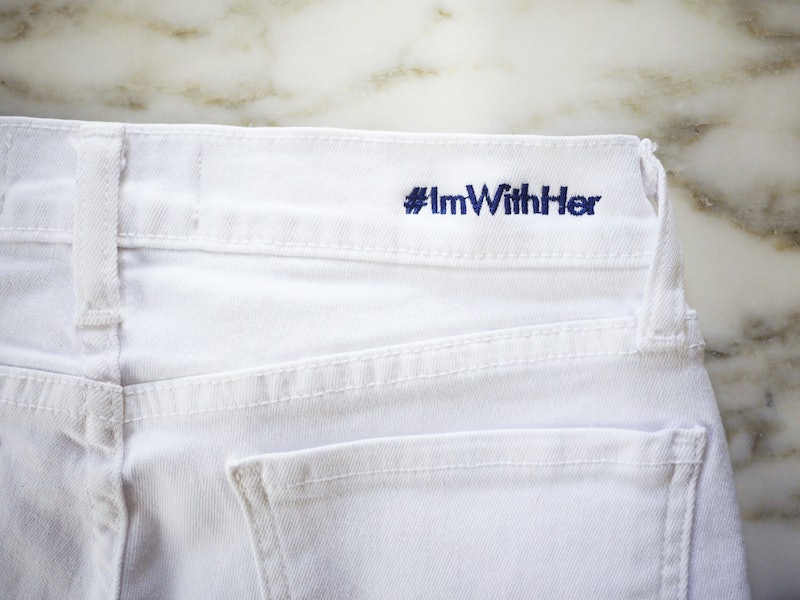 Election season is in full swing and we're all looking for way to support our candidate of choice. If you're with her, you've pretty much just hit the jackpot with Hillary Clinton merchandise. You can now get fashion forward and politically aware denim. Here's where to buy Industry Standard's "I'm With Her" embroidered jeans so you can show your support in style. The small embroidered phrase is a sleek and cool way to show your support for Clinton in a fashionable, understated way.

Bustle spoke with Industry Standard denim founder Nicole Najafi who explained the ideas behind the embroidery and why the brand has decided to hop onto the political train, make a statement, and help their customers do the same. As it turns out, the "I'm With Her" jeans began because Najafi had her personal pair embroidered. She tells us, "I had a pair of my Remys monogrammed "#ImWithHer" and so many people would stop me in the street and ask where I got my jeans, to which I replied, I made them!! (Sort of.) I would also get random high-fives from people and they sparked a lot of productive political conversations, so I decided to make them available to our customers, and it's been a hit so far!"

The embroidery isn't just for supports either. It's for the woman of the hour herself as well. With every Hillary Clinton slogan of #ImWithHer or Hill Yes, Industry Standard will donate 20 percent of the proceeds to the Clinton campaign. Basically, you'll be styling bomb denim and supporting the next president of the United States — fingers crossed, at least!

If you've been looking for a way to rock Hillary Clinton merchandise and be completely stylish, Industry Standard is here to help you out. To purchase the jeans, head over to the Industry Standard website and add the monogram for just $15. However, don't feel limited. Want a different slogan? No problem. The brand will allow up to a 15 character embroidery.

So what are you waiting for? Now that you know where to buy Industry Standard's "I'm With Her" embroidered jean, there's no excuse. Head over, snatch up a pair, and support the Clinton Campaign!