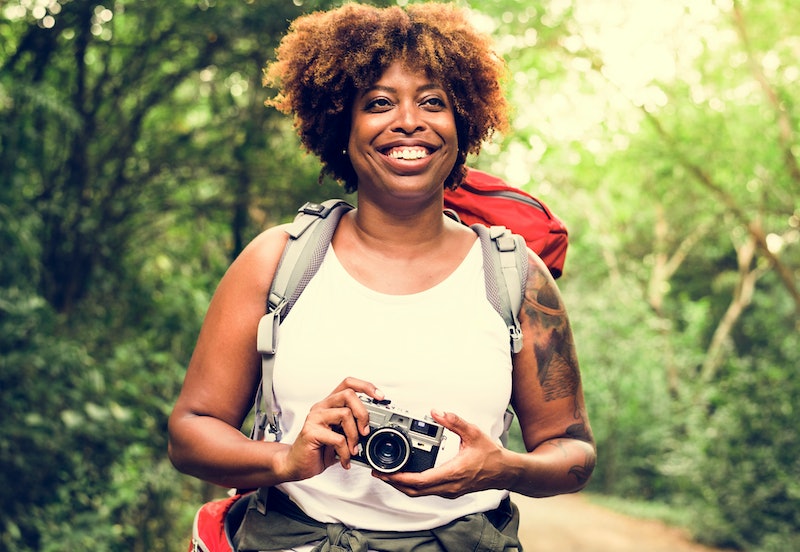 Despite warnings of my elders circa 2000 against tattoos (my skin will fall off, I'll look terrible in a wedding dress, and that they'll look like hell as I age) I never gave into the scare tactics and keep getting ink on my bod. Of course, what non-tatted those elders didn't let me know was that there are weird things that happen to a tattoo that are totally normal — but they can definitely freak you out at the time. To determine why these weird things happen, I found Samantha Danesi, RPA-C, of Sadick Dermatology, a fellow tatted up beaut who just happens to be in the dermatology industry, to share the scientific and completely random reasons for our tats doing those weird, amazing things while healing and when completely healed.

As it turns out, much like when my mother told me to not hold in a sneeze or else my head would pop off, her old wives tails of tats had merit... even if her explanations were a bit exaggerated. Holding in a sneeze while I was 28 did lead to a pinched nerve that was IMO more painful than if my head had popped off. And while my skin has never completely fallen off from a tattoo, you better believe it looked like it might actually happen during the serious shedding that takes place while your fresh ink is healing.

I thought of the most common, weird crap our tats do and thanks to Danesi, I found out why most of them happen.

1. They Feel Raised At Random Times

Right up there with "Who shot JFK?" and "Where the F is Atlantis?" belongs the mysterious question "Why is my tattoo suddenly raised?" According to Danesi, the jury is still out on why tattoos feel bumpy at seemingly random moments. "From personal experience, I do notice that my tattoos do become raised on random occasions. The sites do not appear irritated or itchy…but solely raised," Danesi explains. I haven’t found a specific reason that solidifies my findings, but I do notice that when I am stressed or when I am in a warm environment, they may become raised."

My own previous research revealed similar findings: An allergy to the ink and whacky weather can cause raising, but sometimes it's something as simple as rising blood pressure or a surge in adrenaline. It's really weird, but totally normal.

2. They Scab In A Gross-But-Kinda-Cool Way

Tattoo artists generally insist that scabbing is part of the normal healing process with tattoos, but Danesi warns that if it isn't properly cleaned daily, scabbing can worsen. Since you've punctured the skin with a needle, scabbing doesn't seem totally weird. According to tattoo and piercing website TatRing.com, scabbing on tattoos doesn't necessarily happen all the time, but when it does the best thing you can do is to resist the urge to pick and let them crumble off (I know, gross) on their own.

During the healing phase, there are going to be moments where you'd give up your first born to itch your new work of art. Giving into that temptation is insanely risky: it can expose the tattoo to bacteria creating irritation, infection, and mess with the overall look of your new ink. According Danesi, unless you have an underlying skin condition, like eczema, or an allergy to the ink, that itching should stop once it has healed properly. In the meantime, just keep it moisturized and resist the urge to scratch.

4. The Sharpness Of Your Tattoo Fades

Sadly, the initial vibrancy of your tattoo will fade once healed and throughout time. According to Danesi, "Over time the skin loses collagen and elasticity, which causes the tattoo to blur and fade." Danesi attributes poor aftercare and exposure to sun as culprits that increase the rate your tattoo fades. Allergic reactions to the ink can speed up the fading process too.

Whether you wait two hours or two years before your next tattoo, the thrill of the chair and the fondness of your new ink is a recipe for wanting more. While it is true that having multiple tattoos has gotten more common in recent decades, the BCC reported that people get less compulsive with their ink decisions after their first.

"People typically take between two and seven years before getting their second tattoo," Viren Swami, a University of Westminster psychologist who has conducted extensive studies of people with tattoos, told the BBC.

Don't be concerned if a trail of dead skin begins to follow you around like the Grim Reaper after you leave the tattoo parlor; shedding can be expected over the next two weeks after you get new ink. According to Danesi, "the scabs will flake off during the proliferation phase (growth of new tissue), revealing your newly healed tattoo." Again, you should really avoid picking at these peely bits — as tempting as it is.

7. Your Tattoo Becomes An Almost Unavoidable Topic Of Conversation

Is that new? What is it? Where'd you get it done? What does it mean to you? Yes, the inexplicable thousands of questions you suddenly get when you get a tattoo is one of the downsides and upsides to getting ink. Sometimes, this honestly makes me question my own decisions on why I get ink when I hate talking to strangers. While there isn't any science behind it, be prepared to put on your nice smile (or not) and experience the virtue that is patience.

More like this
13 Caffeine-Infused Eye Creams, Patches, & Serums For Puffy Under Eyes
By Olivia Rose Ferreiro
12 Absolutely Angelic Cherub Tattoo Designs
By Paris Giles
This Week’s New Makeup Releases & More Beauty Headlines
By Audrey Noble and Erin Stovall
The Body Shop’s New Range Has More Antioxidants Than Retinol
By Justine Knight
Get Even More From Bustle — Sign Up For The Newsletter