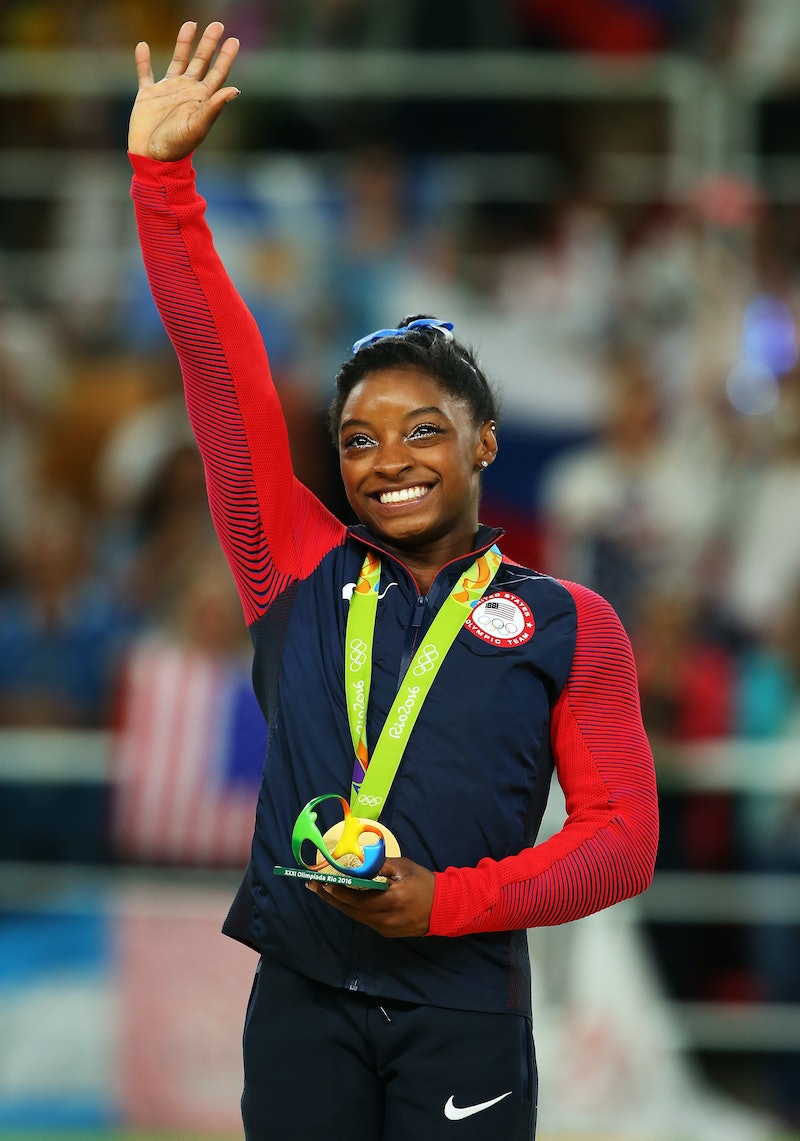 Simone Biles proved a few things today, but most importantly, she showed that she's the world's greatest gymnast and one of the best Olympians we've ever seen. Aside from her incredible floor, beam, bars, and vault routines, Twitter was loving Simone Bile's look for the All-Around competition, where she won gold and totally stole our hearts (once again). Biles told Omnisport, "I’m not the next Usain Bolt or Michael Phelps. I’m the first Simone Biles." YAS, girl. Yas.

While she pretty much rocks any leotard she's in, tonight's was especially touching, donning a blue, white, and red leotard covered in little crystals. It's hard to pay attention to her look when we're literally watching her jump, twist, turn, and land each of her moves. On a balance beam. Let's just think of that for a second. Not only does she stick each and every move, but she does so in a pretty killer look.

According to The New York Times, Team USA's leotards had close to 5,000 Swarovski crystals. Each. Back in 2012, Gabby Douglas' leotard had 1,188 crystals on it. And in 2008, Nastia Liukin's had 184. That's a big jump, no pun intended. Evidently, it had to do with "competitive psychology, adolescent aesthetics, sacrifices made by elite athletes, and technology," according to The New York Times.

How powerful is this?

GK Elite is team USA's outfitters, and according to Rio 2016's website, these looks are designed two years in advance. That's a lot of prep work! And while, of course, Biles is an incredibly talented athlete, I also can't help but fan girl over her (and the rest of the team's) look. Apparently, Twitter can't contain themselves, either.

Biles is a total badass that deserves to be covered in 2,000 crystals! Congratulations to Simone on her monumental win! I can't think of anyone that deserves it more.

More like this
The ‘Kevin Can F**k Himself’ Season 2 Finale Twist Is A Full Circle Moment
By Grace Wehniainen
These SUPER Clever Things Under $20 Are Taking The Internet By Storm
By Julie Peck
Bustle Daily Newsletter: October 3, 2022
By Hayley Schueneman
The Try Guys Clarified Ned's Cheating Scandal Timeline In A New Video
By Grace Wehniainen
Get Even More From Bustle — Sign Up For The Newsletter