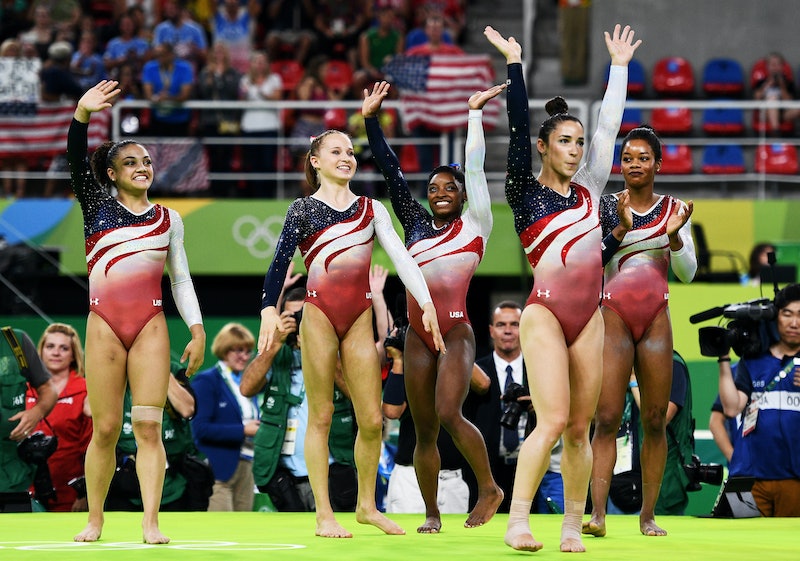 The USA Olympic Gymnastics team is almost as good at slaying the fashion game as they are at winning Gold Medals. The "Final Five" scored Gold at the 2016 Rio Olympics, and they did so in style. If you have been as enamored with the ladies' ensembles as you have by their immense talent, you may be wondering — how many leotards does the USA Olympic Gymnastic team get? The answer may surprise you.

Gymnastics is one of those sports that takes a particularly fun and creative approach to uniforms, and the USA Gymnastic team, in particular, has taken their athletic fashion to a whole new level. If you thought the team's outfits in the 2012 Olympics were good, they ain't nothing compared to what they're rocking in Rio.

With a total of six events consisting of multiple rounds, including Uneven Bars, Floor Exercise, Beam, Vault, Team all-around, and Individual all-around, the girls need a ton of outfit changes. So just how many different leotards does each competitor get? A whopping total of 20. Each gal receives 12 training leotards and 8 for competition, according to The Daily Dot. Wow. That's a whole lot of bling.

The leotards are treated with such meticulous detail, adorned in nearly 5,000 Swarovski crystals per leotard, according to the NBC Olympics website, because when it comes to sparkle, more is more.

20 intricate leotards for five girls of various heights and body types — just think how long it must take to create all of these looks.

In case you're curious, it actually takes two whole years to design and produce all of the Olympic leotards, Cosmopolitan reported.

And with a limited color palette of red, white, and blue, the leotards are super creative with their patriotic designs.

If there were a competition for best Olympic fashion, USA Gymnastics would totally score the Gold yet again.