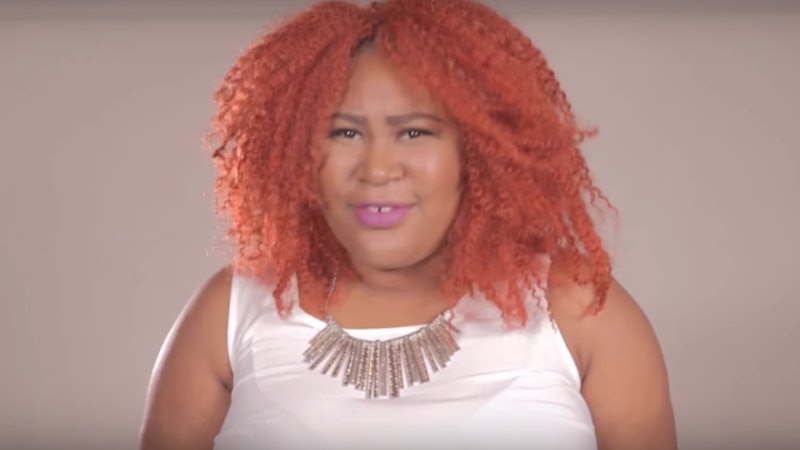 Existing as a fat person usually means facing verbal attacks on the daily. Whether in the form of micro-aggressions from friends, hurtful memes on the internet, or really bad advice from diet-talking relatives, fatphobia is everywhere. Thanks to this reality of living as a fat person, Wear Your Voice Magazine's #FightFatPhobia campaign has been born.

The campaign produced by the intersectional feminist publication is being led by fat activist Rachel Otis, who has spearheaded other body positive campaigns for the site like #DropTheTowel and #BeyondBeauty. While those campaigns focused on physically representing the beauty of plus size people, this one is a little bit different.

The video for #FightFatPhobia focuses on the experiences of fat people, rather than images of fat people. In it, a diverse group of subjects recounts a fatphobic comment they have each received in their lives. In total, 33 comments are shared. To some thin people — many of whom, from my experiences, don't believe that such cruelties could be a reality — many of the comments may seem shocking. To fat people? Well, they're just our day-to-day.

The comments cited have come from friends, family, medical professionals, colleagues, and just about anyone else. Some are intended as compliments, some as constructive criticism, and others as blatant attacks. But all of them are unnecessary and hurtful. They each contribute to a culture of fatphobia, whereby being fat is regarded as one of the worst things a human can be.

Comments from "do you think you intentionally keep weight on to avoid intimacy?" all the way to "I would kill myself if I got fat" prove the unbridled hatred that many people both consciously and subconsciously hold against fat individuals. Dialogue beginning with "no offense, but" is also regularly used as an excuse for vocalizing clearly offensive, hurtful views.

But even throwaway comments — comments that are seemingly meant to be nice — are shared in this video to prove the toxic nature of people's words. "You're so brave to dress like that," for instance, only implies that a person needs to be brave to wear certain outfits once they are of a certain clothing size. Or worse still, implies that the person shouldn't be wearing a particular garment at all.

These kinds of remarks are not one-offs. They aren't sentiments us fatties hear once in a blue moon. These are comments that most of us are presented with not only daily, but hourly.

We read them on our timelines and in almost every mainstream magazine. Even our partners may slip up and share this problematic rhetoric. Thus is the painful reality of micro-aggressions.

This video succeeds in that it presents the fat experience in a matter-of-fact way. This is no style campaign; this is no white-washed attempt at empowerment. Instead, these women are calling out the comments they hear on the regular and, through this compilation, they are showing the world what they have to deal with simply for living in the bodies they inhabit.

As I watch, there is no pretense nor condescending message laid over the top of the campaign. Rather, what these people want viewers to realize is the toxic nature of the words we speak, whether we're knowingly striving for the toxicity or otherwise.

The message is clear: Fatphobia needs to end. Body shaming hurts people. Body shaming even ends lives. No matter the motive behind a comment — be it ~worries~ of health, personal preferences, or even just attempts at compliments — our words are laden with meanings.

By laying out these comments one after the other, the potentially damaging effects of certain words or the phrasing of certain sentences will hopefully become clear to those who never realized them before.

To some, it may seem like a hashtag is not a good enough conclusion for this video, but I feel that the end message is the whole point. The more people who share their experiences with fatphobia, the more obvious it should become to others that this is a very real problem. Be it a bad Tinder response or an incredibly hurtful catcall, comments such as these can often build up within us as people of size. They can chip away at our psyche and self-worth until we cannot bare to be seen. And if we have to experience it, the public deserves to be exposed to it.

Through this campaign, I hope more and more fat people feel comfortable sharing their experiences with fatphobia. As Otis put it in her accompanying piece for Wear Your Voice, "In order to release shame, I firmly believe in reclaiming it. Speaking it. Breathing the eff through it and letting other womyn know that they are not alone. They are seen; they are heard; they are appreciated; and they are loved just as they are."

The experience of fatphobia is valid. It is a direct attack. We do not have to be ashamed by the belligerent, body shaming perspectives of other people, but we do need to call them out.

More like this
TikTok's "Would I Look Good With Short Hair?" Hack Is Genius
By Olivia Rose Ferreiro
If 'Entergalactic' Season 2 Happens, You Could Get A New Kid Cudi Album
By Kadin Burnett
An Honest Review of MeUndies Boxers, According To A Non-Binary Person
By Megan Lasher
Stormzy’s “Mel Made Me Do It” Is A Tribute To Black Talent & Success
By Catharina Cheung
Get Even More From Bustle — Sign Up For The Newsletter