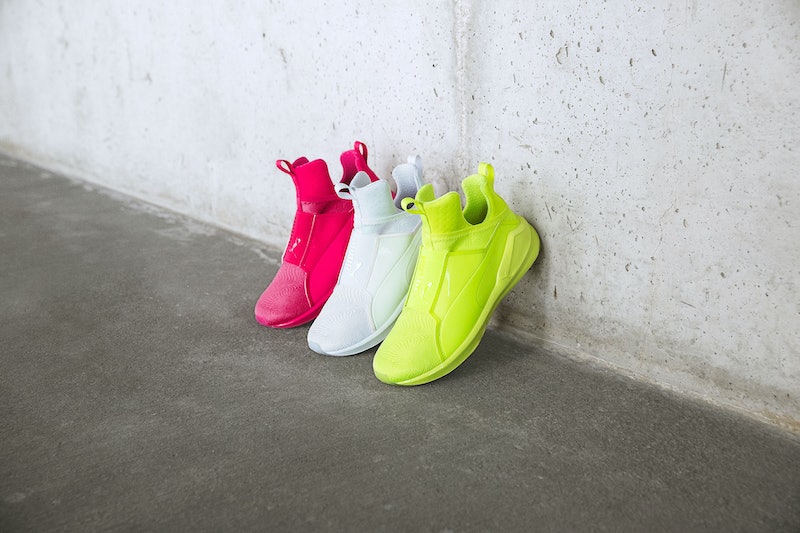 In two days the gorgeous, highlighter hued sneakers can be well on their way to being yours. After all, who doesn't want to be one of the first to snag what's sure to be PUMA's next huge success. At this point, they're practically destined to be as successful as the brand's other launches from this year.

The PUMA Fierce Brights isn't the first shoe to make headlines from the brand. Thanks to an insanely popular collaboration with Rihanna, the brand has become practically known for their shoes. From Rihanna's furry slides to her PUMA creepers, shoes have kind of turned into PUMA's jam.

When the PUMA Fierce sneakers first debuted in a more muted colorway, they were just as popular as I think they're going to be this go around. Thanks to their lace-less design and notable appearance on a star like Kylie Jenner, the sneaker was practically destined for greatest. Now, it's probably even more true thanks to this vibrant colorway.

So if you were hoping to be one of the first to get your hands on the PUMA Fierce Bright Pack, the latest sneakers from the brand launch on August 18. Get your credit cards ready and mark your calendars because they're coming soon.

More like this
17 Brilliant Beauty Advent Calendars You’ll Want To Snap Up For Christmas 2022
By Justine Knight
How To Get Your Hands On The Pat McGrath X Supreme Nail Kit
By Justine Knight
Prefer Alcohol-Free Perfumes? Water-Based Fragrances Are On The Rise
By Audrey Noble
15 Chrome Nail Polish Colors For An Easy, Mirror-Like Manicure
By Audrey Noble
Get Even More From Bustle — Sign Up For The Newsletter