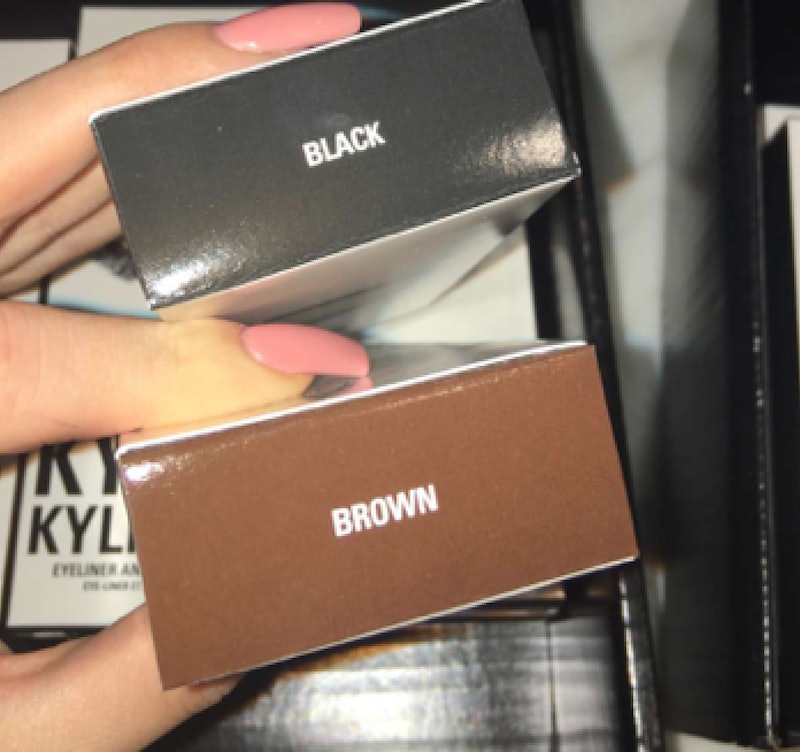 Black and brown are eye makeup basics. But basic does not = boring in this case. Instead, these basics are essential and are often the cornerstone colors on which to build an eye look. Kylie Jenner's Kylie Cosmetics debuted its first Kyliner as part of the gold-drenched Birthday Edition collection, which was limited edition and on sale for only two weeks. The Dark Bronze Kyliner was the first taste of this three-piece eye set, featuring a pencil, a pot of gel liner, and a brush for $38. It was a wonderful introduction and fans, myself included, were hoping Dark Bronze would be added to the regular repertoire of Kylie Cosmetics products. While we still hold out hope for Dark Bronze Kyliner reprise, Jenner has already moved on.

She teased a black Kyliner when her BFF Jordyn Woods wore it in a photo. She also took to Snapchat to reveal the black and brown Kyliners. When can you buy them?

The makeup mogul posted that the black and brown Kyliners, which can be called "kits" since there are three components, are "coming soon." The brand did not confirm the on-sale date just yet.

But I am thinking really soon... like as soon as this week. Why do I think the Kyliners could land this quickly? Here is my theory, backed up by Snapchat screenshots.

Jenner Snapchatted the Kyliner boxes. This looks like the finished packaging to me. IMO, these are ready to be be sold and shipped, like, now. These don't look like prototypes. These look ready to sell and ready to wear.

Further to my point about this week, Jenner also Snapped that the sold-out Bronze Kyshadow Palette, which has the distinction of being her first eye product after nearly a year of lip-only offerings, is coming back. The restock is slated for Friday, August 19 at 3 p.m. PT. Will Jenner introduce the black and brown Kyliners at the same time? She could. Why not make the next restock all about dem eyes?!

All boxed up and ready to go! Hopefully, we can shop the black and brown Kyliners ASAP.

The Kyliners include three items, so you can build a beautifully lined eye. You can customize and play. The Dark Bronze Kyliner was $38, which shakes out to just over $12 per item in the kit. I'm assuming that the Black Kyliner and Brown Kyliner will be the same price, since it's the same pieces.

Woods wore the black Kyliner. She paired it with the Kyshadow Palette. The shadows and the liner are meant to be worn together so they should be sold together, right? No, I am not above willing the Kyliners to go on sale ASAP. That wing, though. That's how you do a cat-eye flick. The new Kyliner colors have been tested and produced. They just need to go on sale at this point.

The Kyliner debuted earlier this month in grand, glorious, and golden fashion. Perhaps Jenner will eventually add the Dark Bronze shade — in regular packaging, of course— to the permanent product lineup. We can only hope, right?