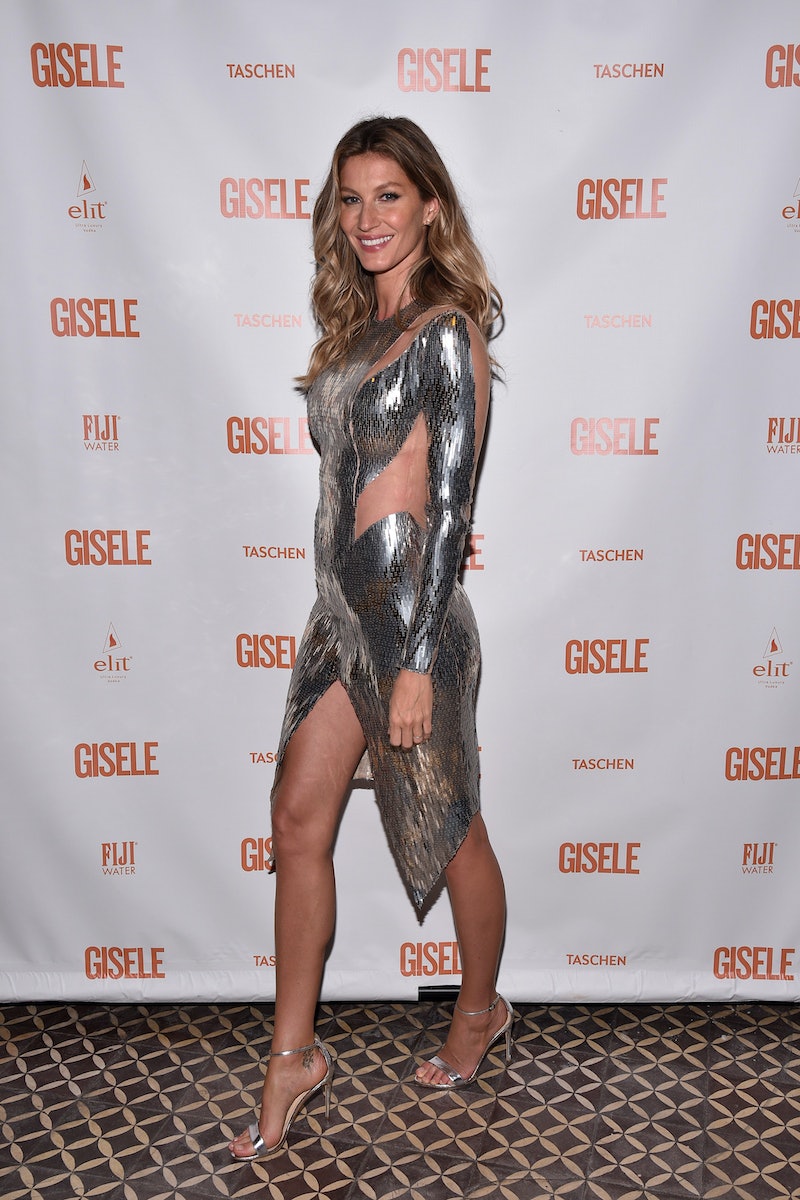 The 2016 Rio Olympics may be coming to a close, but there's one more night to throw a big celebration. Unfortunately, Gisele wasn't at the 2016 Rio Closing Ceremonies, though she opened up the beginning of the Olympics. While we didn't see the model do her thang on the runway like at the Opening Ceremony, she did post a heartfelt photo on Instagram with her sincerest gratitude for the Olympic Games.

In the Rio 2016 Opening Ceremony, Gisele walked a very long runway. So long, in fact, that it sparked some memes. Because of course, the Internet doesn't miss anything. Despite her long walk, she looked absolutely stunning in metallic dress with a dramatic slit down the middle. Her single-strap heels with an ankle strap didn't hurt, either. Simple and classic, her look was perfect for the Rio Olympics.

It's true, though, that the supermodel pretty much rocks any look — whether she's on the red carpet with her husband Tom Brady, or seen in her daily life looking pretty relaxed in jeans and a tee — she always effortlessly pulls her looks off. Some of my favorite looks have been Gisele in Alexandre Vauthier Couture on The Tonight Show Starring Jimmy Fallon and in Balenciaga at the Costume Institute. It's safe to say that this woman has got style.

And, while I was stoked to see what she'd be sashaying down the runway in, I totally get that she's a woman with lots of responsibilities and a full schedule!

She did, however, thank the Olympic athletes, and gave a shoutout to the Brazilian ones. This beautiful photo pretty much captured everything we felt about the olympics: hope, beauty, and strength.

I'm not the only one that's disappointed, though. Many of her fans on Twitter are missing Gisele, too.

Wow, it looks like we're probably going to get memes of how she wasn't at the olympic games pouring in. If we know anything about the Internet, it's that they can't pass up a good meme.

Though we'll have to say goodbye to the over 200 countries participating in this worldwide sporting event, there was at least this last closing ceremony that celebrated the games in absolute style. Everyone, performers especially, looked fabulous. And I can only imagine Gisele looking fabulous while watching this, wherever she is.

More like this
Jack Grealish’s Reaction To England’s New Kit Is The Most British Thing You’ll See Today
By Darshita Goyal
Confused About Blush Placement? This TikTok Makeup Hack Will Help
By Olivia Rose Ferreiro
The Pros & Cons Of The "Moisture Sandwich" Trend, Explained By Derms
By Olivia Rose Ferreiro
Twitter Is Freaking Out Over Rihanna’s 2023 Super Bowl Halftime Show Announcement
By Stephanie Topacio Long
Get Even More From Bustle — Sign Up For The Newsletter