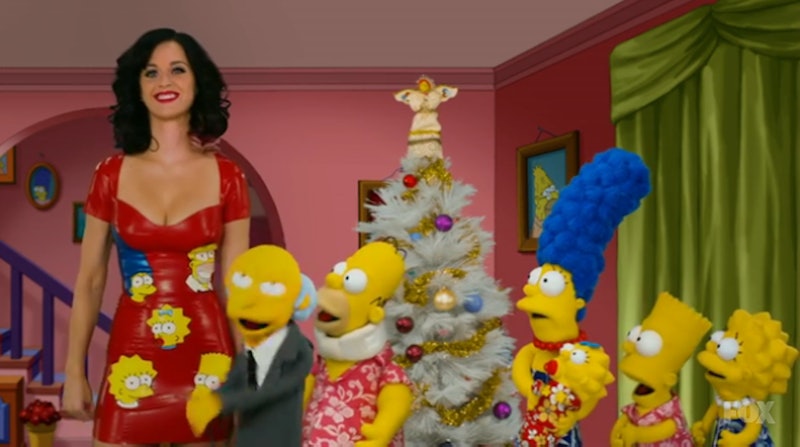 One majorly appealing factor of America's longest-running cartoon series is the casual cameos from some of the world's most famous faces that occur in nearly every episode. But how often are celebrities wearing The Simpsons-inspired clothing or memorabilia, regardless of whether they've appeared on the show or not? As it turns out, quite regularly. With pop culture and fashion constantly inspiring each other, it was only a matter of time before our favorite fictional family began making appearances on clothes that we could potentially own ourselves.

Renowned fashion designer Jeremy Scott often takes inspiration from mainstream cartoons, resulting in his catwalk collections receiving a well-deserved warm welcome from TV junkies, style bloggers, and celebs alike. His recent lines include a collaboration with Moschino and The Powerpuff Girls, but back in fall 2012, he premiered a range of Simpsons-influenced looks.

Eventually, street-wear caught onto using The Simpsons motifs and trendy youth brands as well, with Neff, BAPE, and Drop Dead later releasing their own sartorial re-imaginings of the award-winning cartoon. Some "with-it" celebrities have represented their love for the show by repping these sought-after labels. Others have taken their adoration in a whole different direction. Without further adieu, here are nine celebs who've shown some sartorial Simpsons love.

Sure, this isn't a direct Simpsons reference, but have you ever noticed how often the treats we see on a lot of the OFWGKTA merchandise look like the iconic Homer Simpson doughnut? I've been thinking this since the dawn of time, but surely it's not just me.

Singer Lily Allen has a ring of miniature tattoos around her right wrist, much like a permanent charm bracelet. If you look very closely, there's a tiny Homer Simpson face smiling back at us alongside a Keith Haring barking dog.

Judging by this picture, perhaps the ever-cool Jaden Smith is actually the IRL embodiment of our favorite cartoon bad boy. If you're after more evidence of this, take a peak at his collaboration with Neff and ogle over some more super sick Simpsons-emblazoned merch.

I'm not too sure about the Spongebob photobomb, but model slash actor Cara Delevingne completely rocked this Jeremy Scott two-piece. She was also spotted slaying some rad Simpsons leggings at the airport with Zoë Kravitz once. Talk about keeping comfy in style.

If you cast your mind back to Christmas 2010, you may remember a very strange Simpsons episode that featured the entire cast as puppets with a very human Katy Perry guest appearance. Weird as the holiday special was, the red PVC dress adorned with the faces of the Simpsons family was absolutely outstanding. I would definitely wear this one.

Miley Cyrus looked comfy as anything in this Drop Dead onesie featuring the faces of Itchy and Scratchy. It's definitely a look to cop if you're thinking of inviting a certain someone over for a Simpsons and chill night.

Is this... too much? Here's Halle Berry doing an impeccable Marge Simpson impersonation at Heidi Klum's world-renowned annual Halloween party in 2015. That dress was pretty banging, but I'm not sure about how well the iconic blue tower of hair translated in real life.

Fingers crossed that some of the characters from our fave cartoon will start dressing like the celebrities who impersonated them in the first place. Rocking the Simpsons family in shiny red latex may be a little too weird for most of us, but I'll be over here considering DIY-ing the look anyway.