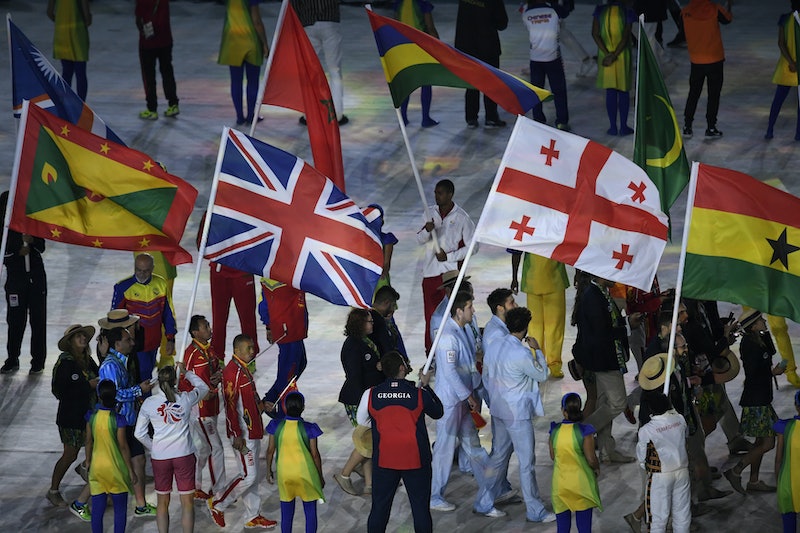 The 2016 Rio Olympics may be coming to a close, but the celebrations are far from over, thanks to the fabulous closing ceremony on Sunday evening. Team Great Britain's light up shoes at the Rio Olympics Closing Ceremony surely stole the show tonight. Though there are so many cute looks (shout out to the band playing music and their colorful outfits), I have to say, Team Great Britain may have stolen the show.

According to the Daily Mail, the 366 athletes on their team are walking with the light up shoes. That's a whole lot of L.E.D.! But dang, does it look good. The reason behind these bright bottoms? The designer (Simon Jersey) wanted to make "fashionable wearable tech more patriotic." Well, mission accomplished!

Their super cool shoes feature red, white, and blue lights built-in to their shoes on their soles. Jersey created outfits for the Olympians "using the South American city's reputation for being the home of the carnival as its inspiration," according to The Daily Mail. The shoes themselves look pretty minimalistic and chic, except for the bright detailing that definitely makes them stand out. And I've got to say, it was a brilliant tactic! They definitely didn't go unrecognized.

The rest of their look consists of red and blue shorts (for women and men, respectively) and a white jacket, according to The Daily Mail. Of course, those two items feature a lion's head, Team GB's emblem. Along with the fierce lion, the jackets will also say "thank you" to Brazil in Portuguese and "hello" to Tokyo, where the next Olympic games will be held. Pretty clever.

And it looks like people are pretty stoked on this look.

While we don't exactly know where to buy yet — stay tuned; there may be more news for where to cop these light up shoes later on. Just be sure to check out Simon Jersey's website! For now, there are definitely some alternatives.

How cool are these?!

Regular sneakers by day, light up kicks by night.

The coolest part of the look? There's a USB charger for the sole. I still remember a world in which we had to disconnect our phones to connect to the Internet. We've come a long way! Congrats, Team GB, for having the coolest look of the evening. I certainly won't forget these.