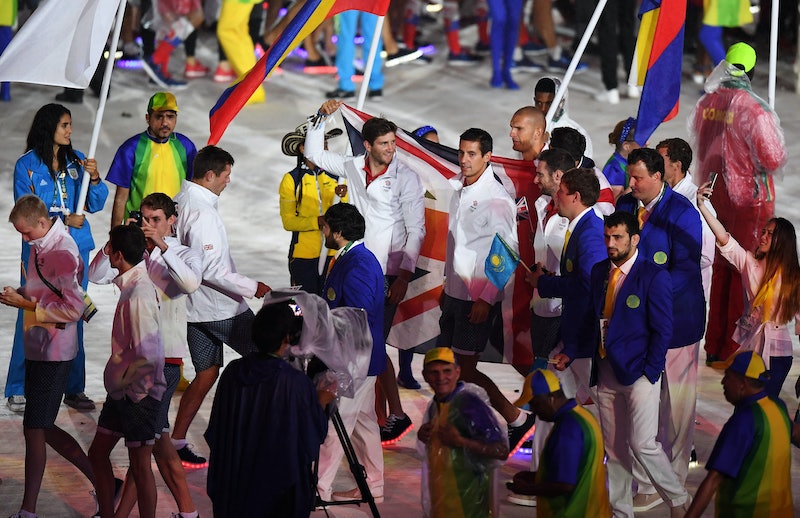 The 2016 Olympics closing ceremony's footwear takes the "lighting up" with excitement to a whole new level, and twitter fans are digging Team Britain's light up shoes, thinking this fashion forward team has set the bar high for shoe companies everywhere.

Of course any standard olympic uniform deserves an extra bit of sparkle and pizazz, and the light up red, blue and white sneakers have everyone going mad for the what's soon to be the latest trend in fancy footwear. If I were in the shoe-making business, I'd be getting a little nervous. Twitter reactions express jealousy, desire and awe: three things that are often sentiments upon watching the Olympic games and admiring the talents of the beloved Olympian athletes from around the world. Apart from mad athletic abilities, their fashion styles are also pretty impressive, and these light up shoes have taken fashion and flash to an extreme.

Plus, Britain has just scored some major points with people from around the world, as who wouldn't want to party with a bunch of Brits and their awesome, bright kicks? Here are some highlights from the Twitter world on feelings towards these crazy shoes, and there's no denying that the footwear was a total, inspirational success.

Yeah, I think I'll hit that party too.

Nah, bro. You're never too old for light-up shoes.

Hah, sorry other countries. Gold medals are for fashionistas, only.

Well, Angelica, you've now found a reason for people to be jealous of your gloriously small, size five feet. Light up shoes for the win!

More like this
The 8 Best Fitbit Bands For Sensitive Skin
By Lauren Moison
Prefer Alcohol-Free Perfumes? Water-Based Fragrances Are On The Rise
By Audrey Noble
How To Get Your Hands On The Pat McGrath X Supreme Nail Kit
By Justine Knight
12 Absolutely Angelic Cherub Tattoo Designs
By Paris Giles
Get Even More From Bustle — Sign Up For The Newsletter