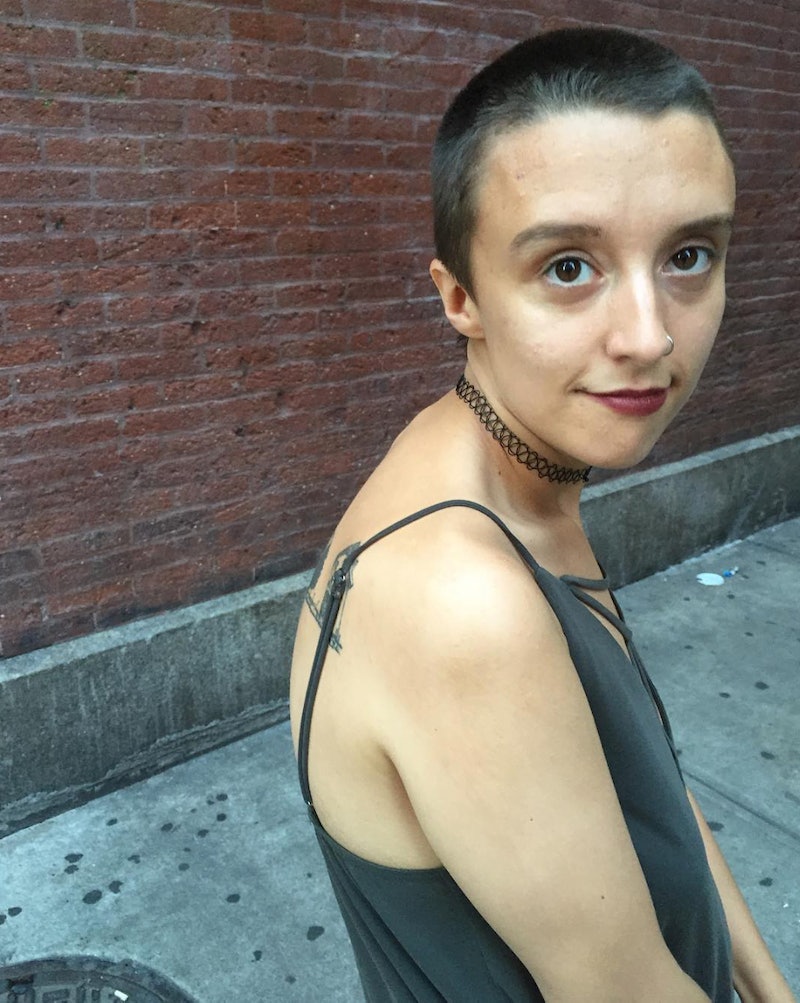 As a gender nonconforming person, the words people use to describe me (specifically regarding my gender) hold a very strong power over how I'm going to feel on a given day. This is especially the case with my gender pronouns, which people tend to slip up on often, using "she/her" instead of my stated preference "they/them." Hearing the incorrect pronouns is uncomfortable. It feels as though the speaker isn't really addressing me, or like I'm being overlooked entirely. This usually makes me disassociate from the conversation and from my body.

Of course, the daunting task of correcting the person misgendering me generally looms in the background of my conscience despite my fear of being assertive about my identity. When the action itself makes me feel overlooked, reclaiming my space and body with a minor correction doesn't always seem like enough.

It's because of this that using the correct pronouns when addressing others is often essential for their body positivity. It's hard to be trans; it's hard to live in a body that doesn't always feel like your own or look how you want it to look. So when folks misgender me, it reinforces my insecurities about my body. It confirms that they see a woman when I'm trying my hardest to be the genuine, masculine me. For this and the below reasons, using a trans or nonbinary person's correct pronouns is essential in supporting their body pos journey.

1. The Wrong Pronouns Can Feel Erasing

Because I look like a woman, I'm sure to tell people my pronouns explicitly in order to feel more comfortable in the social situation and in my body. But when folks who I've told forgo using my correct pronouns (sometimes multiple times), I feel invisible. Despite my confidence — despite my fierce lipstick and cute new top — it's as though no one is seeing or acknowledging me.

This feeling of erasure would understandably work against anybody's journey towards self-love and body confidence.

2. You Might Otherwise Make The Person Feel Insecure About How They Appear

When I'm misgendered, I'm sometimes sent into spiraling thoughts regarding how upsetting it is that I wasn't born into a masculine body. I'm misgendered so often that when folks consistently get it right, I almost feel as though they're just playing along in a somehow make-believe idea that I'm masculine or fluid.

In these situations, I often get stuck in the notion that my identity is a delusion while simultaneously resenting my breasts, small shoulders, and feminine face. Despite what you perceive to be clear feminine or masculine markers on your friends, try to take the time to get the words right. This will help your pal feel entitled to their identity without triggering their aesthetic hangups.

3. Using The Wrong Pronouns Can Heighten Dysphoria Or Disassociation

When you assume someone's gender pronouns based on certain physical features, you run the risk of triggering them to disassociate. Though my gender dysphoria doesn't indicate body negativity or self-hatred, reminding me of the discrepancy between my body and my mind in a public space feels overwhelming and aggressive.

Instead of being at peace with my dysphoria, I often jump to resenting myself when folks go out of their way to gender me in a way that I'm not comfortable with. Having a constant reminder that I don't have what I want between my legs or that folks see me as feminine rather than masculine tears down my body positivity, and even feels abusive in certain instances.

4. You Can Avoid Preventing A Person From Wearing Certain Clothing

Despite my love for short skirts and bold lipstick, having folks constantly misgender me with she/her pronouns makes me want to reject feminine sartorial choices simply to make a point. This reaction often becomes cyclical in nature, as my gender presentation can become more about making a statement and avoiding being mistaken for a woman than out of general preference or emotion.

In reality, I want to embrace both types of presentation, as my crop tops and high-waisted shorties make me feel just as beautiful as a button-up and baseball cap, depending on the day. But with the fear of being overlooked, the empowering act of dressing can become riddled with insecurities and frustration.

5. The Wrong Pronouns Might Make Someone Shrink Into Their Bodies

Sometimes, I feel as though I need to straight-up leave a party or space that just cannot seem to make a genuine effort when it comes to my pronouns. In social settings and events where I'm meeting tons of like-minded folks, it's overwhelming and nauseating to be misgendered multiple times in a row and in ways that I didn't even consider previously.

Although folks misgendering me is often unintentional (at times chalked up to the fact that it's hard to get used to the grammar), it still feels taunting and can trigger overwhelming anxiety — so much so that I no longer feel entitled to the space I'm taking up when faced with repeated misgendering and the need to correct others.

Because misgendering can feel like an act of violence against trans people, your "bad habit" has the potential to drive folks struggling with their body positivism out of both the physical and emotional spaces of belonging.

6. So You Can Communicate That You're An Ally

When you misgender your friends or acquaintances, especially when you do it repeatedly, you're essentially suggesting that you don't care about their comfort enough to support them on their journey towards self-love and actualization. You can't really be a body positive ally, a trans ally, or a friend when you can't even get one very powerful word right.

7. You Can Stop Putting Someone's Body In Danger

In trans communities, being able to "pass" is often what garners the most safety. This is especially the case with trans women. If you don't use your friend's correct pronouns in public, you might inadvertently make them a target of harassment, and even violence, by outing them through the pronouns you choose to use. Please do your friend a favor, and honor who they are — if for no other reason than to keep them out of danger.

In the age of self-education, not understanding how to use "they/them" or "ze/hir" pronouns in a sentence is honestly no excuse for misgendering anyone, especially the people you love. By putting in the work and practicing by yourself if needed, your words alone will support your friend's quest towards radical self-love.

More like this
An Honest Review of MeUndies Boxers, According To A Non-Binary Person
By Megan Lasher
The 19 Best Tweets & Memes About Bisexual Awareness Week
By Lexi Inks
Pro Footballer Zander Murray Is "Blown Away" By Support After Coming Out
By Sam Ramsden
Androgynous Formal Wear That Will Make You Feel *So* Fancy
By Megan Lasher
Get Even More From Bustle — Sign Up For The Newsletter