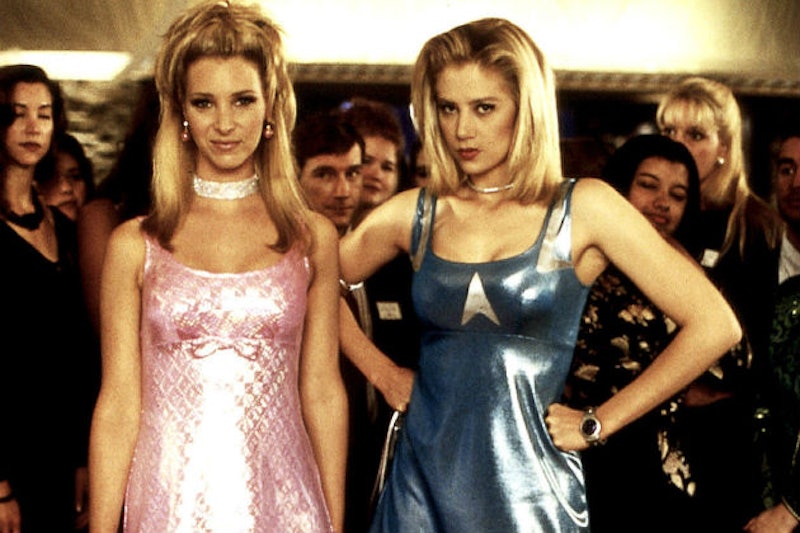 In my humble, kitschy opinion, you have only achieved true BFF status when you've worn matching outfits with your bestie, be it on purpose or by accident. This opinion has probably been heavily influenced by the iconic BFF outfits in movies that most of us see again and again: Looks that are made specifically to showcase the bond between two characters, but also, because they just look so damn good.

Of course, best friends — both in films and in real life — don't have to dress similarly at all. Case in point: Ghost World . Thora Birch's Enid has a much more out-there, referential style, while her BFF Rebecca, played by Scarlett Johansson, rocks a much more laid-back kind of look. While we can easily appreciate and adore our bestie's aesthetics, it doesn't mean we necessarily have to replicate them ourselves.

That said, I still adore and appreciate it when people, film characters especially, opt for matching or complementary outfits. Be it explicitly the same look or ones exemplifying the same train of thought, wearing ensembles that coordinate with those of your BFF is an automatic way to make you both look stylish. Plus, it's also a great way to distinguish your friendship status from everyone else's. If you want proof of concept, you needn't look further than these 15 sartorial BFF masterpieces.

Cher and Dionne's matching tartan outfits encapsulate their own individual styles while cementing their BFF status. But let's be honest: Are any of the outfits in this film not iconic?

Although these looks aren't precisely the same, they stand out as iconic, matching BFF outfits in the sea of minimalist '90s aesthetics.

Sorry (I ain't sorry) about featuring this pair again. But TBH, too many people focus on Romy and Michele's school reunion outfits and forget to pay attention to my favorite matching looks from the film: Their gym-wear. If you ever catch me at a spin class, I hope I'm wearing a shiny two-piece.

Matching cross necklaces and all-around goth vibes? If you're going to be in a witch coven, it's kind of a given that you all have to rock matching BFF outfits.

Arguably one of the most iconic feminist films ever made, Thelma And Louise is also filled with some of the best denim looks ever encountered in cinema.

This is, perhaps, a controversial choice. But IMO, these guys killed it with their sorority vibes outfits.

They were rivals for the entire film until the end scene, which, TBH, is how I picture my BFF and me in my head.

"On Wednesdays, we wear pink." What's more BFF than a friendship dress code, am I right?

I'm a blonde and my bestie is a brunette. We've yet to rock red sequin dresses together, but I think the matching outfits plus contrasting 'dos would suit us well.

The suits in Heathers are iconic in and of themselves, but seeing the whole squad in them really brought the gang together.

This is another film in which the characters only become BFFs at the end, but these immortal babes sure looked glamorous throughout.

13. Valley Of The Dolls' Squad

This whole film is #AestheticGoals and although these girls drift apart as they get more and more glamorous, they set the bar high for iconic female fashion in films. They were the ultimate in '60s glamour.

If you haven't seen Muriel's Wedding, please stop what you're doing right now and watch it. This Australian comedy sees a woman come to her own through a fake marriage and a love for ABBA. Her new BFF shares the Swedish pop band love, and together they perform in a scene that's better than the entirety of Mamma Mia.

This incredibly underrated film has numerous iconic looks in it, but the coordinating red leather jumpsuit and lingerie combination was just killer.

Hopefully this list has inspired you and your BFF to try more matching looks, but if not, there are are at least some killer matching Halloween costume ideas in here.

More like this
Harry Styles’ Red Carpet Looks Have One Thing In Common
By El Hunt
Anne Hathaway Revived 'The Devil Wears Prada' In The Most Andy Sachs Way
By El Hunt
Prefer Alcohol-Free Perfumes? Water-Based Fragrances Are On The Rise
By Audrey Noble
12 Absolutely Angelic Cherub Tattoo Designs
By Paris Giles
Get Even More From Bustle — Sign Up For The Newsletter