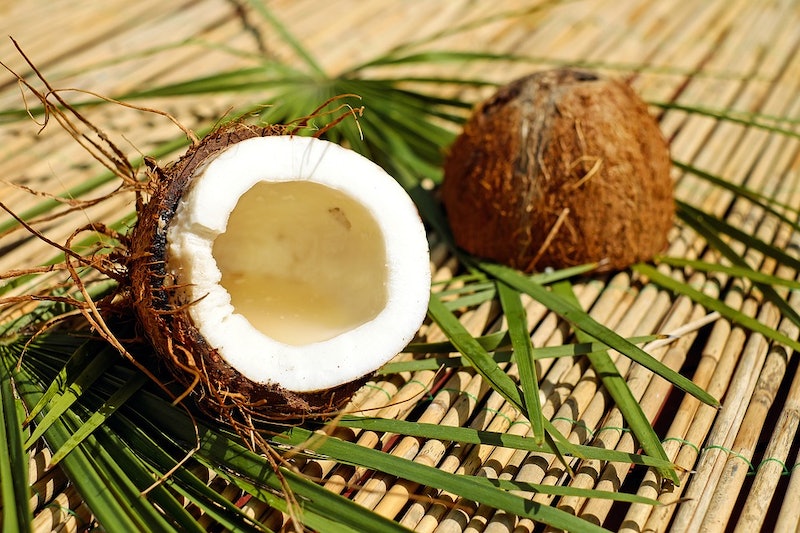 Over the past few years, the beauty industry has heralded coconut oil as the miracle product that can be used for more or less anything. But, before you switch over entirely to a coconut oil filled beauty regime, you might want to know about the risks of coconut oil.

So you probably know about the many benefits of coconut oil, but for those who have been living under a rock for the past few years, here's a little refresher. Coconut oil can be consumed to improve digestion, boost your immune system, and help fight yeast infections among many other health benefits. When it comes to your outsides, coconut oil is great for your face, it helps promote healthy hair, plus coconut oil removes makeup and can be used as a tattoo ointment. This is just the tip of the iceberg when it comes to plus points of this marvelous stuff; it's no wonder the world's gone nutty for coconut oil!

But, like anything in life, coconut oil is not perfect. It may be pretending to be a squeaky clean multi-purpose product, but in reality, it's bound to have a dark side, like the shady secrets of the beauty pageant industry and I wanted to discover coconut oil's mysteries.

While writing a Harvard Health Letter, Walter C. Willett, M.D. discussed the pros and cons of coconut oil. Dr. Willett said, "Coconut oil is about 90 percent saturated fat, which is a higher percentage than butter (about 64 percent saturated fat), beef fat (40 percent), or even lard (also 40 percent). Too much saturated fat in the diet is unhealthy because it raises 'bad' LDL cholesterol levels, which increases the risk of heart disease. So it would seem that coconut oil would be bad news for our hearts."

WebMD reported that the concerns about increased cholesterol levels, "...have not been proven in scientific research. The safety of coconut oil used in medicinal amounts is unknown."

Livestrong reported on a couple of other lesser known unhealthy effects of coconut oil and informed readers that taking coconut oil orally could lead to intestinal distress, "Notably, according to Coconut-connections.com, ingestion of coconut oil may cause diarrhea and other symptoms related to intestinal distress. In order to avoid or minimize these effects, you may want to begin taking coconut oil in smaller amounts and gradually work your way up to a full dose as recommended by your physician or dietitian." Livestrong also touched upon the possibility of some people suffering an allergic reaction to coconuts, "Though considered rare, some people are allergic to coconuts and coconut oil."

According to The Huffington Post, Kristin Kirkpatrick MS, RD, LD, manager of wellness nutrition services for the Cleveland Clinic Wellness Institute, "...cooks with coconut oil about once a week for taste, but is hesitant to use any more than that until there’s more research." She told The Huffington Post that she mainly uses olive oil to cook with and said, “It’s not as sexy, but there are so many more studies about its benefits.”

So, it seems before you go coco-loco, it's probably best to play it safe and use coconut oil sparingly – after making sure you're not allergic to coconuts of course – and wait for more extensive research to be done about the benefits and risks of using coconut oil.

More like this
The Best Skin Care Routine For Eczema, According To Derms
By Paris Giles
Fermented Skin Care's Barrier-Boosting Benefits, Explained By Derms
By Audrey Noble
15 Hibiscus Tattoos That Bring Tropical Vibes To Your Body Art
By Paris Giles
Soho House’s New Skincare Line Doesn’t Require A Membership
By Justine Knight
Get Even More From Bustle — Sign Up For The Newsletter