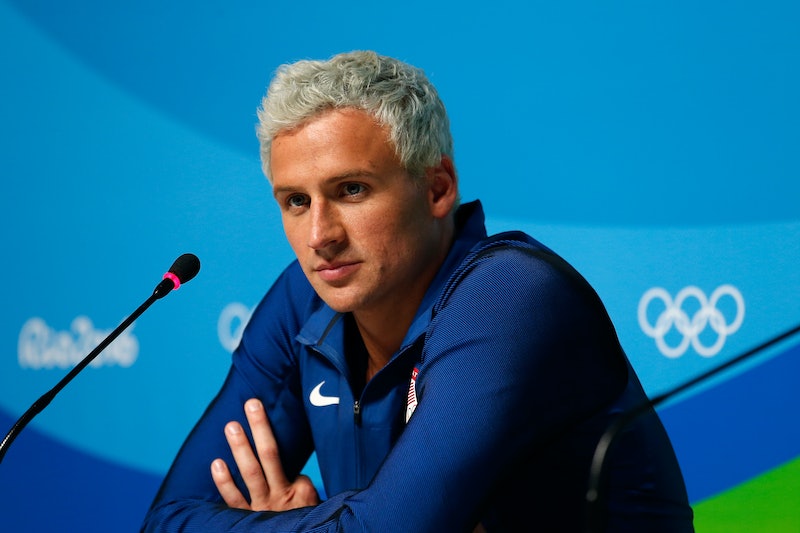 As we've watched a certain Olympic swimmer deal with a highly publicized and controversial event in Rio, there's been a ton of fallout. After his lies in Rio have continued to unravel, Ralph Lauren announced they are dropping Ryan Lochte. As reported by CNBC, "Ralph Lauren's endorsement agreement with Ryan Lochte was specifically in support of the 2016 Rio Games and the company will not be renewing his contract." CNBC also noted that, despite cutting ties with Lochte, Ralph Lauren will continue to sponsor the U.S. Olympic and Paralympic teams — so thankfully, this means you don't have to worry about missing out on your favorite preppy Opening/Closing Ceremony get-up in Games to come.

This news from Ralph Lauren comes straight on the heels of Lochte's being similarly dropped by Speedo — which leaves only his endorsements from Airweave and Gentle Hair Removal left standing (as of right now, Airweave stands by Lochte, while Gentle Hair Removal is reserving judgment). Speedo will additionally donate the $50,000 in sponsorship they were originally to pay to Lochte to Save the Children, a charity affiliate of Speedo benefitting children in Brazil — which is certainly a nice silver lining amidst all the drama and lies.

Lochte released an official apology for his actions on Friday, but it looks like it hasn't gone far enough — especially not where two of his biggest sponsors were concerned.

After all, it's tough to come back from lying about getting robbed at gunpoint, in order to cover up drunken restroom vandalization, right? Perhaps most damning of all is the fact that Lochte now faces investigation by the International Olympic Committee (IOC). As reported by the Guardian, one of his fellow vandals, Jack Feigen, was already ordered to pay a $10,800 fine, and more consequences could be coming down the line — including possible suspension from competition.

It's a disappointing and complicated situation no matter how you look at it, especially when you consider the concept of white male privilege (and the accompanying fact that Lochte is white-passing Cuban-American). Perhaps we'll all have to follow John Oliver's lead, and say goodbye to the Lochte we once knew — even as Lochte himself says goodbye to his lucrative endorsements from Ralph Lauren and Speedo.