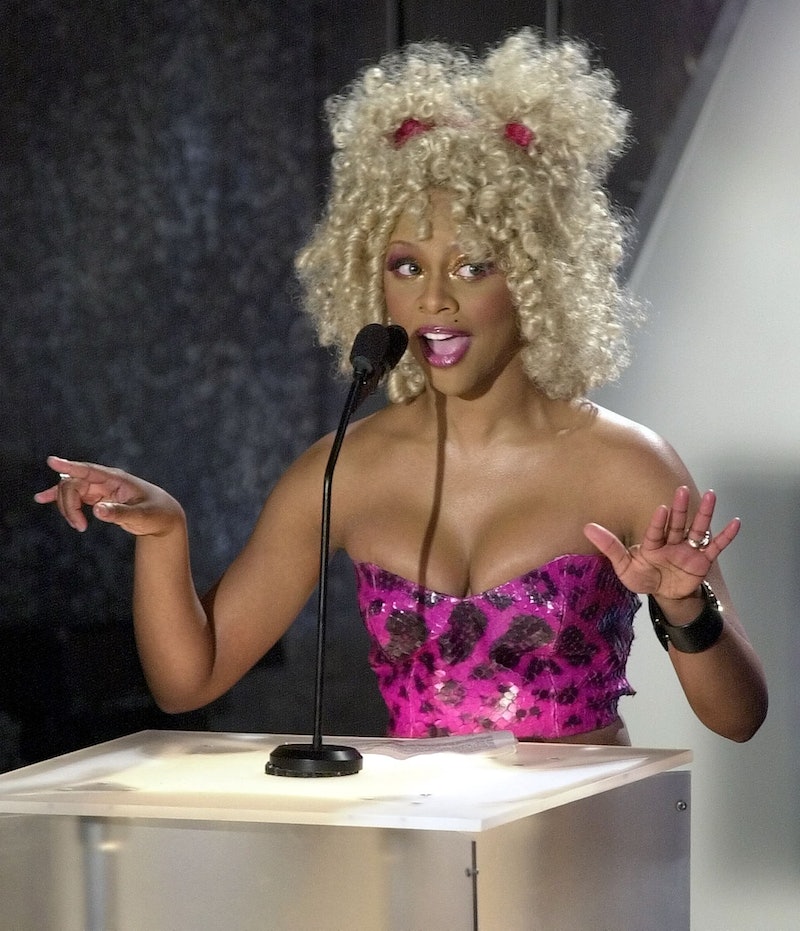 With the 2016 VMAs hitting our screens on Aug. 28, I've been nostalgically reminiscing upon all of the outrageously amazing outfits that have graced the red carpet since the award ceremony's inception 31 years ago in 1984. Lil' Kim's nipple pastie outfit at the 1999 VMAs, in particular, is one look that cannot be topped. While the awards may have developed a rep for inspiring some of the most outlandish looks worn by celebs ever, this one takes my cake.

Color coordinating in an all-lilac, mermaid-themed ensemble consisting of a heavily-embellished, one-shouldered, flare-sleeved, bootcut catsuit, a Halloween shop-style purple wig, matching lipstick, a sequined shell pastie, and oh-so-'90s sparkly wedge platforms by footwear designer of the decade Steve Madden, the look may have originally seemed OTT for most, but made perfect sense for the Brooklyn-born rapper.

Lil' Kim built her reputation during the '90s, in part, through her raunchy ensembles and explicit lyrics to match, with her "out there" sartorial decisions and don't-give-an-eff attitude undoubtedly paving the way for contemporary peers such as Nicki Minaj or Azealia Banks.

Flash-forward nearly 20 years, and it's pretty rare to see an A-lister sport anything but couture designed buy a high-end fashion designer or big name brand when walking the red carpet. But what is now considered one of the rapper's most memorable looks wasn't stitched by an industry name or conjured from the imagination of a Parisian fashion house. Instead, the mermaid fantasy look of my dreams can be credited as the brainwork of Lil' Kim's stylist at the time, Misa Hylton.

During the awards ceremony, Diana Ross may have seen Lil' Kim's bare breast as a prime opportunity to get up close and personal and (consensually) have a bounce session, but she wasn't the only pop star to appear in awe of the singer's outfit.

Updating the look for the post #FreeTheNipple generation, Miley Cyrus paid homage to the queen of rap with her own take on the iconic VMA moment for her Halloween costume circa 2013.

Never one to do things by the halves, Cyrus perfectly recreated every inch of the outfit. It was an effort that didn't go unnoticed by Lil' Kim herself, who tweeted after seeing the photo, "Awwww. Look at my baby @mileycyrus tonight!!! Looking GORGEOUS!!! I wish I was there to squeeze your boob :) :) Love…"

Although I'm not sure anyone will be able to top the sheer impact of Lil' Kim's catsuit in modern-day popular culture, I can only wait with baited breath and hope that someone sports something equally iconic come Aug. 28.

More like this
Everything To Know About Taylor Swift’s 10th Studio Album, 'Midnights'
By Grace Wehniainen and Jake Viswanath
These Are The Best Socks A Woman Can Buy
By Lisa Fogarty
The 2022 Emmys' Top Nail Trends
By Olivia Rose Ferreiro
How To Wear A Bucket Hat Like Rihanna, Dua Lipa, & More
By Allie Fasanella
Get Even More From Bustle — Sign Up For The Newsletter