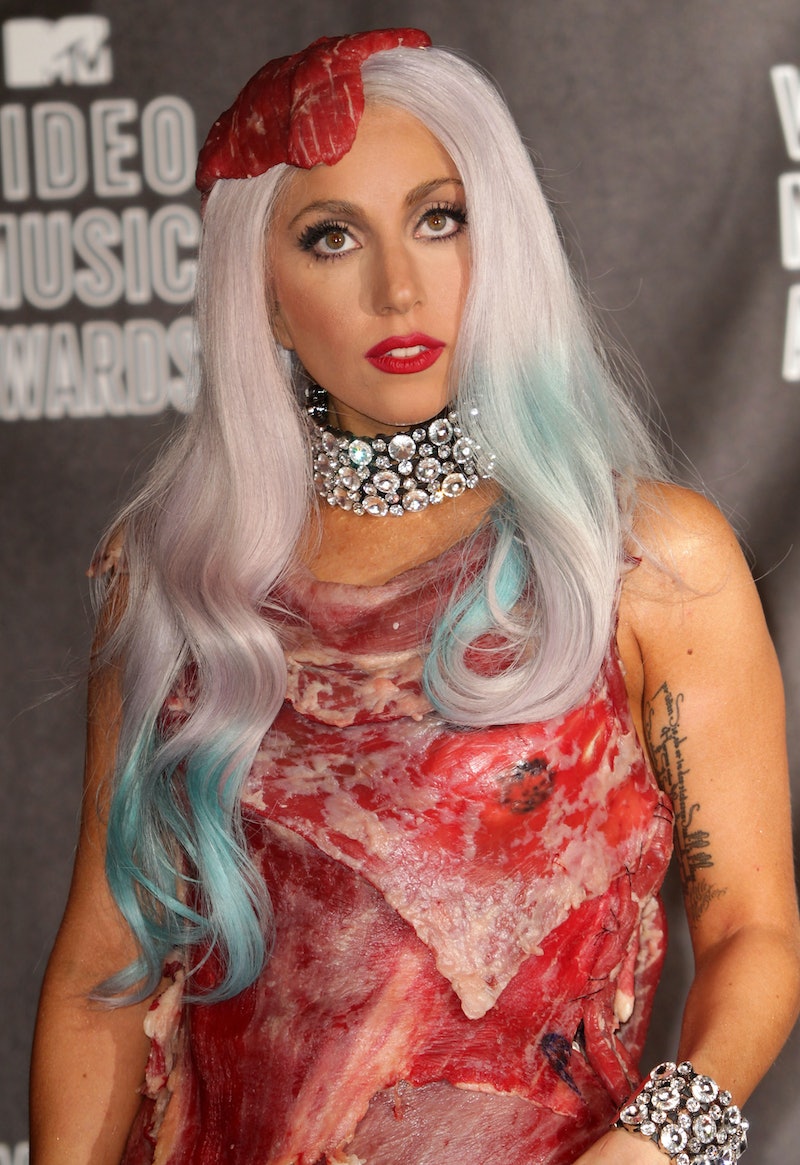 The VMAs aren't shy of a healthy dose of controversy, whether in regards to celebrities' choice of outfits when walking the red carpet or mic-stealing moments during the ceremony. But Lady Gaga's meat dress at the 2010 VMAs may just top it all. It's even more iconic than Lil' Kim's boob-baring mermaid catsuit or the infamous make-out moment between Britney Spears and Madonna.

If you rewind the clock to six years ago, you might recall that 2010 was the year Gaga was the most-nominated artist of the ceremony, with a then-record amount of 13 nominations across categories including Best Female Video and Video Of The Year.

Yep, Gaga was arguably at the top of her game. But despite her previous outlandish fashion outings and reputation for championing all things out-there, she wasn't at her most controversial until donning the dress made entirely from cuts of flank steak beef to pick up her award for Video Of The Year. Taking home the trophy for "Bad Romance," handed out by Cher, Gaga joked, "I never thought I'd be asking Cher to hold my meat purse."

Though it may be her most memorable look to date, it wasn't Gaga's only outfit of the evening. Previously donning looks by iconic designers Giorgio Armani and close collaborator Alexander McQueen, the meat dress made up her third ensemble of the evening and was the brainchild of lesser-known designer Franc Fernandez and her then-stylist and current Creative Director of Diesel and Nicopanda, Nicola Formichetti.

Of course, it would probably be naive to assume Gaga could rock a dress made entirely of meat without coming under fire from animal rights activists as well as vegetarian and vegan organizations. In Sept. 2010, the singer spoke to Ellen DeGeneres, a vegan, on her show, revealing that the outfit was meant to be a statement against the U.S. Military's "don't ask, don't tell" policy.

She told DeGeneres, "If we don't stand up for what we believe in, if we don't fight for our rights, pretty soon we're going to have as much rights as the meat on our bones."

However, her explanation wasn't really enough to deter various condemnations over her choice of material, with animal rights group PETA releasing a statement outlining the offense. According to PETA, "There are more people who are upset by butchery than who are impressed by it — and that means a lot of young people will not be buying her records if she keeps this stuff up."

Whichever side of the fence you were on, it still seems that Gaga's meat dress won't be slipping out of consciousness anytime soon. The dress went on display in 2011 at the Rock And Roll Hall Of Fame after a taxidermist was hired to preserve the meat as a type of jerky, Rolling Stone reported.

While I'm not sure anyone will be able to top the infamy of Gaga's most controversial look come the upcoming 2016 installment of the awards on Aug. 28, I'll certainly be tuning in to find out. If anyone's going to do it, though, my bet's on Gaga herself.

More like this
Everything To Know About Taylor Swift’s 10th Studio Album, 'Midnights'
By Grace Wehniainen and Jake Viswanath
Tilda Swinton’s Neon Yellow Hair Is More Than A Style Statement
By Justine Knight
Serena Williams Looked Like Royalty In A Bodycon Velvet Dress
By Allie Fasanella
The Royals Must Follow Strict Fashion Etiquette For The Queen’s Funeral
By Darshita Goyal
Get Even More From Bustle — Sign Up For The Newsletter