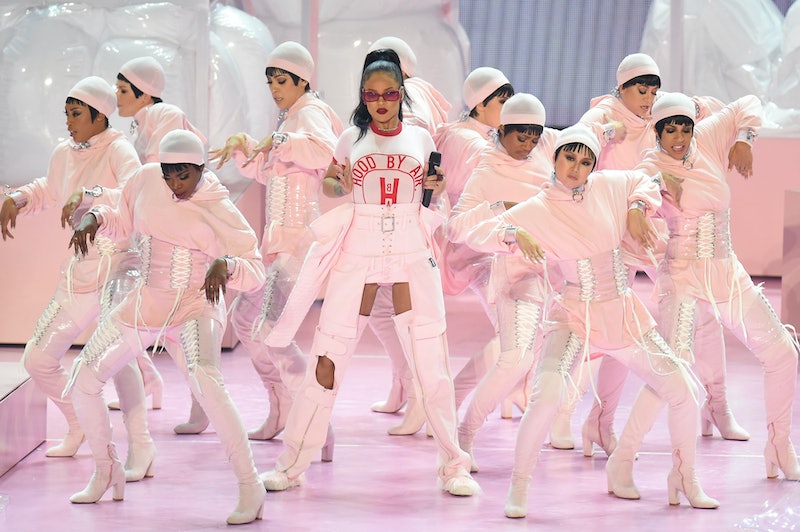 When it comes to anything bold, Rihanna isn't one to shy away — whether through hard-hitting lyrics, fearless dance moves, or her fashion choices. Rihanna's 2016 VMAs performance outfit was certainly no exception, considering she opened up the show wearing a Hood By Air T-shirt and white skirt combo. Understandably, Twitter has been freaking out.

It's nearly impossible to not think of fashion when Rihanna comes to mind. Sure, she's a singer/songwriter and a fabulous dancer, but she's a fashion icon, too. Let's take a trip down memory lane, shall we? First of all, I will never forget that bright yellow Met Gala dress from 2015 that not only turned heads, but conjured up some pretty hilarious memes, too. Then there was her "B*tch Better Have My Money" latex look. And let's not forget about her ability to essentially turn wine glasses into accessories.

The point is this: Rihanna doesn't just wear clothes. She turns them into art. Every look she's put together as of late has made a statement. The awards on Aug. 28 mark a big night for RiRi, as she's receiving the 2016 VMA Vanguard Award. Titled "The Michael Jackson Video Vanguard Award," it's been given to icons like David Bowie, The Beatles, Beyoncé, and, of course, Kanye West.

So it's no surprise that she went all-out and more for the opening performance, clad in a white and red T-shirt, a belted skirt type of piece, and white over-the-knee boots. Simple, clean, and classic Rihanna, this look matched her killer performance.

RiRi was magic. She performed "We Found Love" and "Where Have You Been" and totally slayed everyone.

I'm obsessed with those sunglasses, too. She's into super cool eyewear right now, and these are no exception.

And, of course, Twitter is going nuts regarding her hype performance.

Yeah, it's safe to say that RiRi's a fashion influencer. And luckily for us, it was revealed that she's performing three more times throughout the evening. BRB, getting my inhaler.

Next up, Rihanna performed a mash-up, starting with "Rude Boy" while sporting a bra, T-shirt, and trouser combination, complete with a do-rag.

As "What's My Name" began, she and her dancers lit up the stage. And once again, RiRi got all the reactions on Twitter, both bad and good.

For her final performance, Rihanna started things off by singing "Needed Me," wearing a jacket and bodysuit combo, fur throw, and some thigh-high boots.

Again, she got some mixed reactions.

And for RiRi's last performance, the babe kicked it off with "Stay" in a voluminous cream gown that was belted, showing us that she can totally slow things down and still kill it.

A huge congratulations to Rihanna tonight. This award is well-deserved, thanks to her contributions not only in music, but in the art of fashion.

More like this
Everything To Know About Taylor Swift’s 10th Studio Album, 'Midnights'
By Grace Wehniainen and Jake Viswanath
Harry Styles’ Red Carpet Looks Have One Thing In Common
By El Hunt
Twitter Is Freaking Out Over Rihanna’s 2023 Super Bowl Halftime Show Announcement
By Stephanie Topacio Long
7 ‘Ugly’ Trends Kendall Jenner Makes Look Cool
By Allie Fasanella
Get Even More From Bustle — Sign Up For The Newsletter