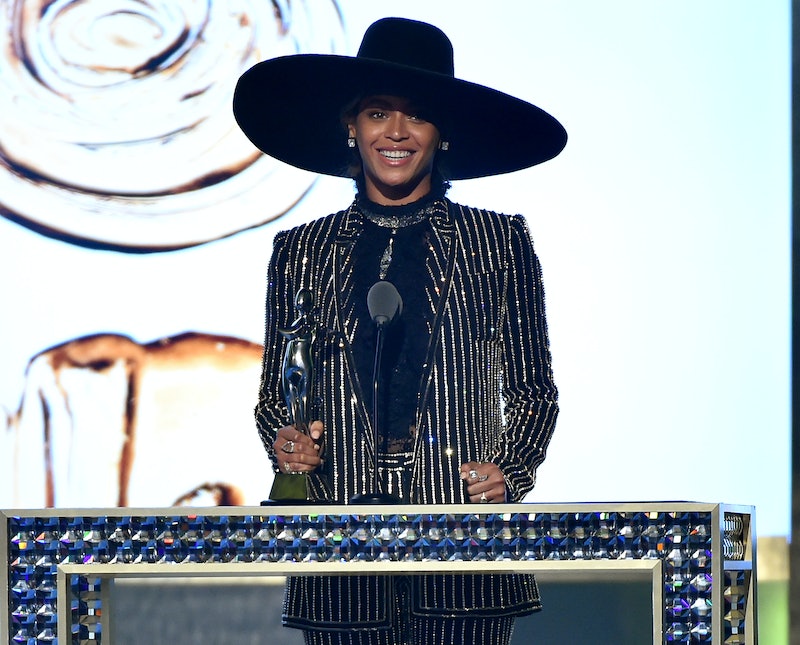 Rumors that Beyoncé is planning on a secret performance for the 2016 MTV Video Music Awards are flying. While we speculate on what Queen B may do, I personally want to contemplate what Beyoncé will wear to the 2016 VMAs. There's no doubt in my mind that Beyoncé will slay, but in what, exactly, will she slay? I can only hazard guesses at this time. But considering the fact that I once successfully envisioned what Beyoncé's tour outfits would look like, I'd like to think you're in good hands.

So let's start with Beyoncé's VMAs outfits over the years: Red carpet looks consisting predominently of gorgeous gowns while the onstage ensembles were all about playsuits. In recent years, the sequined romper has been a key aspect of Yoncé's stage look, although previously the singer opted for shorts. Before that, she was all about rocking matching outfits with her Destiny's Child band mates.

For this reason, it's likely that Beyoncé — if she is performing at the 2016 VMAs — will sport two outfits to the awards ceremony: One for performing in and one for the red carpet beforehand. Thanks to her past looks, I'm 90 percent sure that the singer will wear a beautiful gown, followed by a quintessential bodysuit. How she's going to outdo the custom bejeweled Tom Ford playsuit from her last VMA performance in 2014, however, is yet to be seen.

Due to the political nature of Beyoncé's nominations for the VMAs, though, I wouldn't be surprised if she pulled out an outfit and performance that were a lot more politically-motivated. Remember her Black Panther-inspired Super Bowl moment earlier in 2016?

Of course, this is all speculation, particularly since it's not yet confirmed that Beyoncé is performing at the VMAs. Bey loves a good surprise performance, though. Following her BET Awards show in June 2016 — a performance that featured a bodysuit, of course — we can only hope for yet another sneaky surprise.

Fingers crossed that Beyoncé chooses to bless us all with another shock to the system. If she does, my bet's on Queen B rocking some kind of fabulous romper yet again.