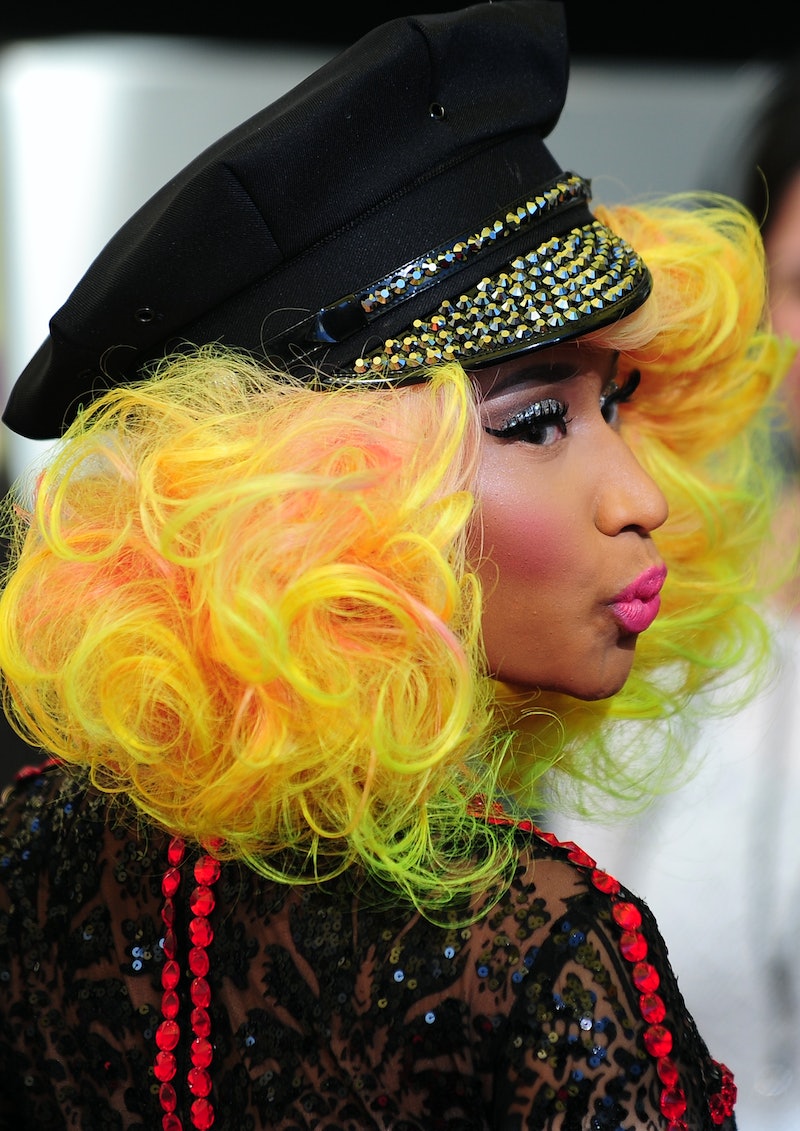 While the VMAs might be known for some seriously amazing musical acts as well as a celebrity feud or two (hello, Kanye and T. Swift), the ceremony is also renowned for its standout beauty looks. Music’s A-listers pull out all the stops for beauty looks at the MTV Video Music Awards, whether that means pink hair, mohawks, or statement eyeliner. So in celebration of the 2016 VMAs, which air on Aug. 28 at 9 p.m. ET, I’ve rounded up some of the zaniest, wackiest, and most original beauty looks of VMAs history.

MTV red carpets have grown iconic for repping quite a few fashion risks, and after perusing pics from VMAs past, I think it's apparent that the awards are also home to a wacky beauty moment or five. From Kesha's technicolor face paint to Gwen Stefani’s flower power, Harajuku-style buns to a Pepto pink-haired Katy Perry, the VMAs red carpet is a place for celebs to bring out their beauty A-game, and I expect nothing less from this year's awards show.

Whether you are planning to tune into the Aug. 28 VMAs, or you just like a funky beauty moment every now and again, scroll down to see the most wacky, bedazzled, and highly-pigmented hair and makeup looks from the history of the ceremony.

Miley Cyrus rocked the mini buns at the 2013 VMAs long before they were trending.

The TLC ladies sported every major hair trend of the early 2000s at the 2002 VMAs.

Never one to shy from a beauty risk, Nicki Minaj sported a highlighter hairdo and hat combo at the 2012 VMAs.

Leave it to Molly Sims to look ultra chic in a beret at the 2002 VMAs.

Christina Aguilera makes this roundup yet again because of her black and white hair color and phenomenal braids that she sported back in 2002 on the VMA red carpet.

Drew Barrymore looked super sweet with her daisy-adorned hair at the VMAs.

We can always count on Gwen Stefani for an A+ beauty look on the red carpet, and this Harajuku-style hairdo that she sported at the 2004 VMAs was perfection.

In 2010, Lady Gaga surprised us on the red carpet yet again with this masterful hair piece.

Let's take note from J. Lo's hat and chandelier earring look that she sported at the 2004 VMAs.

A 2004 Paris Hilton sported a bronzed and platinum look on the VMAs red carpet.

In 2015, Ellie Goulding rocked a perfectly-polished yet electric 'do on the VMAs red carpet.

Katy Perry polished off her look with a sleek pony and gold grill at the 2013 VMAs.

At the 2010 VMAs, Kesha was painted to perfection in various colors of the rainbow.

This may not look super drastic, but The Biebs' 2015 pompadour hairstyle was a major departure from the classic 'do he sported for so many years.

In 2010, Taylor Momsen shocked plenty with her heavily-lined eyes and rocker chic look.

Lady Gaga's glitter eyebrows and bold lips from 2011 are back in style again.

In 2011, Katy Perry sported a retro look topped off with pink locks.

With so many funky beauty looks from VMAs past, I can't wait to see what celebs will rock in 2016.

More like this
Everything To Know About Taylor Swift’s 10th Studio Album, 'Midnights'
By Grace Wehniainen and Jake Viswanath
Tilda Swinton’s Neon Yellow Hair Is More Than A Style Statement
By Justine Knight
The Best Celeb Looks From Tommy Hilfiger’s NYFW Show
By Dominique Norman
Bella Hadid's Best Fashion Week Runway Looks To Date
By Allie Fasanella
Get Even More From Bustle — Sign Up For The Newsletter