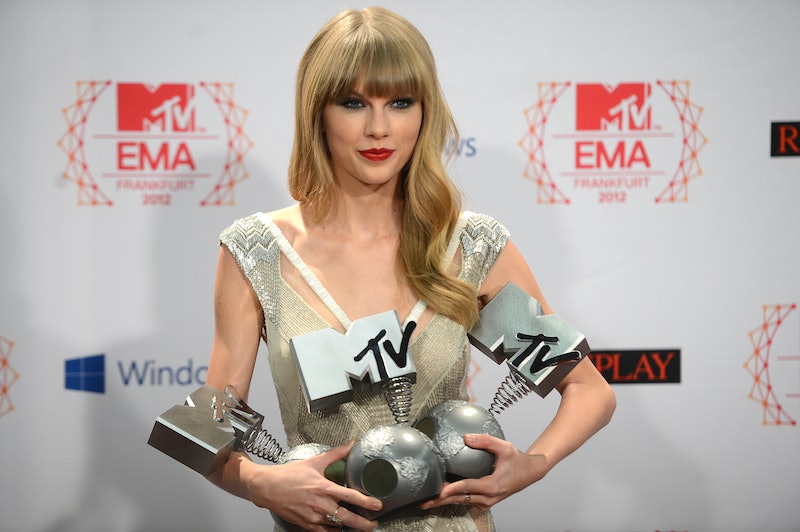 As Taylor Swift went from country starlet to pop sensation, her style also dramatically changed. And one place where we can see that clearly is in Taylor Swift's VMA style evolution. Through her nearly 10 years of attending, she has gone from being a demure and sweet teen with the aesthetic to boot to a bold, playful fashionista. Whether you love or hate her, you have to admit she has some pretty fun outfit choices under her belt.

Back in 2008, when T. Swift first made waves in the music world with her heartfelt country love songs, her wardrobe reflected that same romantic heart. She would show up to award shows in a variety of different cupcake-sweet, vintage-inspired frocks, highlighting her penchant for old-fashioned romance. But as she slowly made the shift from country to pop, her outfits became more adventurous and experimental. Gone were the sweetheart necklines and in their place were hot pants and sophisticated gowns.

This makes sense. I mean, give yourself a decade and you too will change your personal style. Below is Swift's VMA style evolution, tracking her teenage dresses up to her 20-something playsuits and two-pieces. It'll be interesting to see what the upcoming years might bring.

She was literally all sugary sweet here. With everything from the A-line skirt to the dangly charm necklace, Tay Tay was basically the epitome of a teenage girl out to a dance.

Here Swift traded in her pale pastel dress for a hot, sizzling punch of red. While the statement now holds more of a kick, the dress is still pretty similar to the one from the year prior. That is perfectly fine, of course. The girl knew what she liked.

Yep, we were still doing the whole 1950s high school sweetheart thing in 2010.

May I introduce to you the beginning of Swift's style evolution: This vintage siren of a dress. She looked like something straight out of the black and white screens of Old Hollywood, adding sparkle and sensuality to her aesthetic.

In 2013, Swift's style seemed to become more sophisticated, whereby she would opt for the clean and simple lines of designers like Calvin Klein. She seemed to enjoy well-made, minimalist dresses that would feature one show-stopping detail, like a high slit or a plunging neckline.

While parading in clean-cut dresses will ensure you a timeless and classic style, Swift wasn't afraid to get a little more daring in 2014. She showed up in a long-sleeve romper that balanced out its modesty with a hot pant bottom. The icy blue color contrasted in a fun and clever way with her burgundy booties, and there was plenty of sparkle on the piece to make her stand out.

In 2015, Swift decided to keep the bold looks coming. She opted for a two-piece ensemble that consisted of a cropped sweater and roomy pants that came in a metallic houndstooth print. It was nothing short of lively, and hinted at a new and daring aesthetic.

While Swift might not show up to the VMAs this year, one thing is for certain: Her evolution has seen her go from demure to fearlessly bold.

More like this
Everything To Know About Taylor Swift’s 10th Studio Album, 'Midnights'
By Grace Wehniainen and Jake Viswanath
Taylor Swift’s Latest ‘Midnights’ Look Went Heavy On The Glitz
By Allie Fasanella
There's A Taylor Swift Easter Egg In Ryan Reynolds' 'Deadpool 3' Teaser
By Marina Watts
Christian Bale Sang With Taylor Swift & His Daughter Can't Believe It
By Radhika Menon
Get Even More From Bustle — Sign Up For The Newsletter