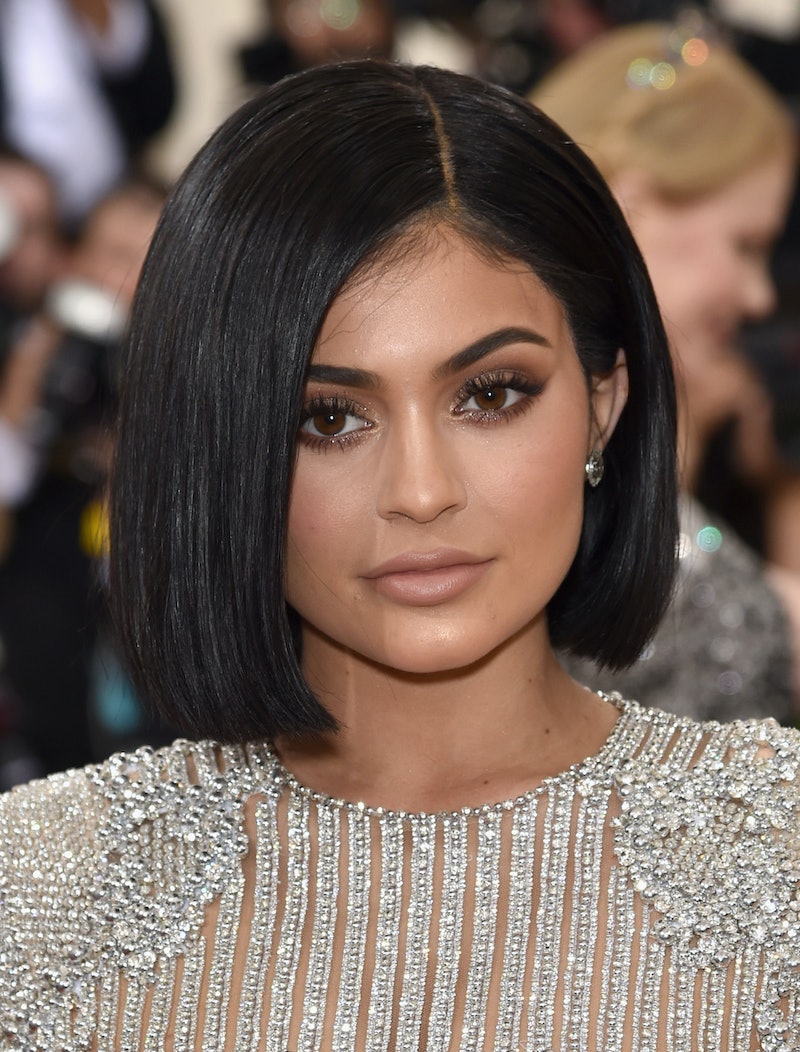 From athleisure to matte lipstick, Kylie Jenner has arguably set all the major trends for summer 2016, and her latest 'gram reveals the newest look to get behind. Kylie Jenner’s Von Dutch co-ords that she posed in for an Instagram shot on Aug. 28 are a nod to early 2000s branding and further proof of the early aughts comeback. While it’s no surprise that Jenner is sporting yet another new millennium trend — she is often spotted in logo mania attire and belly-baring tees — this co-ord outfit is a relatively new aesthetic for the 19-year-old reality TV star.

Unlike the co-ords Taylor Swift made famous, King Kylie’s set is made up of a sports bra and tube skirt emblazoned with labels from the 2000s trucker hat brand that Paris Hilton adored: Von Dutch. Being that Von Dutch is the most quintessential early aughts brand, and that Jenner basically revived the '90s singlehandedly, I think it is safe to say that we'll all be seeing early 2000s fashion more now. And the 13-year-old in me couldn’t be happier.

Although Jenner may be at the forefront of the early '00s sartorial revival with her Von Dutch set and athleisure apparel, she isn’t the only one rocking the trends of the early millennium. From Gigi Hadid in an off-the-shoulder crop top and low-slung pants to Selena Gomez in Vetements sweatpants, a white sports bra, and oversized jean jacket, all the major style stars are rocking the hottest looks of the 2000s. And it’s about time you take note, if you haven’t already.

While the '90s revival has been fun, the early 2000s bring on some fresh style inspiration and a whole lot of nostalgia that my wardrobe could use right about now. Sure, I still reminisce about those not-so-stylish days when I rocked butterfly clips and gauchos, but how could I not be thrilled about micro minis, tracksuits, and low-slung jeans?

It's true that the early 2000s might often get a bad rep, but the revival gives us the chance to fix our teenage fashion mishaps. So while I plan to forgo the dresses over pants look, hot pink trucker hats, and pocketless denim, I can’t wait to rock Kirsten Dunst-inspired micro minis, Sporty Spice-style track pants, and spaghetti strap belly shirts that Britney Spears made so famous.

With the return of the early aughts, it's time to look to King Kylie for some major inspo.

More like this
Early 2000s-Era Rhinestone Tattoos Are Back, Baby
By Jordan Murray
Netflix Reveals First Look At Wednesday In The 'Addams Family' Spinoff Series
By Bustle Editors
Kenan & Kel Just Reunited At The 2022 Emmys & Twitter Is Overjoyed
By Grace Wehniainen
Tilda Swinton’s Neon Yellow Hair Is More Than A Style Statement
By Justine Knight
Get Even More From Bustle — Sign Up For The Newsletter