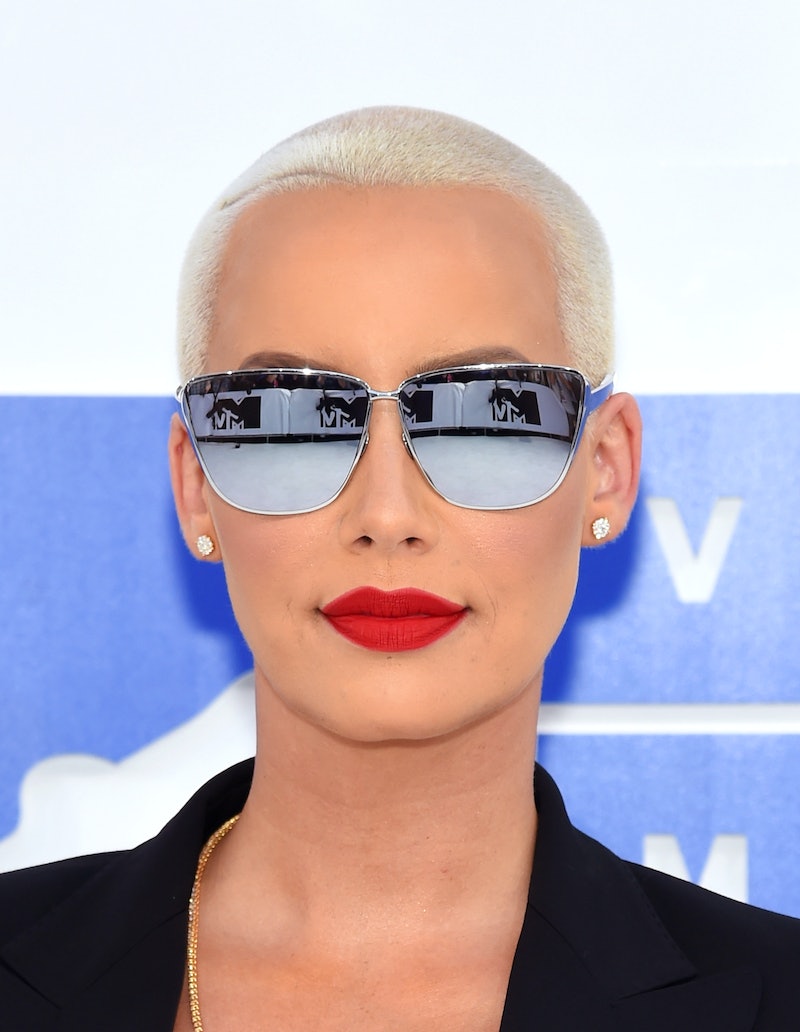 The model, actor, and fashion designer is known as a proponent of "go big or go home" when it comes to her sartorial choices. But Amber Rose at the 2016 MTV Video Music Awards is something else entirely. Personally, I wasn't sure how she'd ever top her Rose McGowan-inspired, barely-there dress of 2014. But then came the anti-slut shaming bodysuit of 2015, along with a squad that was armed and ready to take on issues of women's autonomy and sexuality with total fearlessness.

For the Aug. 28 awards show, Rose didn't walk the carpet in something quite as provocative as a one-piece emblazoned with words like "gold digger" and "bitch," but she did make a striking appearance in a simple blazer, slacks, and Aviator-like shades, all the while rocking the underwear as outerwear trend and repping her absolute queenliness.

Rose's style is a moniker of her boldness, and this simple ensemble is no different. Although far more low-key than what we're used to seeing her in, Rose remains proof that you don't have to "cover up" or go totally out-there to make a statement. Sometimes you can just wear your bra and a men's suit out of the house, and call it a day.

More like this
Everything To Know About Taylor Swift’s 10th Studio Album, 'Midnights'
By Grace Wehniainen and Jake Viswanath
7 ‘Ugly’ Trends Kendall Jenner Makes Look Cool
By Allie Fasanella
These Are Kylie Jenner's Best Paris Fashion Week Looks... So Far
By Dominique Norman
Hailey Bieber Channeled Jackie Kennedy At Paris Fashion Week
By Allie Fasanella
Get Even More From Bustle — Sign Up For The Newsletter