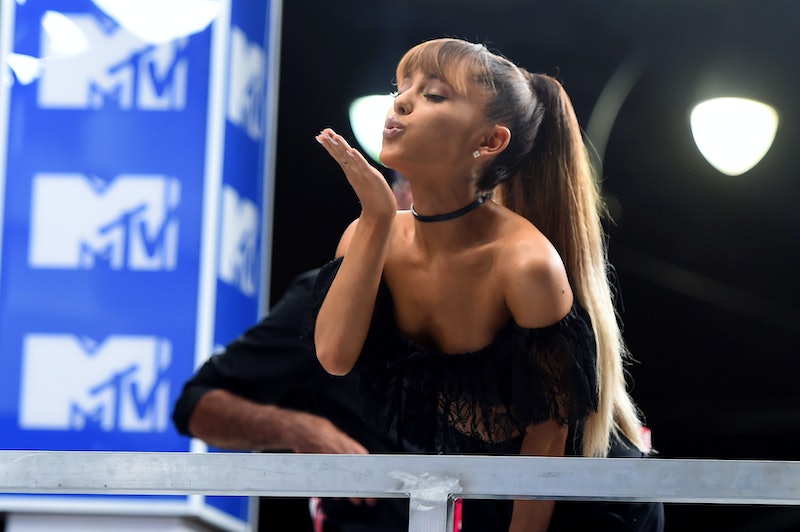 We know. Ariana Grande's ponytail is her signature and it's been full of secrets over the years. The singer has often been criticized for wearing her hair the same way, all of the time. Grande wore her instantly recognizable ponytail to the 2016 VMAs, but with a twist. The singer has switched up various ponytail elements from time to time. Like that time she went platinum blonde or added bangs. However, Ariana Grande's 2016 VMAs ponytail was crimped. Crimping irons leave wavy ridges and bends in the hair, adding texture and dimension. ICYMI, crimped hair was huge in the '80s.

More specifically, Grande's ponytail was crimped, extreme ombre with blonde, dip-dyed ends, and paired with bangs. So it was a lot of look at once, but I loved it.

While Grande rocked a very '80s hair trend, she mixed it with a resurgent '90s accessories trend, as well. She wore a black velvet choker around her neck. With her hair pulled back off her face and neck via her crimped pony, Grande's necklace was super visible, as was her delicate neck tattoo.

I love that Grande mixed two trends that are incredibly decade-specific with her black outfit. Since she was born in 1993, she certainly wasn't around to experience the crimping trend on the first go. But the "Dangerous Woman" brought it back at the 2016 VMAs.

She showed off plenty of her abdomen and her shoulders, as well.

Grande balanced out her skimpy top with wide-legged bottoms. And that pony.

The Ariana Grande ponytail always has a life of its own.

Adding golden ends and crimping took the "usual" ponytail from familiar and predictable to BOOM!