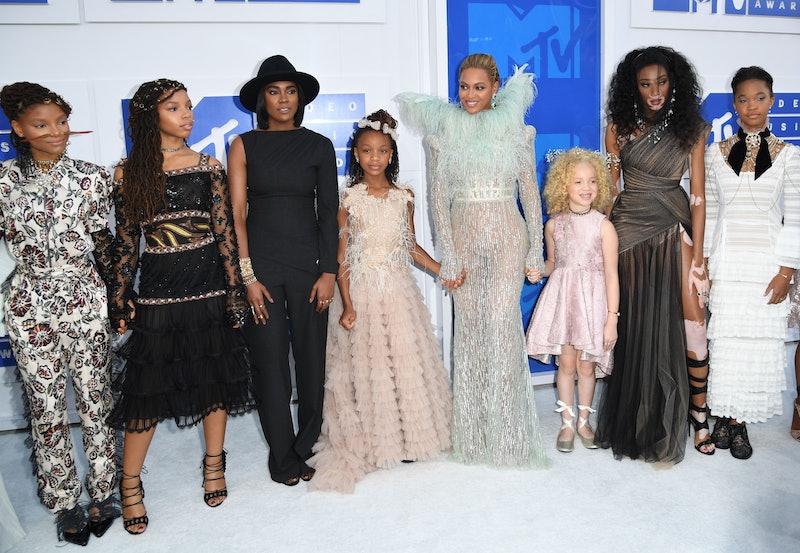 This has been the year of many momentous events: One of the most bizarre presidential elections America has ever seen, the passing of musical legends like David Bowie and Prince, and a radical Beyoncé visual album that touched many a heart and broke many a boundary. The "Formation" dancers at the 2016 VMAs on Aug. 28 are a reminder that Bey and co. are not a passing trend, nor a temporary political fad. The impact of Lemonade and arguably "Formation" in particular has not died out. Her work has been a call to arms for not only women of color, and all POC still marginalized throughout the U.S. and the world at large, but a call to arms for everyone who is watching. We all have a role to play when it comes to championing equality. And Beyoncé and her squad are only getting started.

Beyoncé has a total of 11 nominations for her groundbreaking visual album at the 2016 MTV Video Music Awards. These include Video Of The Year for "Formation," Best Female Video for "Hold Up," and Breakthrough Long Form Video for Lemonade. When it comes to "Formation" and Lemonade — work that aligns with issues as tangibly political, revolutionary, and necessary as the Black Lives Matter movement — it can seem difficult to touch upon the fashion: Like doing so is somehow a disregard for the radicalness of the activism. But much like in the video for "Formation" itself, some of the women accompanying Beyoncé tonight are seemingly sporting overtly political stylings.

Chloe and Halle, in particular — the incredible singers signed to Beyoncé's label — seem to be mixing traditional African accessories, like pendants, with plantation-style dresses. The juxtaposition of the aesthetics feels like a commentary on the Southern Belle, with tiered ruffle-heavy styles of the oppressors (plantation owners) at odds with the culture of the enslaved.

Style played a crucial role in "Formation" and Lemonade's visual statement-making, so it makes perfect sense that we'd see some of the sartorial details utilized for Beyoncé's videos on the red carpet tonight.

There's a reason Beyoncé has 11 nominations on the MTV carpet this year. We can only hope she and her team of radical women and colleagues continue to fight for everything "Formation" has stood for.

More like this
Everything To Know About Taylor Swift’s 10th Studio Album, 'Midnights'
By Grace Wehniainen and Jake Viswanath
Beyoncé’s Special Tribute To Sister Solange Was Both Touching & Hilarious
By Stephanie Topacio Long
Mel C Wants You To Know That Margaret Thatcher Wasn’t A Spice Girl
By Darshita Goyal
Harry Styles’ Red Carpet Looks Have One Thing In Common
By El Hunt
Get Even More From Bustle — Sign Up For The Newsletter