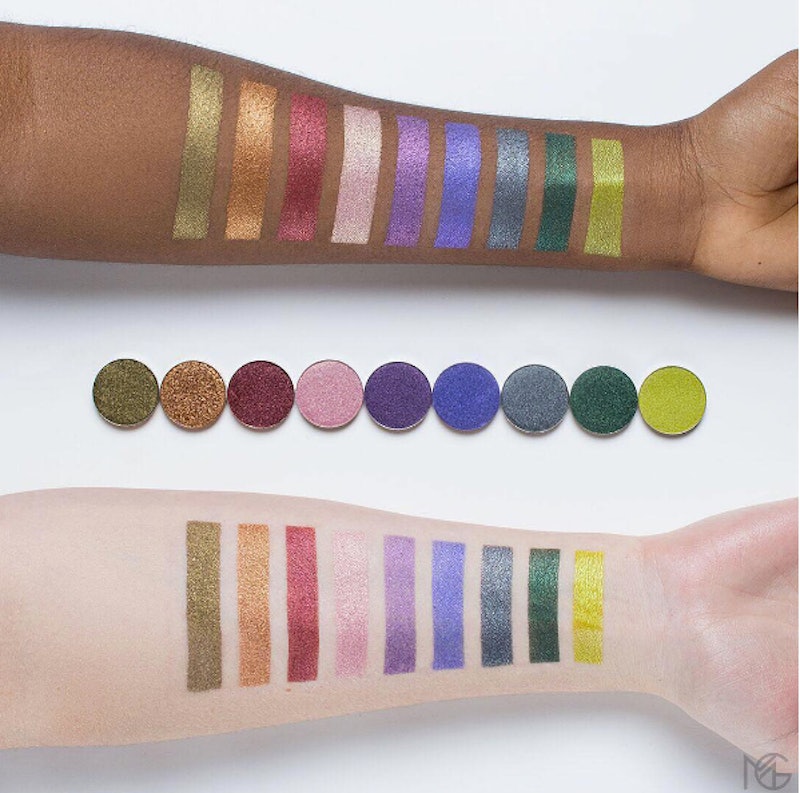 When it comes to bright shadows, there's basically no brand better than Makeup Geek. Their palettes are everything, so when I saw that the cosmetics company would be releasing new Makeup Geek Foiled eyeshadow shades, I had to look for more details. You probably know Makeup Geek from its collaboration with mega-famous YouTube beauty vlogger KathleenLights and the highlighter collaboration she did with them, but the brand is well known for its amazing eyeshadow palettes.

Last month it announced the release of a new neutral eyeshadow palette, and its bright shadow shades have legions of fans. But one thing that Makeup Geek needed to expand upon? Its insanely popular metallic shadow shades, Foiled. Well, the good news is that their new shadow shades are definitely what fans are looking for. They're a rainbow of metallic shadow shades, and you're going to want to check out the pic Makeup Geek released on its Instagram Monday. The shades are super pigmented metallic colors, and they come in nine different bright shades. From the more neutral olive green and copper shades to the brighter violet and chartreuse colors, you can definitely create some fun looks with these shadows. Just check out how great they looked in the Instagram the brand posted Monday.

Makeup Geek is staying pretty mum on the details of the new Foiled shades for now, other than saying they'll be "sharing more details soon." The brand already has 30 Foiled shades, but these new ones look different than the original set or the expanded shades already available from Makeup Geek.

Makeup Geek founder Marlena took to YouTube to announce the new shades, and she said some of them were direct requests from fans who wanted to see certain colors. It's super helpful to see her explanation of each shade as well, and fans are pretty excited.

Although we'll still have to wait for more details on when the shades will be released, we know they're coming soon.