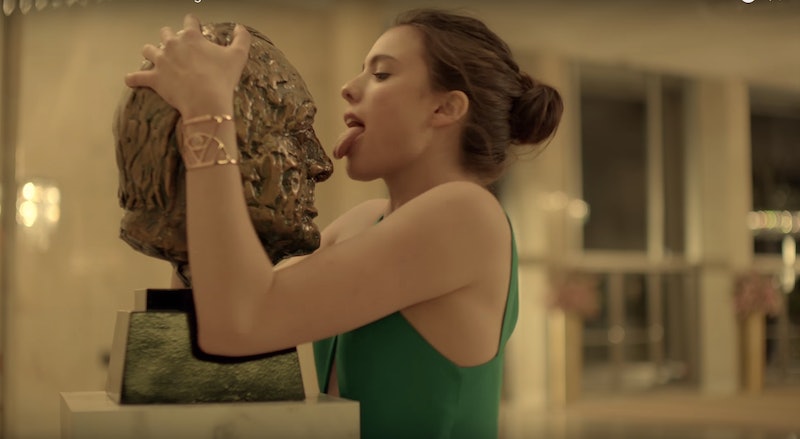 Bizarre perfume commercials are a time-honored tradition. I'm not sure who started the trend, but it goes at least all the way back to the 1960s. Perfume commercials are never straightforward in the way that, say, shampoo or makeup commercials are — and why would they be? Fragrances are almost impossible to describe in a way that consumers will know concretely what they are purchasing, so instead brands focus on creating a certain mood or casting an attractive celebrity and relying on that to sell the perfume. If you're quirky, you buy Prada Candy. If you're sweet and feminine like Natalie Portman, you buy Miss Dior. If you're glamorous like Charlize Theron, you buy Dior J'Adore. Consumers rely on perfume commercials to indicate what sort of person or lifestyle that particular fragrance is for. That makes perfect sense... to a point.

After a while it somehow became the norm for perfume commercials to completely detach themselves from reality (and I'm not even talking about spoof perfume commercials like Bacon By Bacon or Enorme, although those certainly deserve a mention). There's setting a mood and then there's getting carried away. Truth be told, though, our favorite perfume commercials have always been the silly, weird, and downright crazy ones. Inspired by the ad accompanying the launch of the new Kenzo World fragrance (which is, of course, included on this list) we've compiled the top 16 perfume commercials that made us laugh, cover our eyes, and shake our heads in consternation.

Let's ease into this with a fairly normal entry. Of course, only in the world of perfume commercials is it considered "fairly normal" to randomly hack off all your hair and a good portion of your clothing. Possibly because it's Agyness Deyn, your brain just goes "Oh yeah, that looks cool" and leaves it at that.

With this, we've gone from cool to cringe-inducing. It was extremely difficult narrowing down all of Britney's awkward perfume commercials to just one, but this silly fantasy definitely takes the cake — in the best way, of course.

This commercial was directed in the 1990s by none other than David Lynch. Unsurprisingly it has a very creepy Twin Peaks tone.

This Enjoli ad from the '80s tried to convince women that they could do it all — as long as they had this perfume, of course. That must be one energizing scent.

This entire ad is only three minutes long but feels like a feature film. A few notes: I, too, stand around wrapped in a sheet right after I wake up; it's unfair how good Keira Knightly looked in that skin-colored jumpsuit; and how the hell did she get it back on her and then shimmy down the window so fast at the end?

Oh, to be Sophia Loren for a day while she restores an old Italian villa with a crew of hunky men. This commercial definitely leans towards the silly side but everyone seems to be in on the joke so it's cool.

Don't kids these days have anything better to do than hang out in fields and drape themselves over horses while holding ridiculously oversized bottles of perfume?

Your opinion on this commercial will probably largely depend on your opinion of Wes Anderson. If you're a fan, you'll probably love it. If you're not, you may find it unbearably twee and off-kilter. One thing's for sure: Lea Seydoux is perfection in it.

This is pretty much par for the course for Nicki Minaj. Much like the Britney Spears ad, this one is sure to appeal to girls under the age of ten everywhere.

The creepiest part of this commercial is the way they used Marilyn Monroe for it. Let's not start bringing dead celebrities back to life for our goofy perfume commercials, OK?

This 1975 commercial has serious Lolita vibes and yet you can't look away; it's like watching a train-wreck in slow motion. Somebody make that grown woman stop licking that lollipop.

I mean, what else did you expect from a Lady Gaga perfume? We're all probably going to have nightmares. Yep, everything here appears to be in order.

15. Charlotte Tilbury Scent of a Dream

The main ad for Charlotte Tilbury's new fragrance, Scent of a Dream, is fairly typical for perfume ads: It stars Kate Moss wearing a sequined dress, flipping her hair constantly, and literally knocking people off their feet with what must be an overpowering scent. What really makes Scent of a Dream deserve a place on this list, however, is the 360-degree virtual reality video that they made for it (also starring Kate Moss). It's pretty trippy and also a bit goofy — in other words, it's the perfect perfume ad.

And finally, the star of the hour. This video has been making the rounds all week and it's easy to see why. Directed by Spike Jonze and starring the beautiful and talented Margaret Qualley dancing choreography from the person who did Sia's Chandelier choreography, this mini film has a lot of talent in it. Oh, and crazy. Lots of fun-to-watch crazy happening here — and I couldn't be happier about it.

More like this
How To Curl Your Hair With Leggings, According To TikTok
By Carolyn Steber
An Honest Review Of BeautyTok's Beloved Sleepy Tie Hair Tool
By Rebecca Strong
This Week’s New Makeup Releases & More Beauty Headlines
By Audrey Noble and Erin Stovall
15 January 2023 Beauty Launches Our Editors Can't Get Enough Of
By Rachel Lapidos
Get Even More From Bustle — Sign Up For The Newsletter
From hair trends to relationship advice, our daily newsletter has everything you need to sound like a person who’s on TikTok, even if you aren’t.