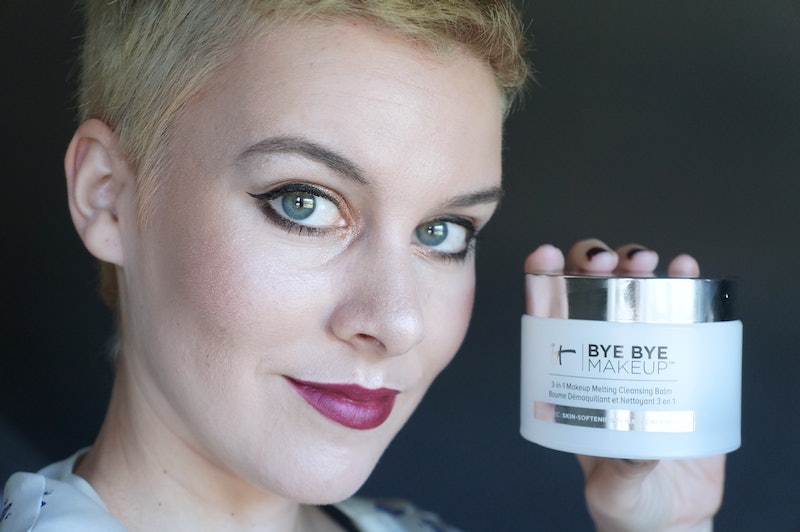 When I'm looking for a makeup remover, ideally I want one that does two things: Removes makeup completely and leaves my skin feeling hydrated rather than stripped and dry. Unfortunately I usually have to compromise for either one or the other. I've tried lots of makeup removers that felt really gentle and hydrating on my skin, but left behind traces of mascara and foundation. On the other hand, I've also tried really effective makeup removers that took off all my makeup easily but left my skin feeling irritated and dried out.

In the past I've compromised by following up a drying makeup remover with heavy moisturizers or by double-cleansing with more than one hydrating (but ineffective) cleanser. But that is no longer the case because I've finally found a do-it-all makeup remover that makes my nighttime routine fast and easy: the IT Cosmetics Bye Bye Makeup 3-in-1 Makeup Melting Cleansing Balm.

This cleansing balm really is a 3-in-1 product as its name promises. It removes makeup, cleanses the skin, and acts as an anti-aging, skin-softening serum. It kind of sounds too good to be true, right? Well, that's what I initially thought which is why I put it to the test.

This cleansing balm contains collagen to boost skin's elasticity, hyaluronic acid for hydration, peptides to fight wrinkles, ceramides to strengthen the outer barrier of your skin, and antioxidants to fight free radicals and help with signs of aging. A quick look at the ingredients list yields shea butter, aloe extract, plant extracts, tea tree leaf oil, colloidal oatmeal, and glycerin. So there's a lot of hydrating, soothing, anti-aging, and naturally-derived ingredients in this.

There's also fragrance, alcohol, mineral oil, and silicones — ingredients that some people don't want in their products. Personally I try to keep clear of products that contain high amounts of alcohol or artificial fragrances because they can be irritants, but since in this case those ingredients are listed at the very bottom of the list (meaning their inclusion is minimal) and my skin doesn't react negatively, I'll allow it. Also, I happen to like the light, citrusy fragrance.

So I liked the overall sound of the ingredient list, but the next question was: Does it work? First I put it to the test by putting some of my longest-lasting waterproof makeup (lipstick, concealer, foundation, pencil eyeliner, liquid eyeliner, and mascara) on my arm.

Then I massaged the cleansing balm onto the swatches for a moment before wiping it off with a cloth. This was the result:

You can still see a faint line where the liquid eyeliner was (Stila Stay All Day Liquid Liner is my favorite because of how stubborn it is) but otherwise it took everything else off easily. I was very impressed.

For comparison, I put the same swatches of makeup products on my other arm and used another random cleanser to remove them.

Here's the result of my control test:

As you can see, the mascara, eyeliner, and liquid lipstick were all really difficult to remove. After that I was doubly impressed by IT Cosmetics' cleansing balm.

Of course, I had to try it out on my face too. Even if it's great at removing makeup, that doesn't mean much if it irritates my sensitive facial skin or leaves it feeling dry or greasy. The next time I had to remove a full face of makeup (we're talking foundation, concealer, bronzer, blush, highlighter, lipstick, eyeliner, mascara, eye shadow — the works) I did a similar test.

I used a makeup removing wipe for one side of my face (my usual go-to when I get home late at night and have to remove makeup before bed) and the cleansing balm on the other side.

Below is my face after using the cleansing balm on the left side, with the right side still demonstrating how much makeup I had been wearing:

Again, I was impressed by how quickly and easily the balm removed my makeup. (A note: my bare skin is always that red from rosacea; it's not from the makeup remover.)

Then I used the makeup removing wipe on the other side of my face. Below, you can see that the wipe (the right side) left behind more eye makeup than the balm (the left side):

The wipe (the right side) also left behind more lipstick than the balm (the left side):

I also had to go over my skin multiple times with the wipe to feel like I had removed all of my makeup, and that felt very rough on my skin. The balm is nice because it feels very gentle, as it literally melts away the makeup. It didn't leave my skin feeling dry or greasy afterwards either.

The only thing I don't like about this cleansing balm is the packaging. I understand why it's in a jar (it's very thick) but I don't like how greasy and messy the jar's lid gets after using it. More importantly, if you're not careful you can easily get bacteria and makeup inside the jar. I always wash my hands before using it and am careful not to stick my hand in the jar twice while removing makeup (I made that mistake once and ended up getting some foundation in the product).

What I do like about this cleansing balm is that it has skincare benefits in addition to its makeup-removing abilities. You can leave it on for ten minutes, like a face mask, before removing it to maximize the skin benefits. Then you can either wash it off or simply wipe it off with a cloth. Afterwards, my skin feels softer and more hydrated in addition to being thoroughly cleansed.

IT Cosmetics' cleansing balm makes my nighttime routine so much faster and simpler because instead of using a makeup removing wipe, double-cleansing, moisturizing, and using a face mask, this one product does it all. Two thumbs up from this lazy girl.

More like this
The Case For Using Your Fanciest Beauty Products Every Single Day
By Carolyn Steber
Caliray's New Surfproof Setting Spray Is The Ultimate Skin Refresher
By Olivia Rose Rushing
The 13 Best Skin Tints For That Dewy, “Your Skin But Better” Glow
By Olivia Rose Rushing
The 13 Best Cream Makeup Palettes, According To Experts
By Audrey Noble
Get Even More From Bustle — Sign Up For The Newsletter
From hair trends to relationship advice, our daily newsletter has everything you need to sound like a person who’s on TikTok, even if you aren’t.