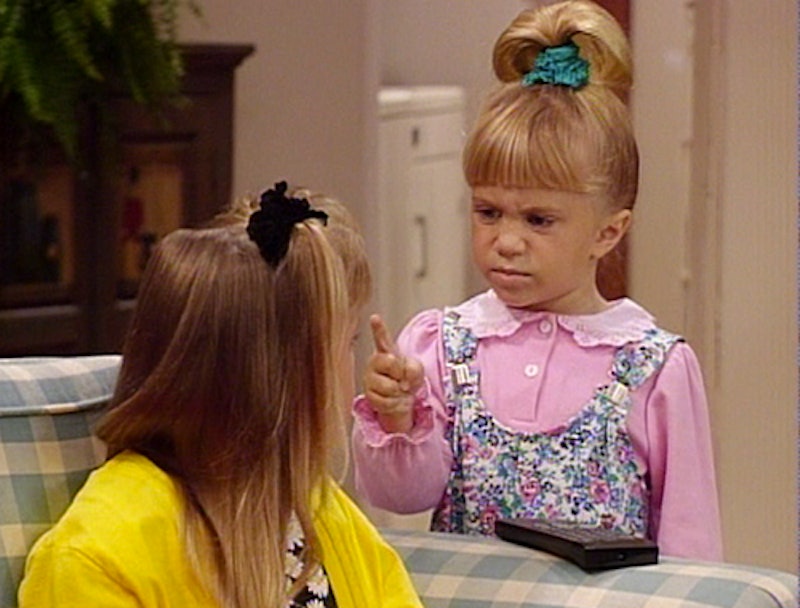 Once upon a time, an innocent soul Google searched "the dangers of glitter" and lived the opposite of a happily-ever-after. That unfortunate individual is me: A typical millennial with a severe case of nostalgia — specifically, a deep longing for '90s beauty trends, and my personal favorite, roll-on body glitter. However, was I aware that a speck of glitter could cost you an eye? (Warning: That link is not for the faint-hearted) Though the world is prone to romanticizing the past, it often glosses over the stark reality. From crimping to cornrows, there were actually a few '90 beauty habits that were bad for your health. Ignorance is no longer bliss, friends.

Religiously crimping your tresses every night may have been the norm in 1996, but in 2016, it is a different story. Decades later, you'll realize the true aftermath of your '90s beauty habits. Everything was harmless on the surface back then — I mean, if the Tanner sisters did scrunchies, that deemed it automatically acceptable, right?

At the end of the day, most of us fall trap into the age-old excuse of "I just didn't know better" — that is, until now. Before you decide to fully commit to a '90s throwback, pause and consider the health consequences. What was A-OK decades ago is not always the same today. And yes, I do apologize in advance for shattering any childhoods. Everyone has to grow up... eventually.

Before the dawn of the modern day mermaid waves, there was crimped hair — the preferred 'do of the '90s cool girl, among other things. Maybe every weekday morning ritual was the same: posted in front of your bathroom mirror, religiously crimping your tresses to perfection, perhaps belting out a Britney tune or two. While the end product was magazine cover-worthy, the impact in the long run is not. As you've likely heard by now, excessive heat exposure from hair tools dehydrates hair and makes it more prone to breakage and dullness.

But fear not — you can still savor your precious ringlets via no-heat curls and nourishing hair treatments.

Now, what would Queen Cara Delevingne think of this beauty blunder? The '90s were a time of overplucked brows — in fact, the thinner, the more non-existent, the better. From Jessica Alba to Christina Aguilera, sparse arches were favored over the bold and defined alternative that is trending today. Beware though — getting too tweezer-happy has its permanent downfalls.

In an article for the The New York Times, dermatologist Dr. Audrey Kunin notes that once hair follicles are dead, they will not grow back. And the fastest way to kill those hair follicles? Intense tweezing, in addition to constant threading and waxing. If you want to restore your over plucked bits, there are procedures like microblading that can give you a semi-permanent illusion of bushy brows.

I'm not talking about a simple, one-note hair job — I'm talking about highlights taken to the extreme. Remember when chunky highlights haunted every high school hallway and hair salon? You can blame that partly on celebs who were the pinnacle of '90s essence: Jennifer Aniston, Kelly Clarkson, and Ginger Spice to name a few. Let's be real here: even the name chunky highlights sounds like a crime in itself (though "skunk highlights" is perhaps passable).

Though patchy colored streaks were all the rage back in the day, it did more damage than dazzling. According to Philip Kingsley, highlighted and bleached hair removes color through oxidation, which in turn can cause hair to become inelastic, dry, and brittle over time. Suddenly your natural tresses aren't looking so bad, huh?

The '90s were defined by infinite tubes of roll-on body glitter, glitter eyeshadows, glitter nail polish — the whole iridescent package. However, despite the many love affairs with shimmer and shine, there is a darker truth. Maya Allen of Cosmopolitan admitted she never would have considered glitter to be a deadly weapon, and I was 100 percent with her until I too discovered the real life American horror story: a woman lost her eye after a speck of glitter cut into her cornea and caused an infection. Yeesh.

Yes, we were busy dousing every inch of flesh and bone in glitter back in the '90s, but be relieved that you never had your precious sparkles betray you. Clearly, not all that glitters is gold.

The scrunchie — beloved wrist companion and choice hair accessory of the everyday '90s gal. Yet, beneath the seemingly harmless velvety goodness, is a case of potential hair damage. As British celebrity hairstylist Mark Hill told StyleCaster, tight updos that pull hair from the face can gradually strain finer strands and eventually thin and weaken the hair, especially if you don't give your tresses a break from all the ponytail action.

Guilty of the scrunchie crime? You're not alone. Time to cut back on the aerobic class vibes and let your locks fly au naturel.

Mascara for lashes are too normal, and therefore, very un-'90s. If chunky highlights or cornrows weren't your forte, then perhaps hair mascara was your go-to hair gaffe of the past (admit it: everyone had one). Luckily, hair mascara was the best of the both worlds because not only could you create the neon pink strands of your dreams, but the temporary color aspect meant it passed the parental unit test.

As always, there's a catch. The beauty of hair mascara was that through one shower session, any traces of that (regrettable) electric blue could disappear down the drain — but tread lightly, because over-washing your hair is an absolute no-go. As StyleCaster reported, lathering up daily can dry out your hair, discarding natural proteins and oils that is needed to keep tresses healthy. However, skip the rinse too often and your hair can become a crusty colored nightmare. As for me, I'm thankful it is now 2016 and the hair mascara trend has since been banished from the beauty realm.

More like this
The Best Beauty Looks Spotted At Paris Couture Week 2023
By Audrey Noble
11 Stunning Critics' Choice Awards Beauty Moments
By Audrey Noble
6 Asian Beauty Rituals That Will Soothe Your Skin, Scalp & Mind
By Jennifer Li
9 Valentine's Day Hairstyles For 2023 That Look So Dreamy
By Audrey Noble
Get Even More From Bustle — Sign Up For The Newsletter
From hair trends to relationship advice, our daily newsletter has everything you need to sound like a person who’s on TikTok, even if you aren’t.