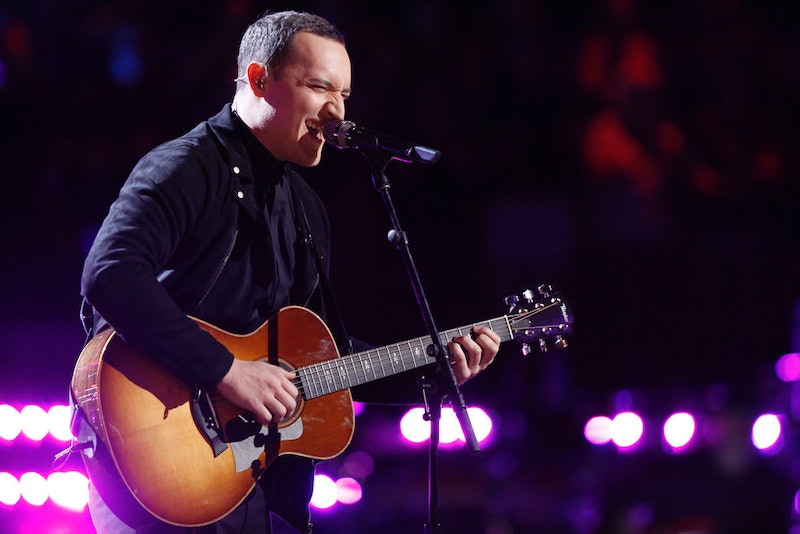 And then there were eleven. The Voice Top 12 Results Show ended in heartbreak for one contestant, but in victory for another. After ten of their fellow contestants were saved by America, Team Alicia's SaRayah and Team Miley's Aaron Gibson were left to sing for their lives in the Instant Save. While both brought their best, only one could win—and he did so by a landslide. Gibson wowed voters with a unique rendition of Ed Sheeran's "Lego House" and was rewarded with nearly seventy percent of the Instant Save votes on Twitter. Did this moving performance convert skeptics into dedicated Gibson fans? Well, if the numbers could talk they'd say "absolutely."

What's not to love about Gibson? He's got a sexy, gravelly voice, boyish good looks and a charming personality. The Team Miley singer has been one of my personal favorites since the beginning, but clearly it took some convincing to get America on his side. But after his Tuesday night performance—which could be considered his greatest The Voice performance to date—it seems that they finally see what I see. And thank goodness they do because Gibson is truly a talented artist who deserves to be in this competition.

It's no secret that this season of The Voice is jam-packed with talent, but Gibson deserves to be right up there with the best of them. His voice is a little more mainstream than some of his competitors, but that doesn't make him any less talented. If anything, it makes him more deserving to compete. Gibson has a sound that America craves. It's modern, versatile, and a bit mysterious. He's the full package and, now that he has advanced to the Top 11, Gibson will have the chance to prove that to both the coaches and the fans at home.

More like this
5 Wild Theories About Miley Cyrus’ “Flowers” Music Video
By Jake Viswanath
Twitter Is Roasting Liam Hemsworth Thanks To Miley Cyrus' New Song “Flowers”
By Jake Viswanath
'Breaking Bad' Duo Walt & Jesse Are Back — In This Super Bowl Commercial
By Jake Viswanath
'Love Island's Aaron Waters Is Determined To Do This One Thing In The Villa
By Sophie McEvoy
Get Even More From Bustle — Sign Up For The Newsletter
From hair trends to relationship advice, our daily newsletter has everything you need to sound like a person who’s on TikTok, even if you aren’t.