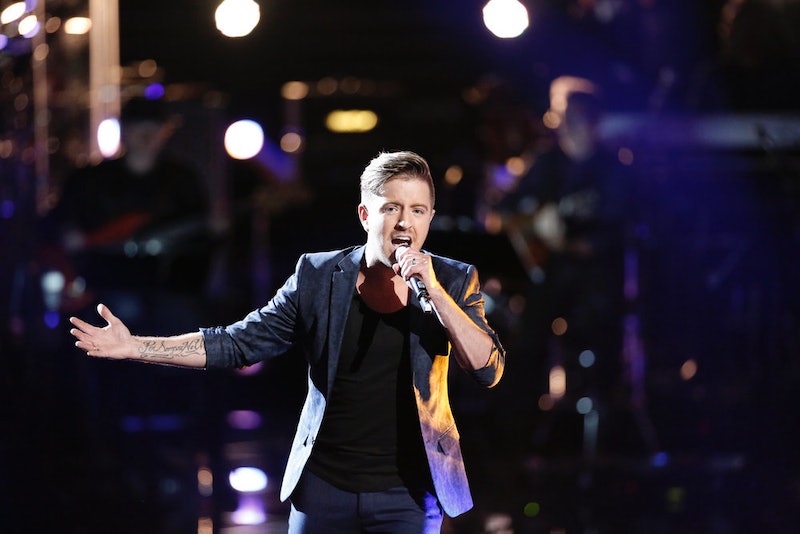 He's in a league of his own. The Voice 's Billy Gilman was in tears as he sang Adele's "All I Ask" in the Top 11—and I was in tears right along with him. Gilman has earned a reputation as being the frontrunner in the Season 11 competition and tonight he did not disappoint. The Team Adam singer opened up in his performance in a way he hasn't before. He let his emotions come through the lyrics, which made the performance so much better. By allowing himself to feel the words he was singing, Gilman brought his performance to a whole new level—a level that is matched by very few not just in the competition, but in the music industry as a whole.

Though Gilman would've been amazing regardless, he had a leg up with this song. This is not the first time the child star has sung "All I Ask" on The Voice—it's just the first time America has heard him sing it. "All I Ask" was, in fact, Gilman's The Voice audition song. No, not his Blind Audition song—his audition song to get on the Blind Auditions. The fact that this song brought Gilman to The Voice makes it even more special. The Team Adam may not have been able to open up the way he did if the song wasn't so important to him. But because he was familiar with the song he was able to dive into the emotion even more than he would've if he was learning a new song. Gilman's personal connection to the song gave him a major advantage—and it's certainly going to pay off.

With only three weeks left in the competition, Gilman has nowhere to go but up. At this point, there's not much he can do to lose his lead. He's just that good. The only way he could lose America's votes would be if he went onstage and didn't even sing at all—and even that might not do it. Gilman is untouchable and, if all goes as it has been, there's no way he won't be crowned The Voice Season 11 winner come the finale.

More like this
Andy Cohen Apologized To Larsa Pippen After A 'RHOM' Season 5 Reunion Dust-Up
By Brad Witter
RHOP’s Robyn Dixon Explained Why Juan Paid For Another Woman's Hotel Room
By Brad Witter
Kaitlyn Bristowe Said Chris Harrison Ignored Her After Her 'Bachelorette' Hosting Gig
By Grace Wehniainen
Everything To Know About 'RHONY' Season 14
By Jake Viswanath, Alyssa Lapid and Brad Witter
Get Even More From Bustle — Sign Up For The Newsletter
From hair trends to relationship advice, our daily newsletter has everything you need to sound like a person who’s on TikTok, even if you aren’t.