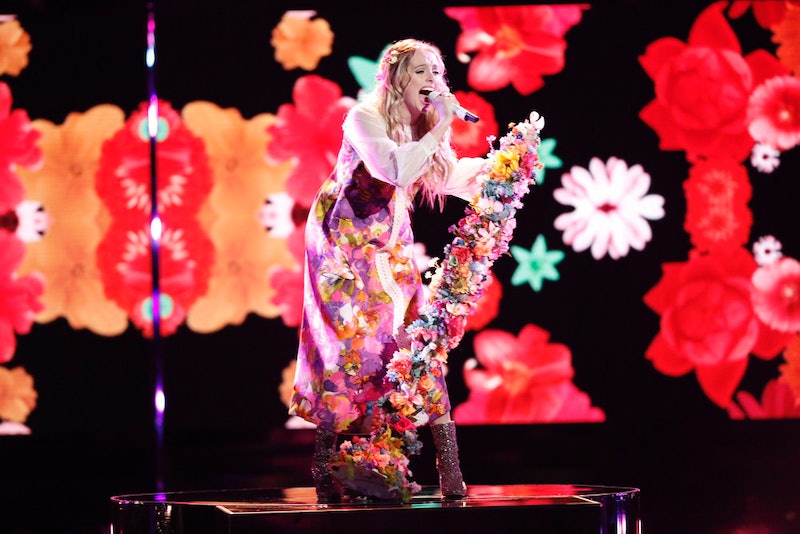 Don't try to change her in any way, because she's perfect. Darby Anne Walker performed "You Don't Own Me" in The Voice Top 11 and proved that she's not going anywhere. The Team Miley artist's performance was packed with power and personality. Everything about her performance oozed Darby—it was original, fun, colorful, and all-around awesome. Very few artists bring the originality like Walker does. One artist that does, though, is Miley Cyrus, who just so happens to be Walker's The Voice coach. Cyrus has taught Walker to truly own everything that she is and to take it even further. It's crazy to think that Walker would not have had such a perfect mentor if she had auditioned for any other season of the show. Cyrus and Walker are a match made in heaven and the two have a real shot at going all the way to the finale together.

Never in the history of The Voice have we seen an artist as truly original as Walker. Her personality is truly and one-hundred percent her own—and she is completely unapologetic about it. Walker oozes rainbows and glitter and boasts a voice that fits into no one box. It's crazy to think that if she had been on any other season of The Voice she may not have been encouraged to embrace her unique style in the same way. She was made to work with Cyrus. Cyrus has truly taken Walker under her wing and taught her to embrace her full self. Walker knew who she was well before she stepped on to The Voice stage, but Cyrus has helped her find herself as an artist even more. The 17-year-old has grown immensely since joining Team Miley, but she still has room to grow.

As this is Cyrus's first season on The Voice, it's exciting to watch her mentor her artists. She seems to have taken the most maternal approach of any of her fellow coaches. In addition to just coaching her artists, she befriends them to really learn who they are. This helps her help them dig deep into themselves to find who they really are. As an original herself, Cyrus has been able to teach her team of artists to embrace what makes them truly original. This shines the most through Walker, which is why the two have the best chance of going to the finale together. Walker still has so much to learn from Cyrus. As she continues learning, she'll become a true force in this industry. Whether she wins the competition or not, Walker is bound to make waves in the music industry—and she has Coach Miley to thank for getting her there.

More like this
5 Wild Theories About Miley Cyrus’ “Flowers” Music Video
By Jake Viswanath
Grammys Host Trevor Noah Made Adele's Dream Of Meeting The Rock Come True
By Brad Witter
Linda Ronstadt’s “Long Long Time” Plays A Pivotal Role In The Last Of Us
By Brad Witter
Taylor Swift Visited The 'Glee' Set For This Bizarre Season 5 Episode
By Grace Wehniainen
Get Even More From Bustle — Sign Up For The Newsletter
From hair trends to relationship advice, our daily newsletter has everything you need to sound like a person who’s on TikTok, even if you aren’t.