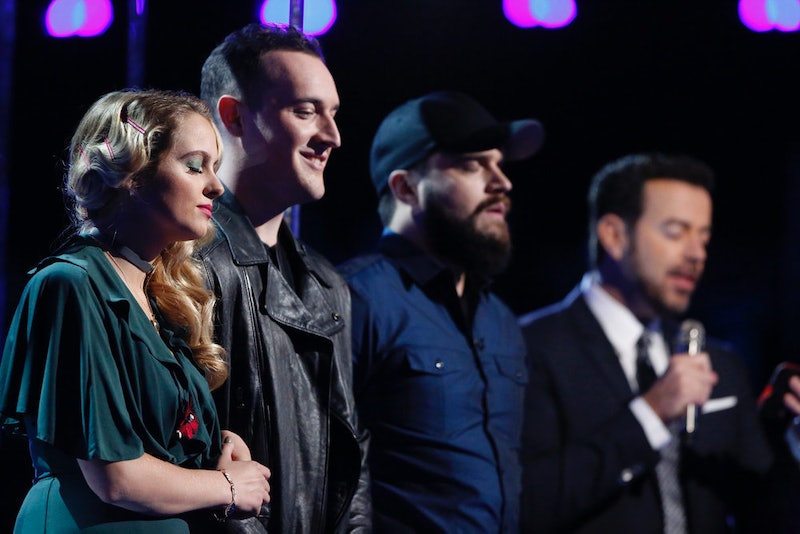 If you thought the Knockout Rounds were over, you were wrong. Team Miley artists Darby Anne Walker and Aaron Gibson were forced to go head to head for the final spot in The Voice Top 10. The two unfortunately landed themselves in the bottom after Monday's Top 11 competition, putting Miley in a tough position as two of her three contestants battled it out to stay in the competition. Though both showed off their best, Gibson won America's vote by a landslide to earn himself a spot in the Top 10. And with his second Instant Save win, Gibson proved that he's officially Season 11's underdog.

Not going to lie, I was shocked that Walker was sent home. Not only was she Miley's favorite, she was one of my favorites, too. Walker oozed personality and originality, making her one of the most unique contestants in The Voice history. Her quirkiness was needed on The Voice and in the music industry, and it's a true disappointment that she was sent home. Not to discredit Gibson—he is extremely talented and is clearly favored by America. Of the two Instant Saves of Season 11, Gibson has sung his way out of both. There's something about him that America loves, which is why they keep saving him week after week.

The question now is...how long can Gibson continue like this? He's clearly not America's favorite, just their favorite when forced to choose. But now that Walker is out of the picture, Miley will focus more on both of her artists, including Gibson. This means that he'll have the chance to develop his voice even more than before. It's possible that the continued training will help him win over America even more, but it's also possible that his luck is about to burn out. With only three weeks left in the competition, stakes are high. Only the best of the best will continue on and, if history repeats itself, Gibson will not be part of that group. Time will tell, but The Voice odds don't seem to be in Gibson's favor.

More like this
5 Wild Theories About Miley Cyrus’ “Flowers” Music Video
By Jake Viswanath
Rachel Fuda Gave Birth Just Weeks Before 'RHONJ' Season 13
By Brad Witter
Danielle Cabral From 'RHONJ' Is No Stranger To Reality TV
By Brad Witter
Vanderump Rules’ James Kennedy Already Called His Girlfriend Ally “The One”
By Brad Witter
Get Even More From Bustle — Sign Up For The Newsletter
From hair trends to relationship advice, our daily newsletter has everything you need to sound like a person who’s on TikTok, even if you aren’t.