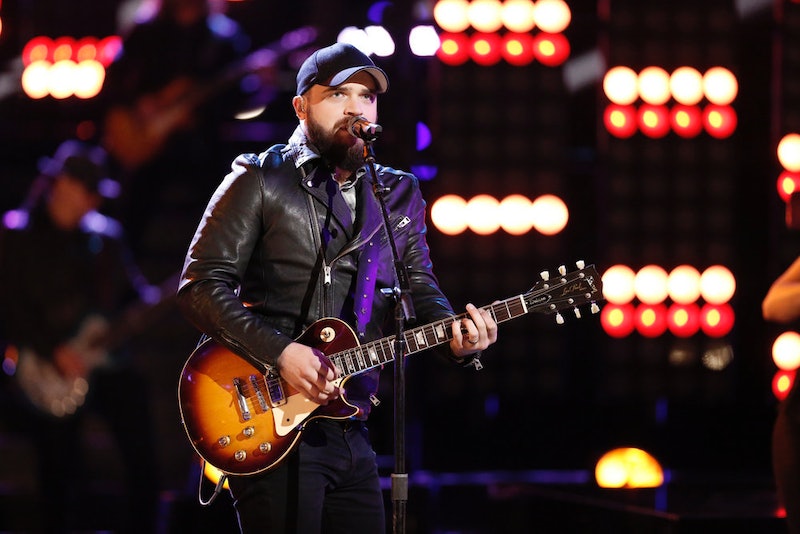 America, he's a real good man. The Voice 's Josh Gallagher took the stage Monday with Tim McGraw's "Real Good Man" and gave his best performance of the season. With every note he sang, Gallagher proved exactly why he's made it all the way to the Top 10. He packs a punch with every performance he gives and that was never more true than tonight—his vocals were on point and his performance was an all-around good time. From his stage presence to his vocal talent to his personality, Gallagher is the full package. With his country prowess and coach Adam Levine on his side, Gallagher has a real chance at making it all the way to The Voice Season 11 Finale.

As Team Adam's sole country artist, Gallagher has proven himself to be a true asset. Not only can he sing beautifully, but the man knows how to put on a show. As a musician and aspiring country artist, this is an extremely valuable skill to have. I can't even begin to count how many times I've watched an incredibly talented vocalist who doesn't know how to work a stage. There are quite a few of these artists on The Voice, but Gallagher is not one of them. The Team Adam artist performs at the level as some of the top country artists. He truly has what it takes to rock a stage at the CMAs or even the Grammys, which is why he'll stick around the competition until the end.

It's no secret that The Voice fans love country artists—they've helped choose them as winners for three out of the past ten seasons of the show. This gives Gallagher a major advantage as one of the three remaining country artists left on this season, though he doesn't necessarily need the help. With Adam as his coach, Gallagher has risen to the top of the pack all on his own. America's support will definitely pay off, though, once Gallagher earns his ticket into The Voice Season 11 Finale.

More like this
Noel Gallagher Joined The Nepo Baby Convo
By Darshita Goyal
'Bachelor' Star Cassie Randolph’s Sister Is In The 'Yellowstone' Spinoff '1923'
By Grace Wehniainen
This Pre-'Love Island' Video Of Olivia & Zara Together Changes Everything
By Bustle UK
Linda Ronstadt’s “Long Long Time” Plays A Pivotal Role In The Last Of Us
By Brad Witter
Get Even More From Bustle — Sign Up For The Newsletter
From hair trends to relationship advice, our daily newsletter has everything you need to sound like a person who’s on TikTok, even if you aren’t.