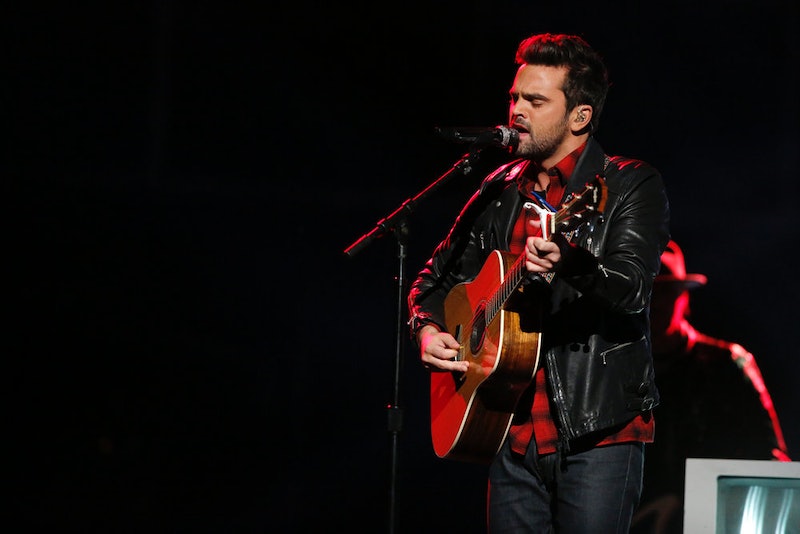 We finally saw his true colors. The Voice 's Brendan Fletcher captivated America with a moving performance of "True Colors" in the Top 10 and earned himself the title of best performance of the night. In all honesty, Fletcher wasn't on my radar before, but he is now. His Top 10 performance was not only the best of the night, but one of the best of the season so far. By immersing himself in the lyrics and emoting throughout, Fletcher was able to move the audience unlike anyone else this season. He quickly sang his way to the top of the pack, and there's no doubt he'll stay there long enough to earn a coveted spot in The Voice Season 11 Finale.

There's a lot of great talent on this season of The Voice and, as of tonight, Fletcher has proven that he's among that talent. The Team Adam contestant won over the audience with his raw, thoughtful performance. In a competition where everyone tries to outdo the other, it's refreshing to see an artist slow things up and break them down all the way to the core. Never has "True Colors" been sung how it was on Monday. Even the coaches admitted that Fletcher's was their favorite version of the song. If he can earn this sort of praise by some of the biggest names in the industry, there's no doubt viewers all across the country are thinking the same thing.

If you asked me last week who would be in the Final Four, Fletcher's name would not have been on the list. But if you ask me now, I would tell you he will absolutely be one of the artists competing in the finale. Coach Adam has helped Fletcher find his confidence and true sound as an artist and, because of that, there's no question the Brooklyn artist will be one of the last ones standing come the finale.

More like this
Paris Hilton & Carter Reum’s Relationship Timeline Includes A 2023 Grammys Date Night
By Bustle Editors
'Bachelorette' Vet Clare Crawley Revealed Her Stunning Wedding Photos
By Stephanie Topacio Long
Rachel Responded To 'Bachelor' Fan Theories About Her TikTok With Clayton
By Grace Wehniainen
Erika Jayne's Estranged Husband Tom Girardi Has Been Indicted On Fraud Charges
By Jake Viswanath
Get Even More From Bustle — Sign Up For The Newsletter
From hair trends to relationship advice, our daily newsletter has everything you need to sound like a person who’s on TikTok, even if you aren’t.