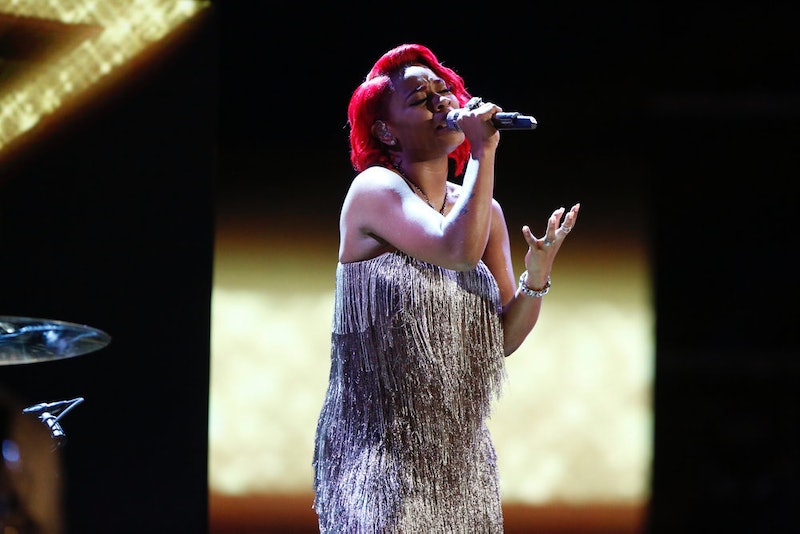 Team Miley can't live without her. Ali Caldwell rocked The Voice Top 10 stage with a powerful rendition of "Without You" and blew the coaches away. Seriously, this woman's voice can't get any bigger. Caldwell left it all on the stage in hopes of advancing into the Top 8 and there's no doubt her hopes will be fulfilled. As one of of only two artists left on Team Miley, Caldwell held it together for the whole team in the Top 10 and gave Coach Miley the performance she needed to stay in the game another week.

Caldwell never fails to disappoint and tonight was no exception. Her dramatic train (seriously, how long was that thing?!) matched her dramatic vocals. Her voice, stage presence, dress, and stage effects all came together to form the perfect performance package. Once again, Caldwell proved that she has what it takes to win The Voice title and, after tonight, she's certainly one step closer.

It's not often that The Voice contestants earn a standing ovation from all four coaches, but Caldwell seems to do so almost on a weekly basis. With only two weeks left in the competition, it seems very likely that Caldwell will make it to the end. And if the voters at home love her as much as the coaches seem to, then it's even more likely that Caldwell could reign victorious in the season finale. Only time will tell, but the odds seem to be in Caldwell's favor for a spot in The Voice Season 11 Final Four.

More like this
5 Wild Theories About Miley Cyrus’ “Flowers” Music Video
By Jake Viswanath
All The Ways You Can Watch The Super Bowl In The UK
By Asyia Iftikhar and Darshita Goyal
The 2023 Super Bowl Commercials Feature A 'Breaking Bad' Reunion & Missy Elliott
By Alyssa Lapid
Twitter Is Shook As Tom Brady Holds Back Tears Announcing His 2nd Retirement
By Marina Watts
Get Even More From Bustle — Sign Up For The Newsletter
From hair trends to relationship advice, our daily newsletter has everything you need to sound like a person who’s on TikTok, even if you aren’t.