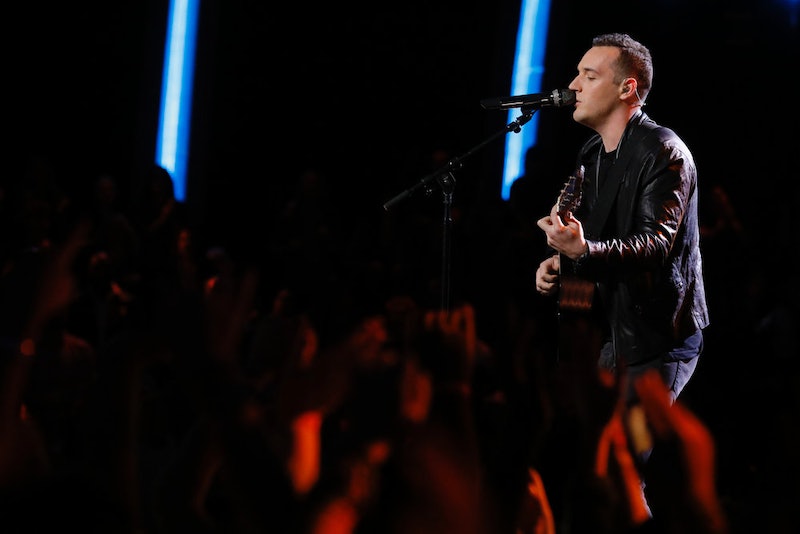 And then there were eight. Three The Voice artists were forced to sing for their lives and a spot in the Top 8 on Tuesday night, and the competition was certainly fierce. Team Blake's Austin Allsup and Courtney Harrell were up against two-time Instant Save winner, Team Miley's Aaron Gibson. Though all three brought their best, only one could reign victorious. And for the third time in a row, Gibson won America's vote and secured the title of The Voice Season 11's comeback kid.

It's not often that a The Voice contestant survives the Instant Save more than once, but Gibson has proven time and again that winning the Instant Save is no sweat. One has to wonder, though, if America loves him so much to keep saving him, why does he land in the bottom week after week? There's no question that Gibson is talented. His Top 10 performance of "Rocket Man" was one of his best of the season so far. Though he continues to receive high praise from the coaches, it could just be that his competition is too tough to crack.

Season 11 of The Voice could be the most talented season so far. Artists like Billy Gilman, W é McDonald, Ali Caldwell, and Sundance Head blow the audience away week after week with showstopping performances. While Gibson gives great performances as well, they're just not on the same level as his competition. He may have had what it takes to make it this far in this game, but his luck is bound to run out in the Top 8. Next Tuesday, the contestant pool will be cut in half, from eight to four, in one night and it seems very unlikely that Gibson will survive. He shouldn't go out with his head down, though. Gibson has achieved a feat that very few have and that is something for him to be extremely proud of.

More like this
'Breaking Bad' Duo Walt & Jesse Are Back — In This Super Bowl Commercial
By Jake Viswanath
'Love Island's Aaron Waters Is Determined To Do This One Thing In The Villa
By Sophie McEvoy
Adam Levine & Behati Prinsloo Welcome Their Third Child Together
By Jake Viswanath
Twitter Is Shook As Tom Brady Holds Back Tears Announcing His 2nd Retirement
By Marina Watts
Get Even More From Bustle — Sign Up For The Newsletter
From hair trends to relationship advice, our daily newsletter has everything you need to sound like a person who’s on TikTok, even if you aren’t.