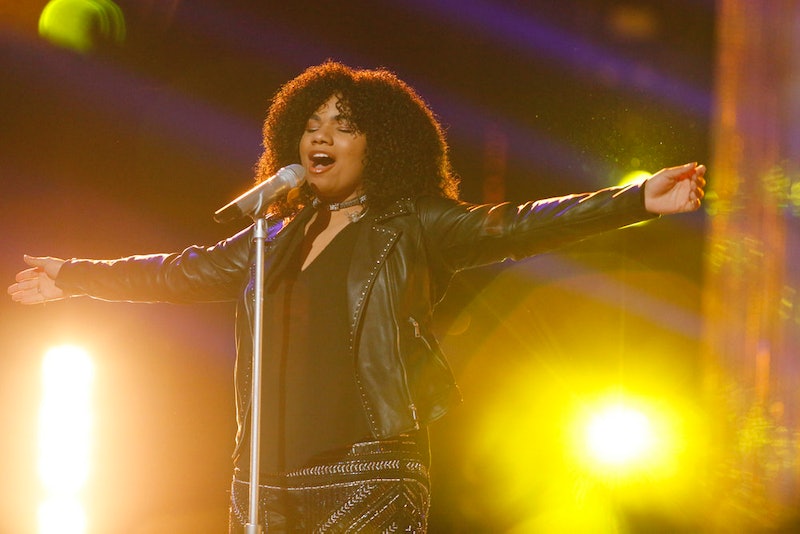 A beautiful message from a beautiful artist. W é McDonald performed Alessia Cara's "Scars To Your Beautiful" in The Voice Semi-Finals and her song choice was so important. As someone who has struggled with bullying, McDonald really felt close to this specific song. It had gotten her through some tough times and, by singing it on one of the biggest stages in the country, she sent a message to bullies everywhere. At this point in the game, McDonald could have sung any song out there. But by choosing this specific anthem, the 17-year-old really showed what kind of music we would get from her own album.

McDonald has been a force ever since her Blind Audition. The difference between her speaking voice and singing voice has shocked fans everywhere. Because of it, she is one of the most talked about artists of the season. But not only is her voice shocking, it's unbelievable. At only 17, McDonald's talent is leagues ahead of professionals twice her age. Her sound bears resemblance to some of the greatest female voices of all time. But her incredible sound is not the only special part about her. McDonald is using her platform to shed light on important issues, much like her coach Alicia Keys. There's no doubt any song she produces would carry with them important messages. She is a legend in the making, which is why her spot in The Voice finale is practically guaranteed.

McDonald has a very, very good shot at winning The Voice Season 11. Both her over-the-top vocals and charming personality have won over the hearts of fans everywhere. But even if she doesn't take the title, McDonald has a very fruitful music career ahead of her. With Alicia Keys as a mentor, doors are bound to open for the young artist. The Voice is just the beginning of the 17-year-old's long journey and I, for one, can't wait to be along for the ride.

More like this
Rachel Fuda Gave Birth Just Weeks Before 'RHONJ' Season 13
By Brad Witter
Danielle Cabral From 'RHONJ' Is No Stranger To Reality TV
By Brad Witter
Paris Hilton & Carter Reum’s Relationship Timeline Includes A 2023 Grammys Date Night
By Bustle Editors
'Bachelorette' Vet Clare Crawley Revealed Her Stunning Wedding Photos
By Stephanie Topacio Long
Get Even More From Bustle — Sign Up For The Newsletter
From hair trends to relationship advice, our daily newsletter has everything you need to sound like a person who’s on TikTok, even if you aren’t.