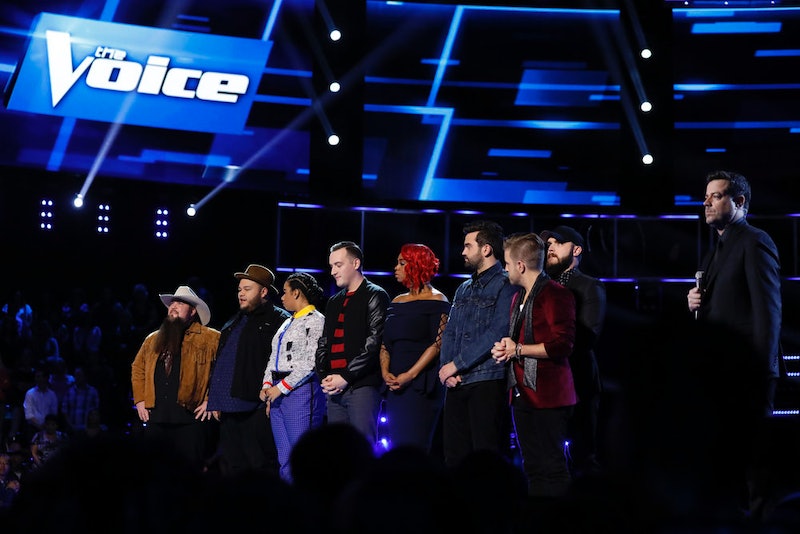 And then there were four. The Voice contestant pool was cut in half on Tuesday night from eight to four. Many talented folks were unfortunately eliminated, but four advanced into the last phase of the competition. The Final Four artists who will compete in the finale are Billy Gilman, Sundance Head, Wé McDonald, and Josh Gallagher. While all four of these artists certainly deserve their finalist status, something glaring is missing from the finale lineup. Thanks to Ali Caldwell's elimination in the final Instant Save, Team Miley will not be represented in The Voice Season 11 Finale.

Though there have been some major finale surprises in the past, this season bore only one—Team Miley's elimination. Though Caldwell has what it takes to be a finalist, she was forced to sing for her life in the final Instant Save against Gallagher and Cristian Cuevas. Unfortunately, she lost to Team Adam's charming country crooner, Josh Gallagher. Though he was deserving of the win, so was Caldwell. If only the Final Four had been the Final Five, she would have made it no sweat. But that wasn't the case and both Caldwell and Team Miley were eliminated from competition.

Though it's devastating that neither Caldwell nor Team Miley will compete in the finale, the loss proves just how talented the Final Four group really is. Gilman, McDonald, Head, and Gallagher are an extremely talented, diverse group. Their artistry spans the spectrum of many genres, including country, pop, and R&B. America is clearly craving each of their individual sounds, which is why they have come this far. Though all of their The Voice careers will end next week, their music careers are just beginning. Win or lose, all four of the finalists have fruitful careers ahead of them and something tells me that their best is yet to come.

More like this
All The Ways You Can Watch The Super Bowl In The UK
By Asyia Iftikhar and Darshita Goyal
'Bachelorette' Vet Clare Crawley Revealed Her Stunning Wedding Photos
By Stephanie Topacio Long
The 2023 Super Bowl Commercials Feature A 'Breaking Bad' Reunion & Missy Elliott
By Alyssa Lapid
Twitter Is Shook As Tom Brady Holds Back Tears Announcing His 2nd Retirement
By Marina Watts
Get Even More From Bustle — Sign Up For The Newsletter
From hair trends to relationship advice, our daily newsletter has everything you need to sound like a person who’s on TikTok, even if you aren’t.