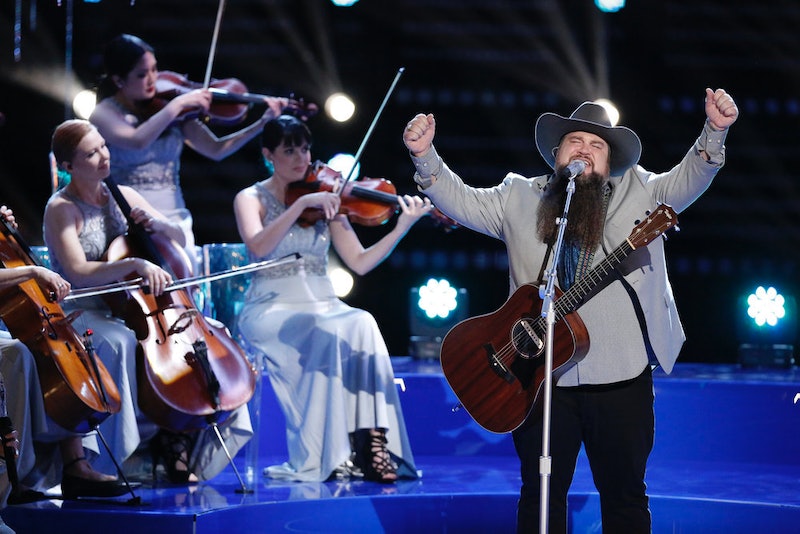 Another season of The Voice has come to an end, leaving us fans with a bit of emptiness as we await a new season (it starts in February, in case you were wondering). But don't fret fellow The Voice lovers, there are other things to look forward to in the off-season. We have lots of former winners albums to listen to and we can certainly speculate when the new The Voice winner's, Sundance Head, album will be released. But another big event to look forward to is Sundance Head's first tour, which could be coming sooner rather than later.

The Voice hasn't planned a tour since 2014 and doesn't seem to have any plans for one in the near future, but that doesn't mean Head has to sit around until the show decides to plan one. The Team Blake winner does have his own music now, after all. While a tour doesn't seem likely until Head releases an album, it could come very soon after.

Best case scenario: Head walks off The Voice stage and gets right to work on his new album, having it ready for a late-March, early-April release date. If this really does happen (and I hope it does), the country artist could be touring as soon as this summer. Attending his first tour would be an amazing way to kick off concert season, if you ask me.

But if that extremely optimistic scenario doesn't happen and Head releases an album in the traditional six months, releasing new music by mid-June, we could expect a tour by the end of 2017. This is probably a more accurate scenario. Head needs some time to unwind, reset, and spend time with his young family before he jumps right back into the recording studio. Still great timing for a tour, though, if you ask me. It gives us all a year to anticipate and obsess over the sure-to-be-amazing new hits Head is writing—hopefully with celeb collaborations with the likes of his coach, Blake Shelton, and maybe even KISS. In the meantime, we'll have another season of The Voice to distract us. If that's not enough, just keep replaying Head's new single—his tour will come soon enough.

More like this
Twitter Is In Awe Of Taylor Swift’s “Lavender Haze” Music Video
By Jake Viswanath
Cruz Beckham Teased New Music With An Adorable Nod To Mom Victoria Beckham
By Stephanie Topacio Long
8 Easter Eggs From Taylor Swift's “Lavender Haze” Music Video
By Shahed Ezaydi
Zach Gilford Admits He Forgot Taylor Swift's Name When He Starred In Her Music Video
By Jake Viswanath
Get Even More From Bustle — Sign Up For The Newsletter
From hair trends to relationship advice, our daily newsletter has everything you need to sound like a person who’s on TikTok, even if you aren’t.