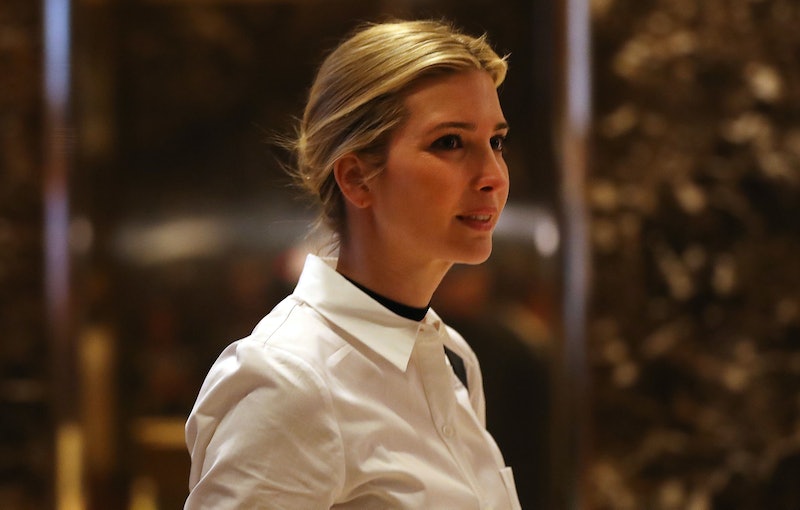 As the transition team for President-elect Donald Trump continues to announce its appointments, questions still loom large about what role Trump's family will play in his administration. Trump's wife, Melania, has already indicated she plans to continue living at the couple's Manhattan residence until at least Spring 2017, when her son Barron completes his school year. But what about Trump's influential eldest daughter, Ivanka? At one point, the president-elect had suggested that she might help her brothers manage their father's multi-national business ventures, but there's always the possibility Ivanka Trump could act as defacto first lady too. Though rumors that she was allegedly taking over an office historically saved for the first lady have emerged, the Trump team has firmly refuted them.

Just two weeks after The New York Times reported that Ivanka could become one of the most influential first daughters in history, CNN's Lisa Mirando shared a report on Dec. 14 from her colleague Sara Murray (who covered Trump on the campaign trail) alleging that Team Trump was preparing to transform the White House office space usually reserved for the first lady into a space for the future first daughter.

A spokesperson with Trump's transition team shot down that report the same day it emerged, but did not offer additional details about what role, if any, Ivanka would be playing in her father's administration.

"This is false," Trump spokeswoman Hope Hicks told D.C.-based blog The Hill. "No decisions regarding Ivanka's involvement have been made."

Still, Ivanka and her husband, New York Observer publisher Jared Kushner, announced on Dec. 5 that they are planning to move to Washington, D.C., according to CNN. It's worth noting that federal anti-nepotism laws prevent a president (or president-elect) from hiring any of his relatives for paid jobs in the administration. This prohibition also applies to Kushner, considered a top adviser, since he is Trump's son-in-law. Nevertheless, the president-elect said on Dec. 11 that he would "love" to have his daughter and her husband as part of his administration. And it might be possible for the president-elect to bring his daughter and her husband on-board, as long as they don't accept payment for their work, notes CNN.

Ivanka's ever-presence at her father's side has already raised some eyebrows in Washington, most notably when a leaked photo showed the Trump Foundation executive vice president sitting in on a post-election meeting with Japanese Prime Minister Shinzo Abe.

And while there isn't much precedent for the daughter of a president potentially playing a significant role in a presidential administration, nearly all of Trump's decisions since his shocking electoral victory have been far outside the playbook of "politics as usual."