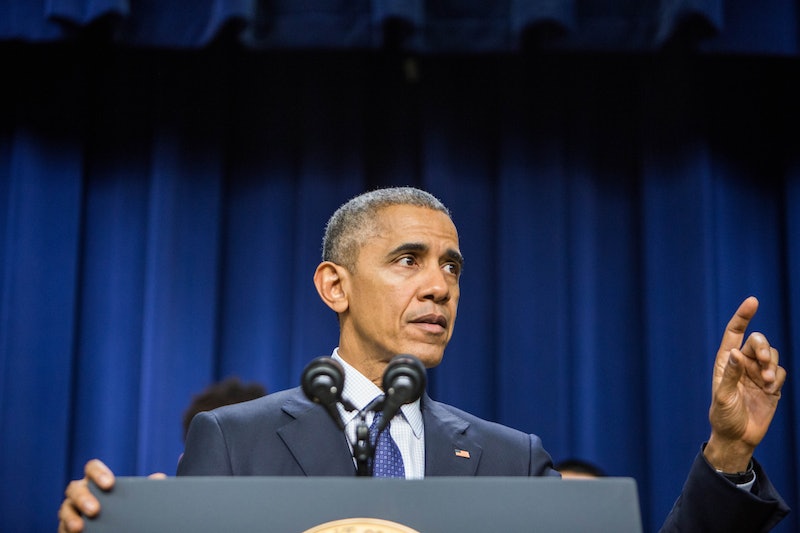 Now that the election is over, many are speculating that Russian hackers intervened in the 2016 election, with the specific goal of electing Donald Trump. If that's revealed to be true, the question is: What is President Barack Obama going to do about it? With a matter of weeks left in office, the 44th President has already ordered U.S. intelligence agencies to compile a comprehensive report about the extent and specifics of Russian-led hacking of the Democratic National Committee and top aides to Hillary Clinton, to be completed before Inauguration Day. But can Obama take concrete action before he becomes a former president on Jan. 20, 2017?

As with most things in politics and international conflict, there is no single, simple answer for how, exactly, Obama should respond to Russia's meddling. But even in the final days of his term, Obama is still the Commander-in-Chief, and could, in theory, order a physical or cyber counter-attack on Russia. But the odds of that happening are essentially zero, especially weeks before an administration that's much more friendly to Russia occupies the White House. So what options does that leave a so-called lame duck president at the end of two successful terms in office?

Obama can still respond to Russian interference in a way that's thoughtful, measured, and takes into account the ideological differences between the incoming administration and Obama's. As Bloomberg suggested, Obama should declassify all information about the hacks that he can, arming the American people (and journalists) with as full an accounting of Russian intervention as possible. By doing this, Obama could deal a serious blow to the "post-fact" culture that seems poised to reign supreme in a Trump White House.

This way the public discourse can be based upon facts instead of whispers. Democrats in Congress, with the support of a growing number of Republicans, are already talking about a multi-year independent study. Far better for us all to immediately see a detailed report laying out what the Russians did in the last year.

The business site went on to suggest that Obama and U.S. intelligence agencies should respond in kind to Russia's hacking by sharing some of its own research — particularly about Russian President Vladimir Putin's finances. The three-time president of Russia reportedly accepts a salary equivalent to $110,000 USD, according to Bloomberg, but most experts believe the former KGB agent is worth much more, and has scores of cash stored in off-shore bank accounts. Bloomberg columnist Eli Lake offered a hypothetical:

Obama should declassify dossiers of Putin's and his inner circle's fortune: their front companies, their homes, their yachts, their secret bank accounts. If he's feeling puckish, Obama could tell his administration to anonymously post all that information on random public websites. He could say the CIA was hacked. Oops. Sorry, Vladimir. Our cyber security is a mess right now.

In fact, NBC News reported on Dec. 14 that senior intelligence officials are preparing a "clandestine" cyber-attack designed to "embarrass" and "harass" Kremlin officials. Unnamed White House officials reportedly asked the CIA to prepare documents on high-ranking Russian officials, though details about the information that U.S. intelligence agencies have on the Kremlin remains classified. Similarly, unnamed sources and former intelligence officers told NBC News that the CIA had "gathered reams of documents that could expose unsavory tactics" by Putin.

On the more diplomatic end of the spectrum, Obama could also utilize an executive order he signed in April 2015 intended to discourage hacking and cyber-crime. The order gives federal agencies greater leeway to investigate such crimes, and establishes rules for economic and travel sanctions that can be levied against known perpetrators. Framed as a new tool to combat cyber attacks, the White House information page on the order explains that the executive order "authorizes the Secretary of the Treasury, in consultation with the Attorney General and the Secretary of State, to impose sanctions on those individuals and entities that he determines to be responsible for or complicit in malicious cyber-enabled activities that are reasonably likely to result in, or have materially contributed to, a significant threat to the national security, foreign policy, economic health, or financial stability of the United States."

Certainly, Russia's alleged meddling in the 2016 election would meet those guidelines, but the executive order has yet to be used, and it's unclear if Obama will utilize it during his final weeks in office until we know for sure that there was hacking. Like all executive orders, President-elect Trump could also overturn the at any time after he assumes the office.