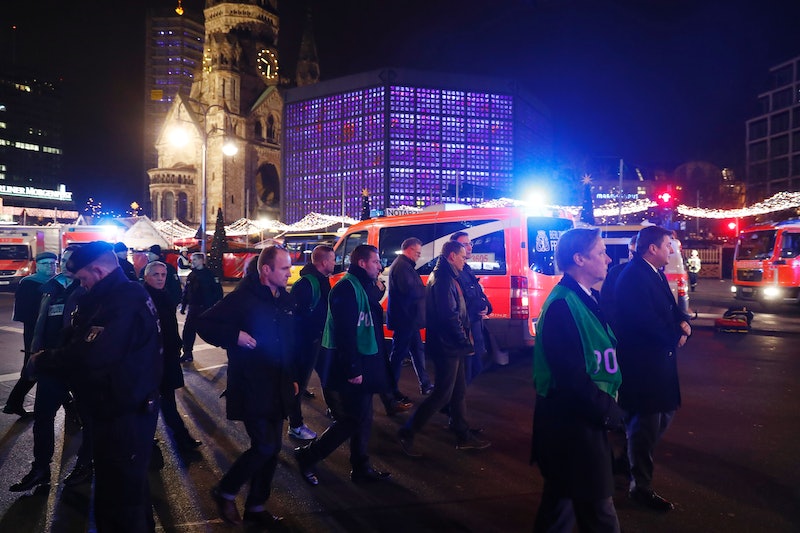 A semi-truck plowed through a crowded outdoor Christmas market in Berlin on the evening of Dec. 19, killing several people and injuring more than 50 others. German news outlet Der Spiegel reported that police confirmed a death and multiple injuries, but were initially not yet sure whether the Berlin Christmas market crash was intentional or an accident. However, soon after, the BBC reported that police said they believe the attack was deliberate. Update: On Monday evening, Berlin police raised the death toll to 12.

That allegation seems to be backed up by a shopper's tweet from the scene which noted "There is no road nearby." The truck hit several stalls and shoppers patronizing the Breitscheidplatz Christmas market outside Berlin's famous Kaiser Wilhelm Memorial Church, according to the BBC.

The same shopper, British journalist Emma Rushton, spoke with CNN shortly after the incident, reporting that she was approximately eight feet from the truck as it plowed through the crowd, and that the truck showed no signs of slowing down as it ran over people and stalls.

Roughly an hour after reports of the incident began pouring in, Berlin police reported that "a suspicious person" had been arrested near the scene, though it was unclear whether that suspect was the driver of the truck. Shortly thereafter, police confirmed that a passenger, sometimes identified as the truck's "co-driver," had died in the crash.

Police in Berlin have asked residents to "help us" by staying home and not spreading "rumors," and to protect the privacy of victims by not sharing videos of the incident. Earlier tweets urged locals to keep the roads around the market clear for police and emergency vehicles.

If the incident is indeed a targeted assault, it echoes the July attack on revelers celebrating Bastille Day in Nice, France, in which 86 people were killed when a 31-year-old man drove a rented truck through the massive crowds, according to the BBC.

The White House's National Security Council (NSC) issued a statement Monday evening addressing the attack and expressing condolences for those who lost family members, and the entire nation of Germany.

"The United States condemns in the strongest terms what appears to have been a terrorist attack on a Christmas Market in Berlin, Germany, which has killed and wounded dozens," read the statement from NSC spokesman Ned Price. "We have been in touch with German officials, and we stand ready to provide assistance as they recover from and investigate this horrific incident. Germany is one of our closest partners and strongest allies, and we stand together with Berlin in the fight against all those who target our way of life and threaten our societies."

It's worth noting that in November, the U.S. State Department issued a travel advisory specifically warning about the potential for terrorist attacks at holiday gatherings in Europe. Although the alert did not specifically mention Christmas markets (a tradition across many Anglo cultures), it did caution travelers that "credible information indicates the Islamic State of Iraq and the Levant (ISIL or Da'esh), al-Qa'ida, and their affiliates continue to plan terrorist attacks in Europe, with a focus on the upcoming holiday season and associated events."

At press time, no individual or organization had yet claimed responsibility for the attack in Berlin.