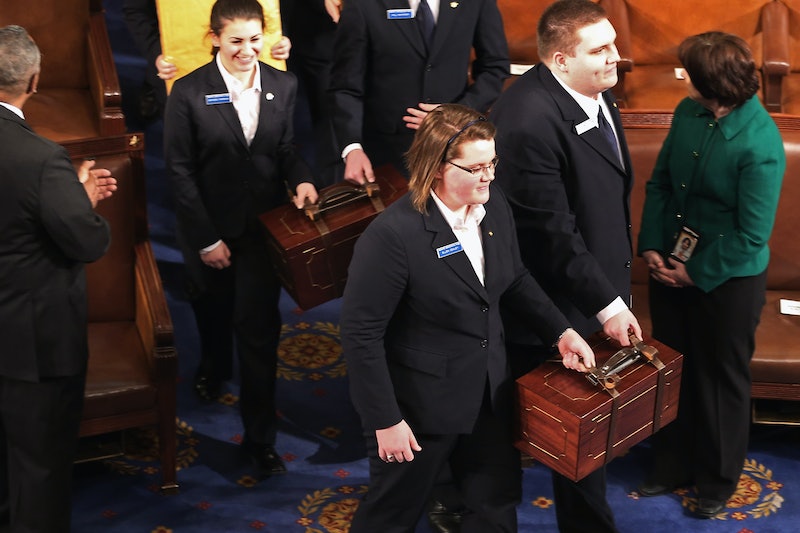 Well, he more than passed the magic number. On Monday, Donald Trump won 304 Electoral votes to Hillary Clinton’s 227 (with 7 electors defecting from their pledges) officially guaranteeing his ascendancy to the White House in January. Right? Well almost: the official declaration of Trump’s victory won’t be made until Jan. 6, 2017, when the President of the Senate (you might know him better as Vice President Joe Biden) opens all the electoral votes — which are sent from the states on Certificates of Ascertainment or Certificates of Vote — and counts them. But can Certificates of Vote be rejected? Technically, yes, but don’t expect too much drama — such rejections are very rare.

Federal law provides a method for lawmakers to challenge a state’s Certificate of Vote: the complaint must be made in writing, and must be signed by at least one U.S. senator and one member of the House. The last time this happened was in 2005, when Democrats challenged the Ohio results, citing widespread problems at the polls on Election Day 2004. After such a challenge is made, both Houses separately debate the complaint, and after two hours, vote on whether or not to accept the results. The 2005 challenge was defeated, 267 to 31 in the House and 74 to 1 in the Senate.

Still, given the controversial nature of this election, it’s possible that we may see some challenges, though whether they’d be able to get the requisite signatures from both a House Representative and Senator is uncertain. Such was the case during the counting of the votes in 2001, as documented in Michael Moore’s Fahrenheit 9/11, when a number of African American congressman attempted to challenge the results, but lacking a Senator’s signature, were told “to sit down and shut up,” as Moore put it.

California Democrat Barbara Boxer, the Senator who signed the complaint in 2005, reflected on her decision not to throw her support behind the objecting Congressmen and women in 2001. “I was asked by Al Gore not to do so,” Boxer said in 2005 before lodging her challenge. “Frankly, looking back, I wished I would have. It was not about Al Gore. It was about the voters.”

Possible challenges this year could arise over any number of issues, and with left-leaning Democratic senators like Elizabeth Warren and Bernie Sanders having risen to power, they might initiate a challenge for symbolic reasons.

Considering that both houses of Congress are controlled by the Republicans, the chances that any state's’ Certificate of Vote will be rejected are pretty remote. Still, considering that this has been a pretty strange election already, it’s probably not a bad idea to check your newsfeed on Jan. 6 to make sure the country is still there.