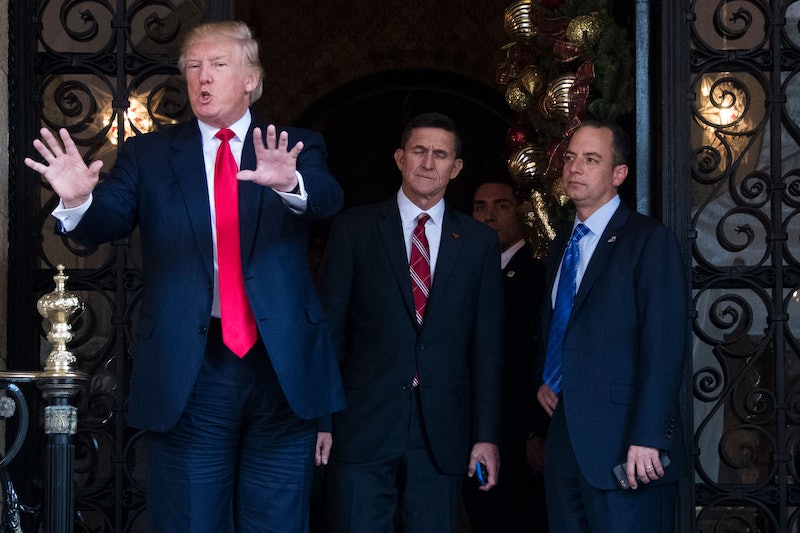 President-elect Donald Trump held a brief, impromptu press conference outside his estate at Mar-a-Lago in Palm Beach, Florida, on Dec. 21. The interaction, which was less than five minutes long, marks the first time since winning the election that Trump has made himself directly available to reporters. But even so, Trump steered the conversation in the direction he wanted it to go, using a question about the possible terrorist attack at a Berlin Christmas market as an opportunity to proclaim, again, that he was "100 percent correct" about the danger of what he proudly calls "radical Islamic terrorism."

During the brief exchange, Trump remained resolute in his support for a ban on Muslims entering the U.S. and a mandatory national registry for Muslims. Asked if the Berlin attack prompted him to "reevaluate" his campaign positions, Trump was characteristically blunt, suggesting that he already has all the intelligence he needs to serve as leader of the free world. (Maybe that's why he's reportedly refusing security briefings from government officials?)

"Hey, you've known my plans all along and it's, they've proven to be right," Trump said. "100 percent correct. What's happening is disgraceful."

For the record, German authorities believe the attack was intentional, and have a Tunisian man in custody, but have not definitively deemed the deadly attack an act of terror. And though Middle Eastern terror group ISIS claimed responsibility for the attack, there is still some doubt about whether the suspected driver was operating on orders from the self-proclaimed caliphate.

This isn't the first time Trump has used a deadly attack to give himself kudos about being "right" on so-called radical Islam. Just hours after a man opened fire inside Pulse nightclub in Orlando, Florida, killing 49 people and wounding more than 50 others, Trump tweeted a bizarre message that sounded an awful lot like a humblebrag, rather than any hint of condolence for the lives lost in the worst mass shooting in modern American history.

Outside Trump's Florida estate on Wednesday, the President-elect took a few questions from reporters, but then pushed back when a female reporter cited his own press release framing the Berlin incident as an attack on Christians. In that statement, which is still available on Trump's website, the President-elect claimed that "ISIS and other Islamist terrorists continually slaughter Christians in their communities and places of worship as part of their global jihad."

But when the reporter asked Trump about his own suggestion that the attack was anti-Christian, the President-elect interrupted her, implying that she was making up quotes. "Who said that, when did— when was that said?" Trump asked brusquely. "I believe you said it in a press release," the reporter said.

Trump's tone — and the abrupt end to an unscheduled press availability — are unfortunately par for the course of his campaign and, in all likelihood, his presidency. During the campaign, Trump openly reviled members of the media, promised to "open up our libel laws" to sue outlets that published unflattering stories, and even encouraged his supporters at rallies to join him in harassing reporters sequestered in the press pit. During his post-election "thank you tour," Trump has shamed the "extremely dishonest media." As Mediaite notes, Trump has not held a regular press conference since July. NPR reports that, at time of writing, it's been a full 146 days since Trump last held a press conference. In that same period, though, he's tweeted more than 1,400 times.

Trump even cancelled a press conference scheduled for Dec. 15 where he was supposed to address how he will divest from his global businesses to eliminate the numerous conflicts of interest that exist. That press conference happened to fall one day after news broke that American intelligence agencies concluded Russia (at the direction of president Vladimir Putin) interfered in the American election with the intention of helping Trump win.

Claiming that Trump needed more time to focus on selecting his cabinet, the Trump transition team cancelled the press conference. Later that day, Trump appeared in the lobby of Trump Tower with Kanye West after a meeting in which they discussed "life" and "multicultural issues."

It appears Trump may already be running out of tricks to block media access, as the transparent Kanye appearance demonstrated. Even when Trump does engage with members of the press, it's clear he intends to continue his hostile attitude — even when reporters accurately quote his own words back at him. That means that South African journalist Nic Dawes was strikingly prescient when warning American journalists that under a Trump administration, we must prepare "for the end of access as we know it."

More like this
Watch Jacinda Arden’s Devastatingly Honest Resignation Speech
By Sam Ramsden
6 Organizations Fighting Police Brutality That You Can Support Right Now
By Syeda Khaula Saad and JR Thorpe
This Is When Netflix Is Going To Start Charging You For Sharing Passwords
By Darshita Goyal
What The UK Blocking Scotland’s Gender Recognition Bill Means
By Sam Ramsden
Get Even More From Bustle — Sign Up For The Newsletter
From hair trends to relationship advice, our daily newsletter has everything you need to sound like a person who’s on TikTok, even if you aren’t.