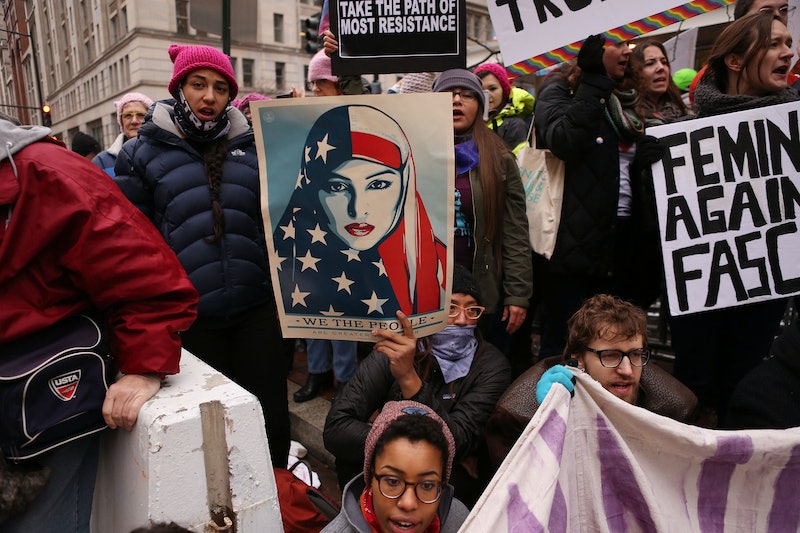 On Jan. 21, around 200,000 people are expected to descend on the nation's capital for the Women’s March on Washington, with thousands more participating in sister marches across the country, and the world. There are many reasons why people are marching in the Women's March, but its main mission is clear — marchers are participating to demand equal rights for women, people of color, the LGBTQIA+ community, and people living with disabilities.

The Women’s March on Washington began as a simple Facebook page created by a retired attorney in Hawaii as a way to protest President Donald Trump’s election to office. It has since spread like wildfire across the internet, garnering support from a diverse group of men and women who feel a number of civil rights issues need to be addressed in the United States. Organizers say the march is meant to send a bold message to the Trump administration on its first day in office.

Organizers also say the march is much bigger than Trump. "This effort is not anti-Trump. This is pro-women. This is a continuation of a struggle women have been dealing with for a very long time. In this moment, we are connecting and being as loud as possible." National Co-chair of the Women's March, Tamika D. Mallory, said during an interview with NPR.

Here are six things people will be marching for during inauguration weekend, and how the Trump administration stands on these issues:

President Trump has promised to repeal the Affordable Care Act, but hasn’t made a replacement plan available yet, so we will have to wait to find out just how birth control access will be affected. Similarly, Trump’s pick for Health Secretary, Tom Price, offered no more clarity at his confirmation hearing last week.

Trump has threatened to repeal the 1973 Supreme Court decision allowing legal abortion in the U.S. At least 46 anti-abortion bills have been introduced or are pending in 14 states since state legislatures came back in session this month.

Lawmakers introduced more than 200 anti-LGBT bills in 34 states in 2016. At least 50 of those bills targeted transgender people specifically.

In just the first month of 2017, more than five states already have plans to pass their own anti-trans laws, according to the American Civil Liberties Union.

One of the central issues with Trump is his record on demeaning women. Before he was elected, the president called women pigs and dogs, and was caught on tape boasting about non-consensual sexual behavior.

Sexual assault remains one of the greatest threats to women, especially those in college. One in five women are sexually assaulted while in college, according to the National Sexual Violence Resource Center. The Department of Education, under Obama’s administration, launched a campaign to combat sexual assault in schools.

President Trump’s pick for Education Secretary, Betsy DeVos, dodged questions at her confirmation hearing about whether she would uphold these Title IX initiatives.

Every nine seconds in the U.S. a woman is assaulted or beaten. And on a typical day, domestic violence hotlines nationwide receive approximately 20,800 calls, according to data by the National Coalition Against Domestic Violence.

Women make, on average, only 80 cents for every dollar earned by men, with an even bigger gap for women of color. The wage gap typically translates into more than $10,000 per year in lost earnings for women.

A long list of influential people are expected to speak at the march, such as civil rights activist and feminist scholar Angela Davis, feminist activist and author Gloria Steinem, political commentator Van Jones, the mothers of Trayvon Martin and Eric Garner, and actress America Ferrera, to name a few. While it remains to be seen if the march will have an immediate impact on Trump and his administration, it's certainly a starting point, and it serves as a powerful reminder that people are not going to stop fighting for visibility and equality.