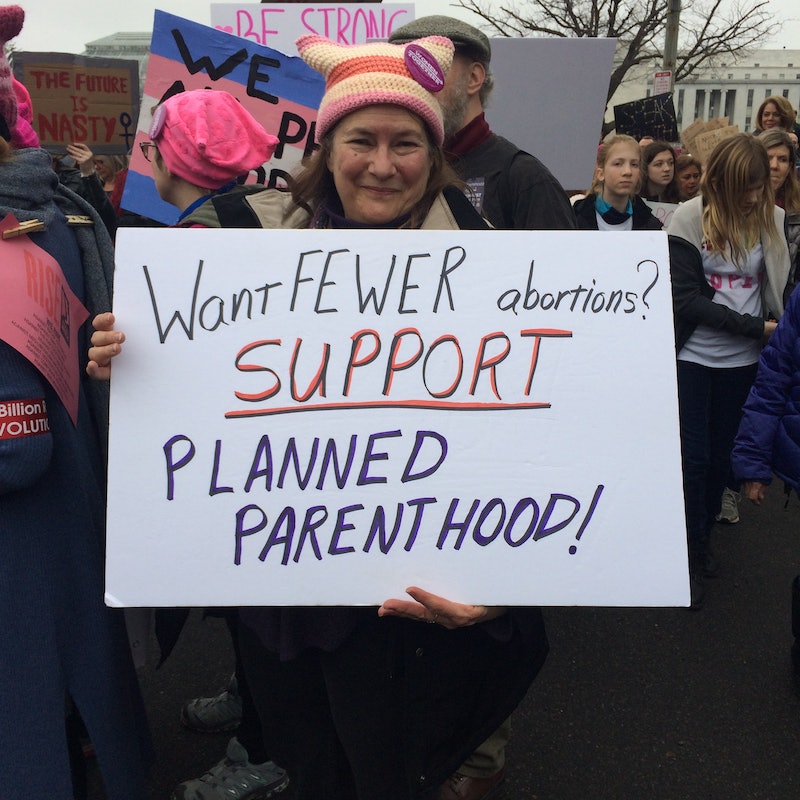 It's no surprise that women’s health is already one of the first targets of a Donald Trump-Mike Pence administration and a Paul Ryan Congress. The attacks on women’s rights — and especially our reproductive rights — have been building and intensifying over the past several years, bubbling up from state legislatures and boiling over in acts of shocking violence at abortion clinics, congressionally-approved witch hunts on Planned Parenthood, and promises to stack the U.S. Supreme Court with anti-abortion justices who want nothing but to set us back.

It feels like dark times for supporters of reproductive rights, health, and justice. Indeed, the threats are real. But so is the passion and energy to reignite a broad-based, grassroots-led, intersectional movement committed to changing policy and changing culture to better support women and advance our rights. From the millions who marched on Saturday (not only across the United States but the globe), to the groundswell of support for protecting Planned Parenthood and Obamacare, women everywhere are rising up.

The fight to protect Planned Parenthood is one of the first, and will set the stage for the hard work we will need to do over the next four years. We all know that when politicians attack Planned Parenthood and other abortion care providers, they are doing so as part of a larger agenda to take away women’s health care, an agenda that will harm millions of women and families. An agenda that seeks to shame and punish us all for our reproductive health care decisions. But we won’t be shamed, and we won’t be punished. Each of us should be able to make decisions about our reproductive health care with dignity and respect —and without politicians interfering.

Our job will be to make sure members of Congress hear us and that we create a political firestorm so fierce that they learn to keep their hands off our health care.

Planned Parenthood is one of our nation’s leading providers of high-quality, affordable health care for women, men, and young people, and the nation’s largest provider of sex education. About one in five women has relied on a Planned Parenthood health center for care in her lifetime. If Congress “defunds” Planned Parenthood, whether by blocking it from the Medicaid program or from Title X grants, women and families will suffer.

Our job will be to make sure members of Congress hear us and that we create a political firestorm so fierce that they learn to keep their hands off our health care.

Start with your members of Congress. If they are supporters of women’s health care and Planned Parenthood, they need to hear from you. They need your support to keep standing up. Call them, tweet them, write them and say thank you. Write a letter to the editor of your local newspaper and commend them. Call them some more. Support them. Show up at their events in your community – town halls, local events, their district offices. Be there. Washington can feel far away and overwhelming, so remember that all politics is local. Seek out resources like the new Indivisible Guide for pointers.

There is legacy in our country to organize and resist—and the time to act is now.

If your ,embers of Congress don’t support Planned Parenthood, do everything already mentioned but do it even more. Organize. Loudly. Ask your local reproductive health care provider what they need from you and how to help. Work with other leaders in your community — mayors, doctors, local business owners — to do the same.

We’re already seeing how organizing can work. Congress has tried to gut the ethics office, but faced an immediate backlash that thwarted their plans. Supporters of the Affordable Care Act are storming local offices, causing at least one Congressman to make embarrassing headlines for leaving his own meeting early to avoid talking to his constituents who support Obamacare.

There’s no quick fix to protecting our rights and our healthcare during this dangerous new national landscape. But there is legacy in our country to organize and resist—and the time to act is now.