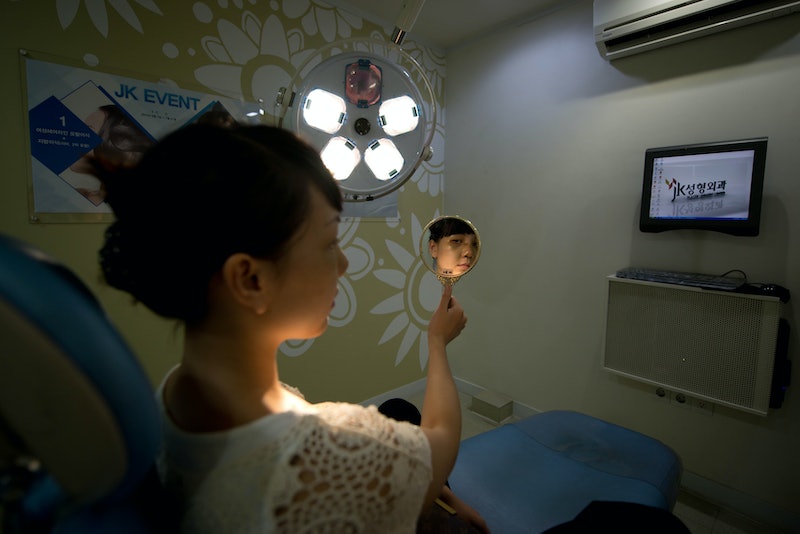 We've known about South Korea's plastic surgery obsession for a while now, but the details just keep getting more and more incredible. Because South Koreans are themselves such enthusiastic and discerning consumers of plastic surgery services, the country's plastic surgeons have become some of the best in the world, and medical tourists travel to South Korea to partake in the fun. Well, maybe too much fun — some patients apparently come out from under the knife literally unrecognizable as their former selves (and as their former passport photos). So, surgeons have started furnishing patients with "plastic surgery certificates" to help get them back home through passport control, especially in China.

There are some before and after photos floating around online and, if they are real (a biiiig if, in my opinion) a passport-checking bureaucrat could be forgiven for not immediately recognizing at least some plastic surgery patients from their previous photos. Though many Asian women choose just to have "the basics" done, especially their eyes, some are choosing full-on facial transformation. Daily Mail and Kotaku are using the below photos to accompany this story, though no word on if they are legit.

Especially in these drastic cases, is plastic surgery an empowering individual choice, or just another (more invasive, more permanent) way that to comply with society's demands that we conform to its standards? Hard to say. It's more morally questionable when parents force their children to have cosmetic surgery, as then they're stuck with the results for the rest of their lives.

On the other hand, when such procedures become widespread, it does sort of level the attractiveness playing field and reduce stigma associated with those procedures, which is good especially for people who stand to benefit from them more than others. So do what you want with your face, but make sure you pick up your "plastic surgery certificate" on the way out.