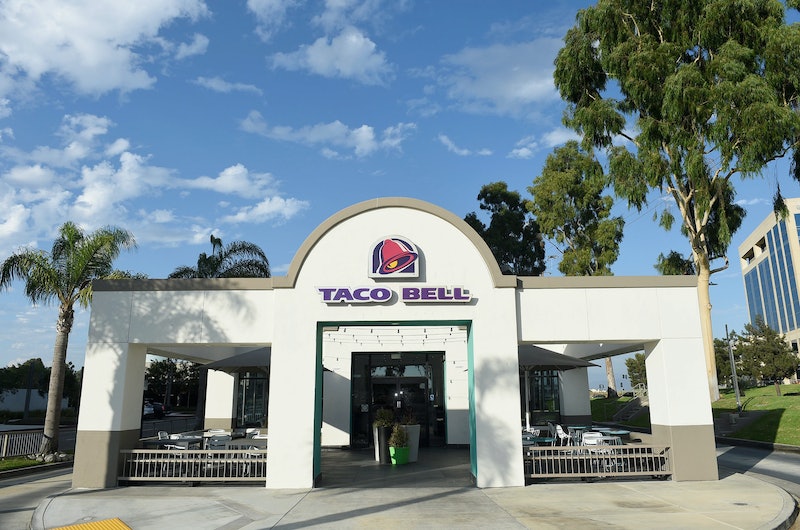 Just when you thought the hype had died down about the popular Mexican food chain, now Taco Bell is launching a restaurant chain called U.S. Taco Co. and Urban Taproom that is essentially a more classy version of the original. Three cheers for America, everyone.

According to Kitchenette, the menu will include items such as the "Winner Winner," a fried chicken breast and gravy, and the "One Percenter," with fresh lobster and garlic butter, cabbage slaw, and pico de gallo. I'm sure the real "one percenters" will gladly pass up that said snack. Please spare me the wit, Taco Bell. Now you're just getting pretentious.

Greg Creed, CEO of Taco Bell, said this food baby was "born of a segmentation study conducted on Taco Bell that revealed a fairly large demographic that was not likely to use quick-service restaurants at all." Yes, because they can afford to, ahem, live más.

Creed went on to say they "decided to design a new concept that would appeal to that demographic, which includes an eclectic mix of generally higher-income foodies who are 'edgy in how they live their lives but not necessarily in how they eat.'"

Moral of the story: Taco Bell has become too mainstream, we are literally feeding hipster culture, and I need to go wipe my running mascara off my face because this is just hilarious. I admire the innovation, but Taco Bell should just stick to their tacos.

More like this
An Expert Weighs In On The Viral Raw Carrot Salad Trend
By Alexis Morillo
16 Trader Joe's Appetizers That Are Total Party-Pleasers
By Kaitlyn Wylde
Dolly Parton Released 4 New Baking Mixes With Duncan Hines
By Alexis Morillo
Learning To Love, Not Judge, The Lunchbox Wives Of TikTok
By Esther Zuckerman
Get Even More From Bustle — Sign Up For The Newsletter
From hair trends to relationship advice, our daily newsletter has everything you need to sound like a person who’s on TikTok, even if you aren’t.