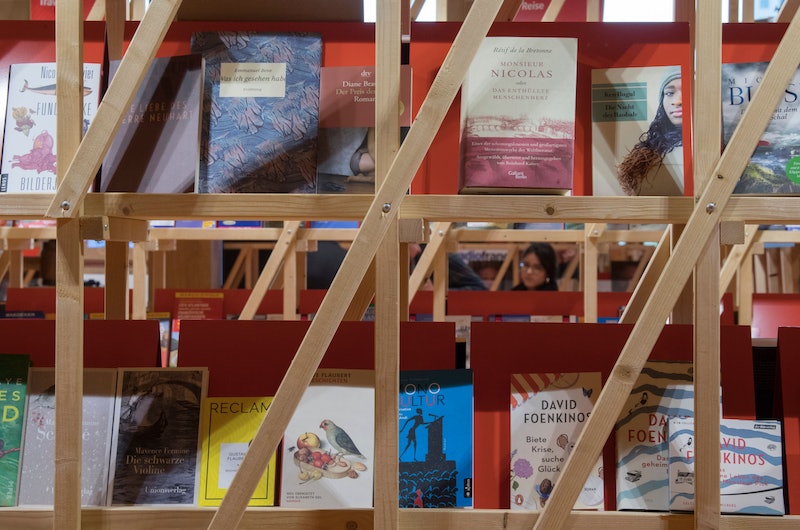 Some writers successfully stun the literary world with their debut novels. Zadie Smith did it with White Teeth, Toni Morrison with The Bluest Eye, and J.D. Salinger with The Catcher in the Rye. Other writers, however, like the now ever-famous F. Scott Fitzgerald and William Faulkner, don't achieve such instantaneous success. Their initial works are stops along the way to literary acclaim, and when these writers gain their notoriety, their debuts seem long in the past.

But these first ventures are still worth the read. Debuts can offer interesting insights into the early minds of these legends and illuminate the origins of their interests. If you start from the beginning you can trace your favorite writer's evolution as an artist and witness the maturation of her style and voice. Plus, if you're suffering from writerly withdrawal awaiting a forthcoming novel, debuts also provide some extra reading material.

Below are 11 female writers and the debuts they composed before they became household names. Some of these writers are already epic legends, others are quickly rising, destined to secure their places in the literary hall of fame. What they have in common? Each has a debut novel worth reading.

In her late 70s, Joan Didion is undeniably a literary legend, admired by journalists and writers everywhere. As a journalist, she was a master of the fly-on-the-wall observational technique and a pioneer of new journalism. As a novelist and memoirist, she was and is a raconteur of brutal truths, comical candor, and painful memories.

Didion’s signature nuance and wit, which have been hailed by so many over the course of her work, are present from the very first pages of her debut novel Run River. Run River provides a critical portrait of life in rural California through the painful unraveling of a marriage irrevocably marred by murder and betrayal. Though Didion later critiqued the novel's "false nostalgia" in an essay published in her collection Where I was From, Run River is a poignant, thrilling debut. Passionate, but not sentimental; moving, but not melodramatic; dark and lyrical without being superfluous, it is classic Didion, though not yet fully matured.

2. Lydia Davis: The End of the Story

In her 30-plus years as a writer Davis has become famous for defying and redefining the laws of storytelling. Her hodgepodge writing collections never fail to transcend categorization.

Already a prizewinning short-story writer, Lydia Davis decided to try her unconventional storytelling hand at novel writing in 1994. Her first venture, The End of Story, is indeed an intriguing one. Davis' protagonist is a middle-aged woman who, in the aftermath of a failed love affair turned obsession with a much younger man, commences an attempt to write a novel about the experience as a therapeutic experiment of sorts. The bold, unconventional novel is filled with amusing self-mockery and candid contemplation. It’s a long form exhibition of the bold style and sparse prose that had already begun to captivate readers in her shorter writings.

A novelist, poet, short story writer, essayist, and environmental activist, Margaret Atwood is a multi-talented Canadian icon. Though she's best known for her early novel The Handmaid’s Tale, she went on to write the highly popular dystopian novels Oryx and Crake and The Year of the Flood. Atwood first emerged on the literary scene as a poet, however, and her poetry frequently focused on the psychological complexity of female protagonists, often dealing with grief, loss, and thoughts of impending mortality. These themes later remained prevalent in her works as a novelist, along with themes of dystopia and environmental disaster that came to frequent her later novels.

In her debut novel The Edible Woman, considered an early feminist work, Atwood exhibits an acute ability to articulate the female experience and explore gender roles in a manner tinged with irony and metaphor. Marian, the novel’s protagonist is a young woman, recently married, who starts to endow food with humanlike qualities. As she begins to identify with her cuisine she loses her appetite, fearing metaphorical cannibalism. Soon Marian’s sense of self and the world around her begins to unravel.

Joyce Carol Oates has maintained her reputation as a serious literary novelist for decades, and has written a whooping 40-plus novels, not to mention poetry volumes, short story collections, and plays. With so many works under her belt, her first novel, published way back in 1964, is easily missed by fans. But With Shuddering Fall is worth the read and the obstacle of getting your hands on a copy of the out-of-print work. The debut work displays early signs of Oates' later preoccupation with violence, domesticity, and the moral and intellectual decline of American society. Innovative, complex, and allusive, Oates novels are infused with social commentary on contemporary American life, and it's an intriguing adventure to explore where it all began.

Alice Walker, the American southern writer and activist, will never live down the notoriety she earned with The Color Purple, the tragic and provoking epistolary novel about African American teen Celie and her search for self-empowerment and sexual liberation in 1930s Georgia. The Pulitzer Prize-winning novel has been adapted several times over for the screen, the stage, and the radio.

Her debut novel The Third Life of Grange Copeland too is a powerful, heartfelt novel that chronicles the tragic and inspiring struggles and triumphs of African Americans in the early twentieth century rural south. In The Third Life of Grange Copeland, Walker’s protagonist is a male tenant farmer who flees the confines of his home in rural Georgia search of self-liberation in the North only to later return to his family and attempt to mend broken relationships and the chaos that has ensued in the aftermath of his fleet.

6. Anne Tyler: If Morning Ever Comes

Award-winning American author Anne Tyler is as famously prolific as she is reclusive. Her fruitful pen has produced 19 novels, with a forthcoming work A Spool of Blue Thread, but it wasn't until her 9th and 10th novels, Dinner at the Homesick Restaurant and The Accidental Tourist, that she gained mass critical acclaim, and went on to win a Pulitzer for her 11th, Breathing Lessons. With such a copious catalogue, her debut novel seems long in the past, and although it didn't get nearly as much recognition as her later works, it is a worthwhile read.

Tyler's rare, sharp talent is on grand display in If Morning Ever Comes, made all the more impressive because it was written when she was merely 22 years old. It's a charming, astutely observed novel about a twentysomething male who, bored with the monotony of life as a Columbia Law Student, returns to his small, North Carolina hometown to reexamine his path and aspirations. Ben Joe Hawkes' relationships with women — his recently divorced sister, his widowed mother, his nutty grandmother, an old flame, and five more female siblings — play a key role in his rediscovery of self and bring color and humor to the novel. Tyler's debut is an honest, vibrant rendering of family life, aging, and the many facets of love seemingly written by a seasoned author.

Though she’s only written four novels since 1980, the quartet is quite an impressive one. Robinson’s sophomore novel Gilead won the Pulizer for Fiction in 2005. Her religious interests, notably the theological philosophies of John Calvin, have played a key role in her literary works and spirituality is a prevelant theme in all four novels. While her slightly lesser-known, debut novel Housekeeping was nominated for the Pulitzer and didn't win, it did take home the Hemingway Foundation/PEN Award for best first novel.

Housekeeping tells the story of two sisters, orphaned at a young age and raised by a succession of family members, including a rather eccentric aunt, in a small Idaho town. Together the transient pair must search for the necessary ingredients to form a stable, spiritual home, or a sense of one, in the face of their metaphorical homelessness and abandonment.

Annie Proulx, the American journalist and novelist, is best known for her epic short story Brokeback Mountain, which (yep, you guessed it!) was adapted as the Golden Globe and Academy Award-winning film starring the ever so handsome Jake Gyllenhaal and the late, brilliant Heath Ledger, as well as her sophomore novel The Shipping News , which won both the Pulitzer Prize and U.S. National Book Award for Fiction and was also adapted for the big screen.

While these two works are what gained Proulx major critical acclaim, her debut novel too was an award-winning work. Postcards won the 1993 PEN/Faulkner Award for Fiction. In it, Proulx crafts a vivid portrait of early 20th century America as she follows Loyal Blood, a cross-country wanderer who sends postcards home to his family recounting his nomadic experiences as he traverses the American West. The postcards work to introduce each narrative section and rich, naturalistic images, color the novel throughout. In a 1992 review, The New York Times notes, "Story makes this novel compelling; technique makes it beautiful. What makes "Postcards" significant is that Ms. Proulx uses both story and technique to make real the history of post-World War II America."

Indian-American writer Jumpha Lahiri, author of The Lowland , is a master at articulating the immigrant experience, an ability she honed through years of short story writing. With empathy and eloquence, she weaves the struggles and triumphs of her alienated and conflicted characters within a mesmerizing narrative that leaves the reader — immigrant or not — feeling empowered and inspired. Themes of isolation, assimilation, clashing cultures, and conflicting generations frequented her acclaimed short stories, compelling themes that continued on into her novel writing, including her debut novel The Namesake, published in 2003 and adapted as a major motion picture by the same name.

Jennifer Egan cemented her place in the literary landscape with her captivating A Visit from the Goon Squard which won the 2011 Pulitzer Prize for Fiction, but before the prize-winning work that charmed the bookish fleets, Egan published three other rather captivating, realist works: The Invisible Circus, Look at Me, and The Keep.

Set in 1978, in the aftermath of the politically tumultuous 1960s and its groovy idealism, Egan’s debut novel The Invisible Circus is the story of 18-year-old Phoebe O’Connor as she grapples with the death of her older sister Faith, a young, free-spirited hippie who allegedly committed suicide in Italy in 1970 and whose eccentric life and unexpected death are a mystery to Phoebe. The novel follows Phoebe as she zig-zags through San Francisco and later across Europe in search of the truth about her sister and ultimately about herself. Though it has its pitfalls, including a few hard-to-believe coincidences, it is a debut that, like Egan's later novels, is vivid and full of heart.

Donoghue has written an impressive seven novels in the last decade, including her latest work Frog Music published just last month to mixed reviews, but her sixth novel Room was so brilliant it's going to be a challenge for her to top it.

But Stir-Fry, Donoghue’s poignant debut, written more than a decade and a half before Room, exhibits the first signs of Donoghue's masterful ability to articulate complex human emotion. Stir-Fry is a coming-of-age story about coming-out. Seventeen-year-old Maria, a small-town Irish girl, heads to the University of Dublin for college where she discovers her roommates are lesbians. Now liberated from the sheltered bubble of her hometown, Maria's new experiences open her eyes to a wider world and she soon embarks on a topsy turvy journey of sexual exploration and self-discovery.